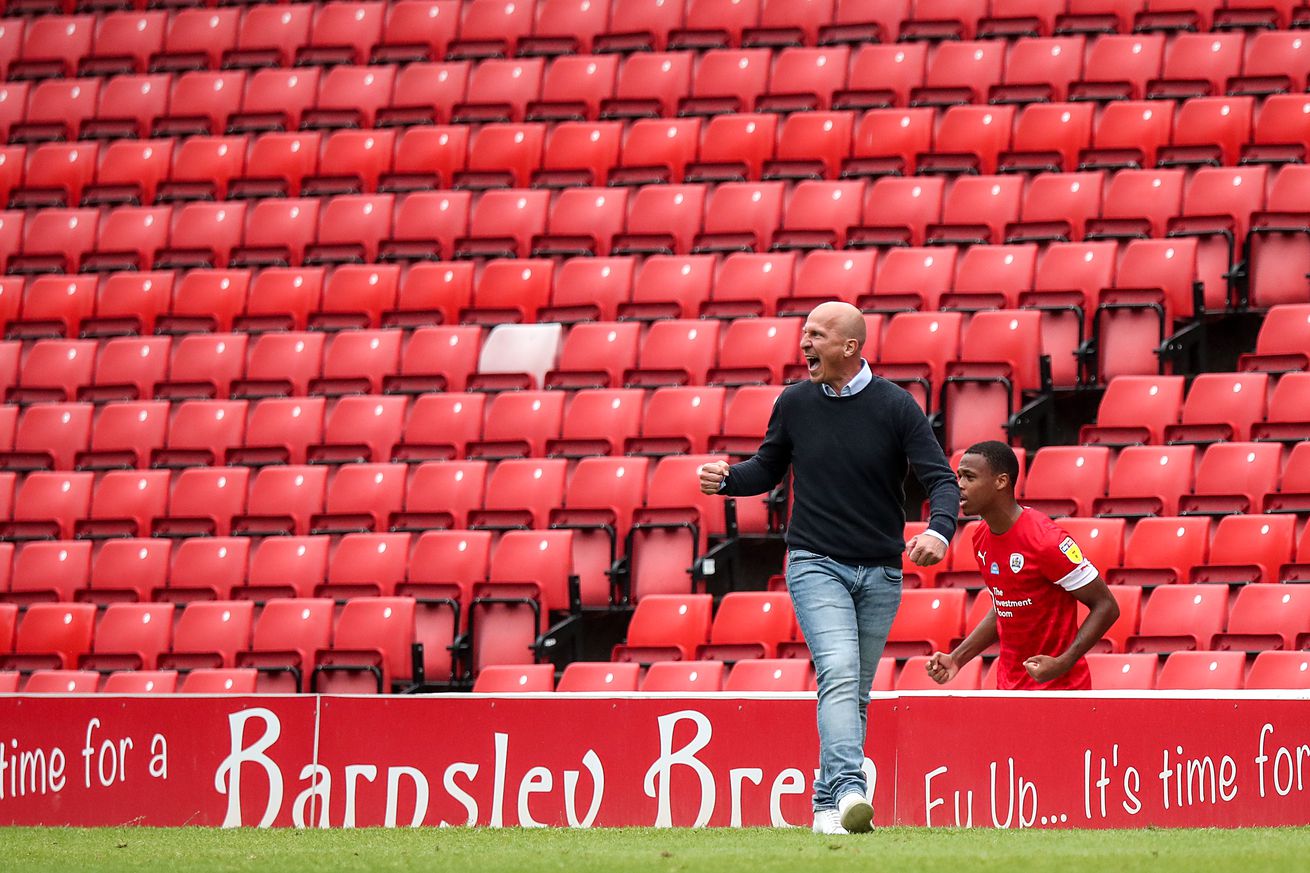 In part two of our week-long analysis of the next Red Bulls boss, we examine his interpretation of the energy in “energy drink soccer”

To be fair, it’s a system with a demonstrated history of success in Major League Soccer, with Jesse Marsch’s infamous desire to play “like an energy drink” leading to two regular season titles over the last five years. As noted by much of the introductory press around his hire by New York, Struber is a fierce adherent of the high press, taking it to every position in his young coaching career so far. Wolfsberger pressed, Barnsley pressed, and the New York Red Bulls will press, possibly more than ever before.

Expect an exhaustive, unrelenting up-tempo defensive style that stretches to every blade of grass. As noted by MLSSoccer.com, his team had more defensive actions than Championship average on every part of the field. In 2019-2020, Barnsley had the most defensive duels, the most interceptions, and the most tackles, despite Struber not taking over until late November.

As evidenced by the formation choices, the system is designed around denying central-lying midfielders advancement. The closely-packed players are already in position to overload the middle and press immediately after losing the ball. According to The False Fullback, Struber’s initial move at Wolfsberger was for the strikers to make outward curling runs and force passes into the bunched middle of the field. If that didn’t happen, the design was to cut off one side of the field to force the opposing team wide, and the entire defensive unit would then shift into that side to press more aggressively through overloaded traps. When forced to the wing, the sideline acts as another defender, cutting down on the potential options for movement. Struber’s emphasis on strikers making angular off-ball runs like this to draw poor passes from the opposing defense shadows an emphasis made by Red Bulls sporting chief Kevin Thelwell in a chapter of his manual on the 3-5-2 formation.

“Instead of attempting to immediately cause turnovers, Barnsley frequently forced opponents backwards”

In its must-read breakdown of Struber’s style of play, celestial tactics website Spielverlagerung notes that instead of attempting to immediately cause turnovers, Barnsley frequently forced opponents backwards, even if obvious passing options were left open. Strikers would run diagonally at ball holders, seducing the opposition to move into limited, narrower wide spaces to receive passes. Tackling a dribbler and easy interceptions are obvious victories, but so are forcing low percentage clearances, inducing dangerous passes, and preventing a calculated build-up. The more chaotic the opponent is forced to play, the more the pressing team benefits.

The Red Bulls’ line of engagement has been slowly moving backward since Jesse Marsch left the club in 2018. Even since Chris Armas was replaced by Bradley Carnell the side regularly begins to press mere yards in front of the centerline, when it is largely too late to create turnovers directly leading to scoring opportunities. Struber’s press by contrast is as high up the field as can be, with the strikers constantly engaging with the center backs, attempting to force passes to the opposition fullbacks. The midfielders prevent passes to the center of the field, and the pressing fullbacks move forward to stop the ball from advancing down the sideline. The entire formation gradually pushes toward the ball, tightens, and then snaps like a bear trap. Like clockwork, when one player moves in a certain direction, several others move to fill the space and prevent easy forward progress.

A return to the high line will ask a lot of the strikers and the attacking midfielder with regards to fitness level, the mental resolve to continue pressing, the ability to recognize the opponent’s passing lanes, and the precision to convert turnovers into goals. The responsibilities will increase at every position, which leads to questioning of the current squad’s ability to perform in this system. It’s asking a lot of any player, which is why so few are suited to the Red Bull tactics and talent recruitment requires a worldwide scope.

If the press is beaten without a resulting fastbreak, Struber’s side drops “quite deep into the defensive third” and “keeps the distance between the lines narrow” almost forming its own bunker. The team stays compact but continues to look for traps, defending ferociously and accumulating the expected level of fouls and cautions for a pressing team. Barnsley had a tendency to accumulate around the action, sometimes leaving only the weak-side fullback to defend against crosses. It’s one of many understood drawbacks to the system.

The weaknesses of the press are well-known. The entire team is involved, with most players concentrated in one quarter of the field leaving the center backs on an island. The press will be beaten, whether by long balls, perfect field switches, quick restarts before the team can be set, solo dribbling efforts, or a simple mistake from tired minds and legs such as over-pursuit that opens up an easy passing lane. Several times per match, the first two lines are surpassed, leading to counter-attacks requiring extinguishment from impressive defensive play. Sometimes the back line will head away a long ball, but the defensive midfielder was too slow to recover, giving the opponent a second chance to attack. It’s expected that the center backs and goalkeeper are capable of putting out fires and operating without help, dispensing perfectly timed tackles and performing superlative saves on breakaways. It may seem unfair, but the Red Bulls are paying a significant sum of money to the back line, so above average performance is demanded and expected.

“The responsibilities will increase at every position, which leads to questioning of the current squad’s ability to perform in this system”

There is also the issue of the bunker, something no Red Bulls manager has been able to overcome. Barnsley often struggled against teams that made no stab at possession, playing over traps and causing defenders to constantly scramble and engage in physical battles. Struber’s attempt to defeat this strategy was the failed acquisition of more physical players who would theoretically “hold balls and bring advantages in set-piece situations” while also changing the tenor of matches in which his club was being thoroughly outplayed and unable to gain a foothold. Additionally, he encouraged his players, notably the aforementioned Cauley Woodrow, to shoot from distance to draw out opposing defenders.

Another potentially interesting tactical issue was observed by Total Football Analysis relating to throw-ins, notably Barnsley’s inability to defend them despite not being an issue at Wolfsberger. The team failed to allocate enough players to cover the opponent, frequently resulting in the thrower receiving a return pass, disorienting the order of the press, leading to several goals. However, this was likely an adjustment issue because, according to Spielverlagerung, throw-ins became “an important part of [Barnsley’s] game” to force opponents backward and created “pressing opportunities.” It’s one of many things the Red Bulls might not pick up at first, but the precedent is there for an eventual fix.

As it stands, the team could use an upgrade to the press. Struber is going to demand a lot from his players, but twice he’s uplifted squads to unthought of heights in record time. The Red Bulls’ many struggles are well known, whether it’s the inability to tackle a random opponent making a slaloming run that pulls the entire formation out of shape or a simple loss of focus after losing the ball. The press will always be susceptible to certain opponents and occasional failure is built into the system. The way to overcome these issues is not to overcompensate with a lessening of intensity and hide away from the core identity, but to double down and press so energetically and in a disciplined manner that it overcomes the occasional failings.

Join us tomorrow as we discuss how Struber likes his teams to attack once they win the ball.