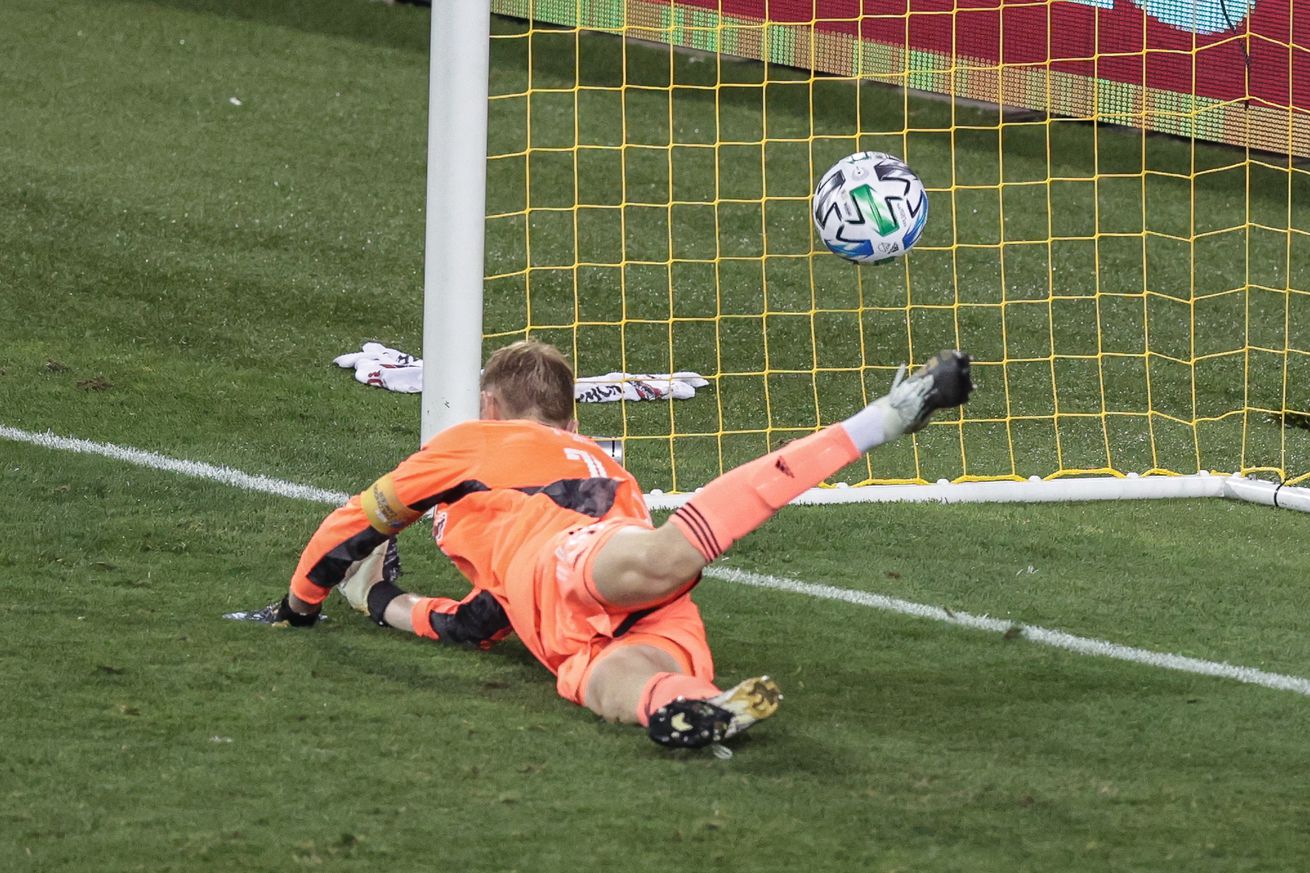 Ryan Meara deflected the ball into his own net. | Vincent Carchietta-USA TODAY Sports

Despite outshooting and outpossessing an injury-hampered D.C. United team, the New York Red Bulls continued their stuttering return to MLS play with a 1-0 loss Wednesday night.

In the sixth minute of second-half stoppage time, Estonian striker Erik Sorga had the ball just outside the top of the Red Bulls area and ripped a shot that deflected off of Ryan Meara’s arms and into the back of the net.

Meara complained to the referee Nima Saghafi that two DC United attackers were in an offside position or blocked his line of sight. He went to chat with his assistant and VAR, but both said it was a good goal.

“Yeah, the ball is bouncing around, fell to their guy at the top of the box, he gets a nice shot, took a deflection and came through a lot of traffic. I was complaining that there were two guys offside right in front of me, but I guess the ref saw it differently. “ Said Meara

Again Ben Olsen found a way to get a goal very late in the game as he set up his team to defend for 90 minutes, with the tried and trusted way to beat the Red Bulls press of sitting deep in defense.

But the Red Bulls had their chances to capitalize if not for Chris Seitz in goal. Tom Barlow had several looks in the first half, but was stopped each time by Chris Seitz or the post. Then in the second half, a beautiful ball was delivered to Matthias Jorgensen as he barreled towards the net, but at the last moment, his pocket got picked by the defender.

“It is frustrating for sure. Instead of talking about D.C., I think we need to talk about ourselves first. The positive on the night is that we created good looks on goal, we had some big chances and I think this is part of our growth as a team.” said Sean Davis, “Especially in MLS, when you are playing a desperate team and you let them hang in the game, anything can happen. We just have to continue to grow, continue to capitalize on our chances because that is ultimately going to help us control the game.

“A lot of lessons to learn tonight and its certainly frustrating being at home. We played well for the most part, but again, it comes down to making plays. You let them hang around and they end up finding their chance at the end of the game. Now more than ever, we have to stick together. “

But no matter what, the positive or the negative results fall onto the shoulders of Chris Armas, who made a strong comment that the philosophy of the Red Bulls will remain the same.

“Look, who we are will not change. We’re a team that can all-out press, we can defend in a midblock, and you see that teams either bypass it, hit long balls, hit big diagonals like in New England or sit back like Cincinnati and even D.C. tonight, sit back and look to counter. We understand now that it’s pretty straightforward. We’re going to see how good we can become at playing against a low block and unlocking back lines, and then dealing with transitions and set pieces.” said Armas

But now a seven-game unbeaten streak at Red Bull Arena has ended, and the team must recover and avoid tumbling deeper down the Eastern Conference standings Sunday against the Philadelphia Union.