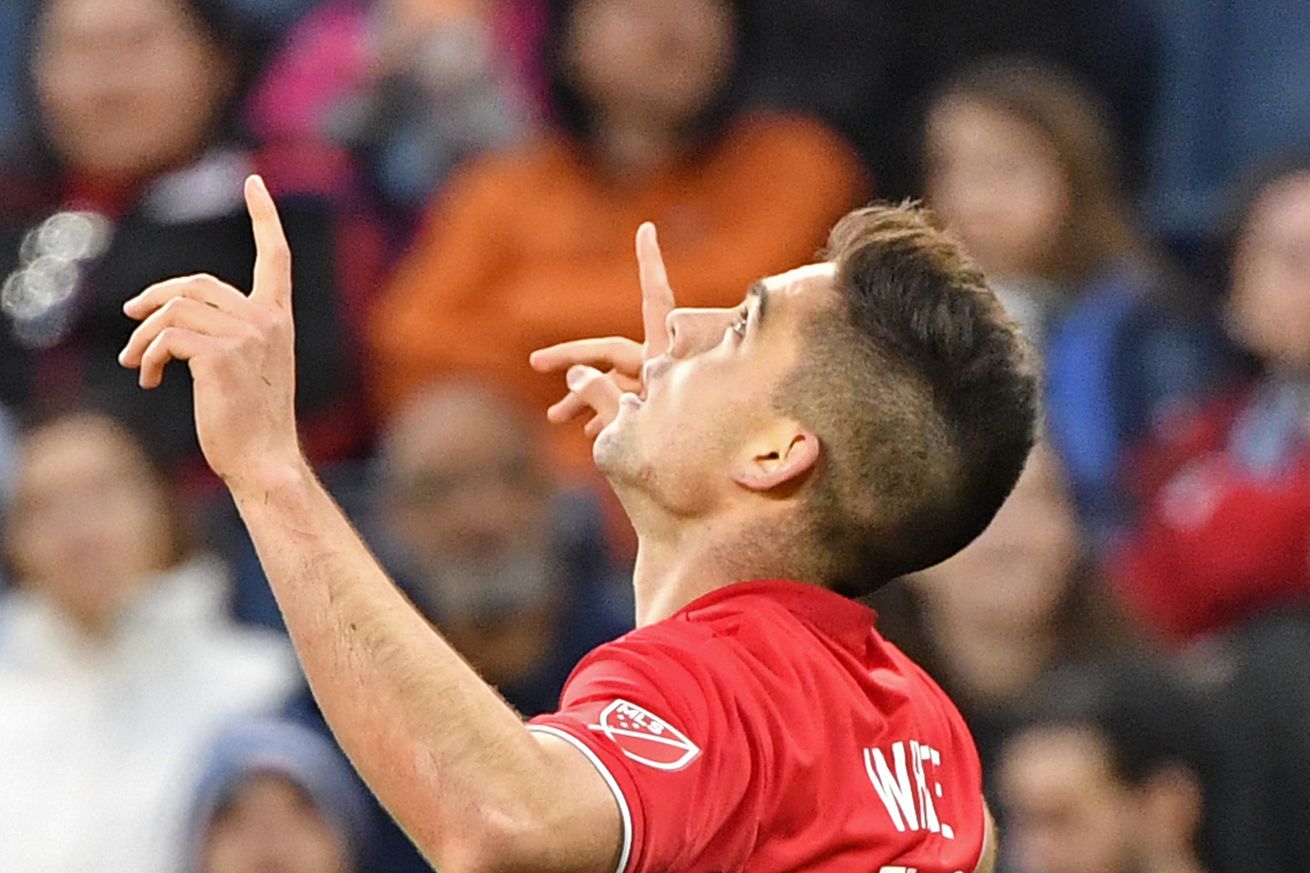 A hard fought two goal draw for the Red Bulls, but they lose Kaku on a straight red card

The New York Red Bulls needed to break this three match losing streak in the worst way, while they were taking on an opponent who was just two days off from their elimination from the CONCACAF Champions League, they were still a tough side to crack at home.

So after ninety minutes of hard fought action the Red Bulls were able to get a two goal draw out of Children’s mercy Park and take a point from Sporting Kansas City, but sadly it would cost them a player as Kaku was shown a red card for his frustrations in second half stoppage time.

After Giancarlo Busio leveled the score in the 88th minute and the 4th official posted three minutes of stoppage time, the Red Bulls were able to defend a potential attack inside their area. Then they tried to send the ball up the field, but it was deflected out over the far side touch line.

That’s when Kaku got angry and frustrated, as he wanted the ball to be played quickly to him to make an attack. He saw a loose ball and decided to kick it against the electronic ad boards, instead he stuck a fan in the front row.

Then pushing and shoving began and ended, as Referee Robert Sibiga showed Kaku a straight red card and sent him off. Not only will Kaku be suspended for the next match at the New England Revolution, but I expect him to be heavily fined as well as a possible addition match suspension or two.

“I didn’t see it. I was with our guys over there seeing the fan that got hit with the ball.” said Chris Armas “It’s good to see our guys go over there and just apologize on our behalf. I was there with them.

“Listen, I think we’ve got to make good decisions. I think Kaku was hoping for a different pass. He’s apologized to the team and to the fan, as well. I think he’s just frustrated and trying to smash it into the signage. You’ve got to be careful. We hope that the gentleman is okay. We apologize. We’re sorry that happened.”

After a johnny Russell goal in the 24th minute put the visitors behind the eight ball again, the Red Bulls started to slowly regain their confidence, but at the same time it was Captain Luis Robles who kept the squad afloat.

But once the second half began, the Red Bulls started to show what has made them a good team in this league. They would equalize in the 52nd minute as Cristian Casserers Jr. sent a long looping ball towards Daniel Royer, who stayed onside as the ball was played towards him.

Royer collected it, made a move to get away from Tim Melia, and slipped it inside an open net to level the score at one a piece. Daniel Royer scored his second goal in the league and his fifth in all competitions.

“I think it was to come back into the game. I think it gave us an extra push to even maybe win the game. It was a great ball from Cristian (Casseres Jr.). I wasn’t sure if I was offside or not, so I had to wait a little bit. I just tried to keep my composure and try to score.” said Daniel Royer

Head Coach Chris Armas made a bold move to sub out Bradley Wright-Phillips for Brian White in the 72nd Minute, but because of that bold move, the Red Bulls were able to take the lead three minutes later.

When Kaku shows his brilliance with the ball, he can do many things. One of those many things was to deliver a pin point cross to the attacker and convert the chance. He did that attacking down the far side, and when he crossed it right to White, it was a diving header that beat Melia for the one goal lead.

“Kaku got the ball out wide and Chris [Armas] told me to split the center backs so I picked up that position. We made eye contact, he played the ball in and I just tried to get my head on it.” said Brian White

But it would be the 16 year old Gianluca Busio who at the age of 16 came on the field as a substitute and converted in his third straight league match to level the score in the 88th minute. But what are the thoughts of Chris Armas after a match like this.

“We thought Kansas City would put a lot into it early on and we thought, maybe if they went with their starters again, they would fade a little bit. We felt it was two different halves for us.” said Armas “We were a little bit late to plays. Some of our pressing and some of our defensive posture in the first half we let get away from us. Kansas City is good at what they do. No matter what we do, with and without the ball, we remain aggressive.

“No matter what structure we play. When we’re aggressive, things look so different for us. At halftime, we made an adjustment to release our outside midfielders and outside backs in more of an all out press, which we thought caught them by surprise and certainly helped us be more like us.”

While it is two points dropped, the truth is any form of points in this match was going to be a positive the Red Bulls needed. While it is a four match winless streak, this could be the spark to get the club back on track, now they need to get ready for a road trip to New England, but without Kaku