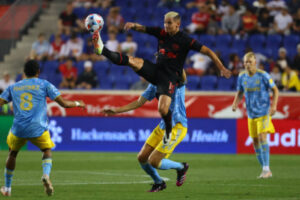 PREVIEW – New York Red Bulls face a disappointing and free falling Inter Miami Saturday night. New York are looking to shake off the disappointment of the 1-1 draw against Philadelphia Union last Friday. The dropped points after seeing their opponents go down a man for the majority of that second half left a bad taste in their mouths, but they host a team desperate for any sort of momentum.

It’s just the third all-time meeting between New York and Inter Miami, with each side victorious at the other sides’ home ground. However, there’s not as much shine on this match as previous two. One team is a pleasant surprise, while the other is also a surprise of a much worse kind.

Sitting tied for sixth, New York have navigated a tough beginning to the season to find themselves in a playoff spot. Gerhard Struber deserves major credit for getting steady results despite no offseason, injuries and plugging in new signings. The duo of Fabio and Patryk Klimala have been fun and fearsome. The former is second in the league with six assists, while Klimala has scored or assisted in four of his last five games. Caden Clark has been sparkling and is close to full fitness.

And where do we begin with Inter Miami? A decent start was wiped away with a fall from a tall mountain. They’ve only won once since late April, and have two victories all season. The two victories are tied with FC Dallas, Vancouver and Toronto FC, with Dallas (11) and the Whitecaps (9) having more points and Miami tied with Toronto (8) for the fewest in the league. Moreover, only scored nine goals so far, ranking fewest in the league despite having the Higuain brothers and Rodolfo Pizzaro. All three mentioned came on as substitutes in the 1-0 defeat at Montreal – July 3rd. Yes, the game against New York will be their first in the last two weeks.

But there’s a bit of positive news for Phil Neville and company. Kieran Gibbs could be in line to make his debut for the club, adding much needed depth and experience at the back. Plus, out of the eight points gained thus far, seven have come away from home. So it’s important to kick on and start getting results in a hurry. This club has lost six of their last seven games, including their last five contests. However, Red Bull Arena is a tough place to win, and New York has outscored opponents nine-to-two in its last five games there.

What to expect of New York Red Bulls vs Inter Miami

If we are to believe what we’re seeing on the pitch, then New York should win. This is a team finding solid footing playing out the principles of their manager and getting solid performances out of most of its players. Their defense has done a nice job with Aaron Long out for the season. John Tolkin has essentially made the left-back spot his own and is one of the first names on the team sheet. Also, center back Sean Nealis has grown his game over the last season and is currently tied for third in MLS with 29 interceptions. Loan signing Tom Edwards has been utilized as the other center back and performed admirably. It’s part of the reason New York has won points four of their last five games. But there’s a feeling of the classic “trap game” against Inter Miami.

This is where Miami come in. Do they have enough to frustrate their opponents and get a draw? Only one team has won at RBA and it’s Sporting Kansas City during the opening week of the season. I mentioned “trap game” before, and the opposite of that can also happen too. This game can be a “get well” game with New York asserting themselves from the outset. Should that happen, then the Red Bulls will find themselves climbing up the Eastern Conference.