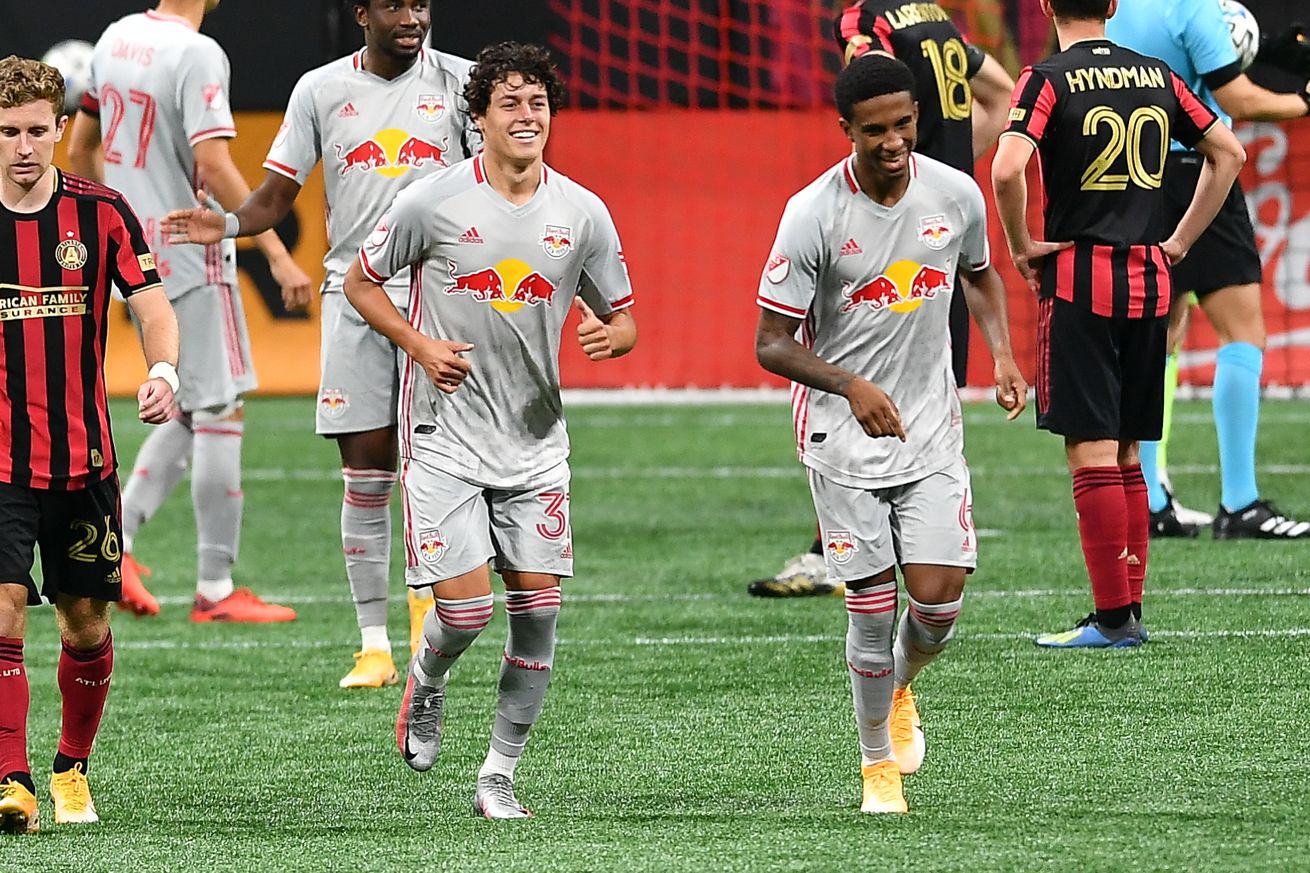 17-year-old gets his first contract, start, goal and win on the same day

On the same day that Caden Clark signed his MLS contract with the New York Red Bulls he got his first start and then scored the decisive goal as New York defeated Atlanta United 1-0 at Mercedes Benz Stadium.

In the 47th minute, the Red Bulls earned a corner along the near side. Captain Sean Davis delivered the ball into the middle of the area, which was cleared away but not, as the loose ball went to Clark, he whacked in volley that beat Brad Guzan clean and struck the back of the net. There were briefly some complaints that Daniel Royer was in an offside position, or he was obstructing Guzan’s view. VAR made the check and informed referee Jair Marrufo that it was a good goal and allowed it to stand.

“Yesterday I found out that I was in the [travel] squad, so I was really excited. The whole team and coaching staff gave me trust and confidence going into this game and that really helped me a lot.” said Clark. “The goal just fell right to me and was fortunate to hit it in the right spot. The team played great defensively, everyone worked hard and it was a great team win. Now we go again with training tomorrow.”

Interim manager Bradley Carnell was excited with both Clark’s debut and the team’s confident performance on the road.

“As I said to the boys in the locker room, just how we drew it up [laughs]. No, seriously, we know what a special talent he is, we’ve seen it throughout the USL.” said Carnell. “We know he has certain qualities and it makes it interesting with our style of play. First and foremost, he’s a Red Bull player. He’s a Red Bull philosophy player. Plays our way, runs our way, and is hungry in our way.”

“So yeah, sometimes these things happen this way. The first half it took him five, ten minutes to get into the groove of what now the MLS is all about, but then he found the groove, started picking up spots, started making passes, started making plays, and his confidence grew. We said to the group at halftime, set pieces could be our key tonight and yeah, it turned out that way.”

For Caden Clark he joins a list of young players who were called into the big club and made an impact while they were teenagers either as the MetroStars or the Red Bulls, with Eddie Gaven and Jozy Altidore as 16-year-olds, and Ben Mines when he was a 17-year-old against Portland two years ago.

“The loss last week, or a couple of days ago, really hurt the group. And I could sense, from the time we departed that parking lost against Miami, I could sense there was an urgency and an energy to get back to work.” said Carnell. “And I could just have a feeling, whoever played, you know we make a lot of changes tonight, and guys get comeback minutes in terms of Marc Rzatkowski, Sean Davis and Amro Tarek, we can go around the horn with guys getting their minutes and yeah, there was an energy in the group and you could tell something special was brewing tonight.”

“And then it’s picture-perfect, credit to Denis [Hamlett] and Kevin [Thelwell] to get the paperwork done in time for Caden Clark so, a really proud moment for him, a professional performance. It was a business trip for sure, because we knew, the last outing hurt us so bad, in our building, and we knew we had to bounce back. So yeah, proud of the boys, not too much time to celebrate this victory, but its massive for sure. It feels good right now but again, there’s a lot more work to do, it wasn’t perfect. Can we build a level of consistency, now.”