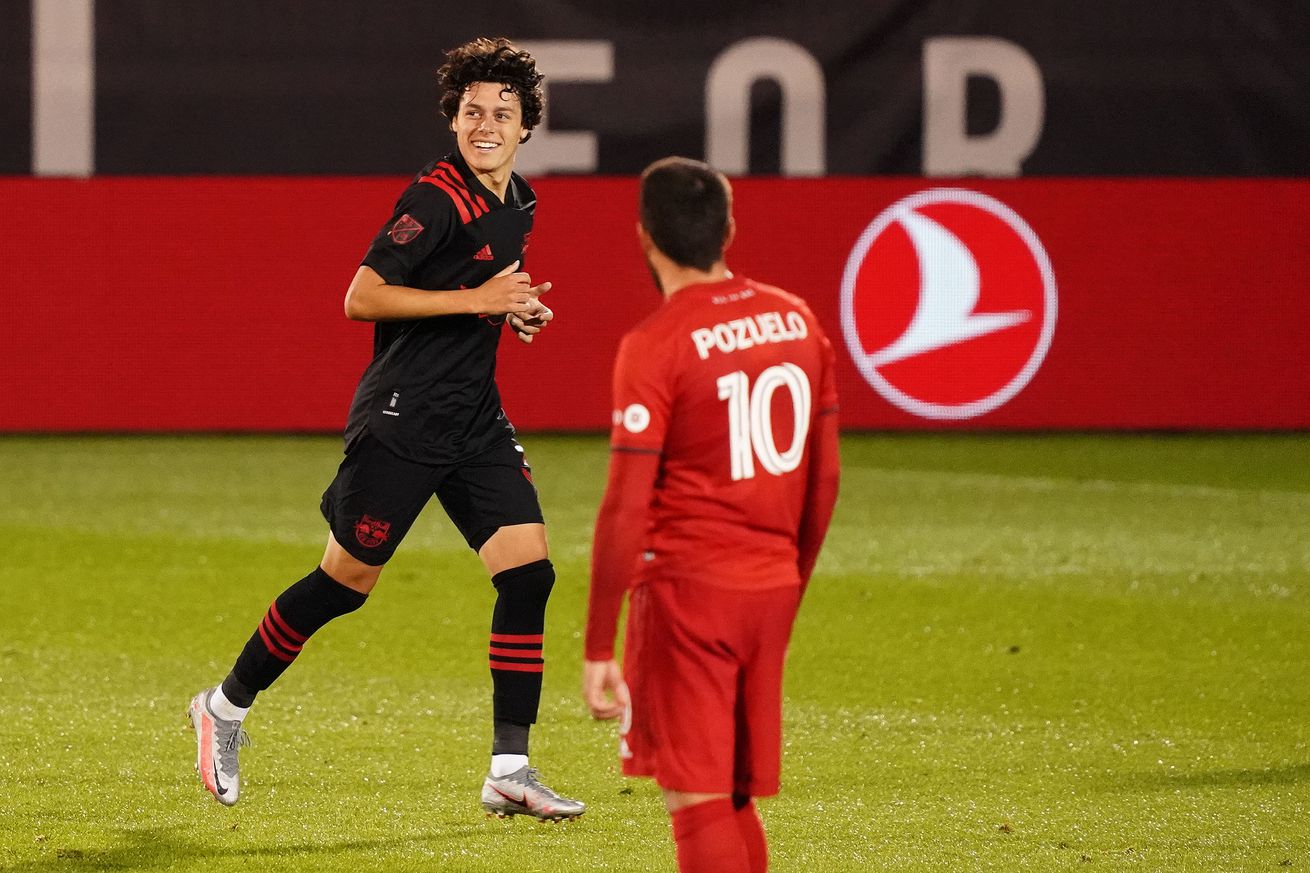 New York Red Bulls youngster Caden Clark came up big once again as he converted a spectacular equalizer against league leaders Toronto FC as the Red Bulls leave Rentschler Field in Hartford with a 1-1 draw.

The match was leveled at one a piece in the 77th minute as Clark cleanly received a ball from Marc Rzatkowski and turned, unleashing a powerful strike that left Toronto goalie Quentin Westberg with no chance. Daniel Royer placed his hands to his head in disbelief as Clark wheeled away in celebration.

“Yeah so, I found the space between the center backs and the sixes, and Marc played a great ball to me, and I had space to turn and my touch kind of beat the defender, and then he had to make a decision to foul me or not and he didn’t, so I saw the space, and, not watched the video, but saw it, and my mind was pretty set on hitting it once I got open. Yeah, everything was kind of set up for it so I think it wasn’t bad” said Clark.

But unfortunately the Red Bulls had already conceded on a penalty in the 23rd minute by Alejandro Pozuelo, when Dru Yearwood lifted his left arm and blocked the shot inside his own area. Pozuelo easily slotted past Ryan Meara on the penalty.

Outside of that moment the Red Bulls played a very strong match, with Yearwood sure he converted an equalizer in the 33rd minute, only to see it removed due to Tom Barlow being in an passive offside position that blocked the view of Quinten Westberg. But once again this was a strong performance as a whole that allowed the Red Bulls to steal a point.

Interim head coach Bradley Carnell was happy for Clark and the team for earning points away from home.

“I think I’ll start off by saying yeah, we come away on the road, against a very good team. We knew we had to get a lot right on the night and give the best version of ourselves. The first 25 minutes we were off the boil slightly” said Carnell. “We didn’t address the tactics, the approach that we wanted on the day, and after that all of a sudden things fall into place and we start getting our rhythm, start challenging the backline and start getting a couple of calm crosses in. Then we go down with the penalty, which is frustrating on a night when we don’t give up much, couple of half chances, but really not much.”

“At certain times during this game, when you get the chances that we did and we don’t take them, you know, against the best team in the league right now, yeah it’s always going to the dangerous. And then it’s a bit of a lottery, the last five minutes, it’s up and down and a little bit open.”

“Overall, a point of the road, if we said before the game, yeah we’ll take it, but during the progression of the game and how it went, I thought we could have got more out of it.”

Now it’s time to turn around and head back home, as the Red Bulls are preparing for a big matchup against high-flying Orlando City At Red Bull Arena on Sunday.