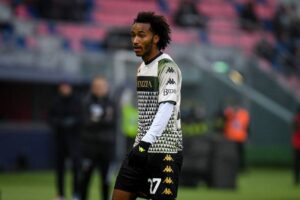 Welcome to my new column, Americans Abroad Weekly! Here we will be highlighting anywhere between three to five, maybe more, American players at the club level, doing their thing over each weekend. This will not be exclusive to out of the country American players. With the MLS Playoffs currently ongoing, if a major player in Gregg’s pool steps up for their MLS club, I will absolutely document it.

With all that being said, let’s kick things off, with Captain America himself.

Pulisic returned to action right before the USMNT November camp, from an injury that saw him miss just about two months. He scored the opening goal vs Mexico just five minutes after he came on the pitch, but this past weekend, he nabbed his first goal for Chelsea since returning to the blues rotation. He was subbed on in the 62nd minute, and scored his goal nine minutes later, sealing a 3-0 win away at King Power Stadium vs Leicester.

Another goal scorer for the USMNT vs Mexico, Weston McKennie got the start and played the full 90 minutes for Juventus in their win over Lazio on Saturday. McKennie was in blistering form going into the November camp, and in his first match coming out of it, was pretty solid as well. He had an 86% pass success percentage, and won 3 duels in what was a great team performance all around for Juventus. There have been rumors circulating about a possible purchase of McKennie by Antonio Conte and Tottenham Hotspur, but it seems Allegri and Juventus want to keep him.

Venezia has been somewhat of a revelation this season in the Serie A. The newly promoted side were not expected to be in top flight football much past this season, but here they are sitting at 14th in the table, and six points clear of the relegation zone. Without the addition of former Sporting Kansas City man, Gianluca Busio, Venezia may not be where they are now. Busio played 80 minutes against Bologna on Sunday, and grabbed an assist on the only goal of the night, which saw Venezia win 1-0 and grab all three points. Busio has a goal and two assists in 12 matches, but it’s what he does that doesn’t show up in the box score that has made him so valuable to Venezia.

Now Caden Clark isn’t technically in Europe yet, but he’s surely packing his suitcases and getting ready to join fellow American Tyler Adams and manager Jesse Marsch in Germany at RB Leipzig. Clark and the New York Red Bulls just barely squeezed into the MLS Playoff picture, and took a devastating first round loss to the Philadelphia Union in minute 124. Caden Clark came on in the 73rd minute and was subbed off in the 116th. Clark will head to Germany when the January window opens, and join Red Bull Leipzig. The German side sit in seventh in the Bundesliga, but are winless in the Champions League and seemingly will be knocked out in the group stage. American manager Jesse Marsch was off to a poor start for Leipzig, but has recently strung together some nice performances, and looks to have Leipzig back on track. At this rate, Caden Clark can only help.

So there we have it. There is going to be so much to talk about going forward for this golden generation of American talent, and hopefully I can help everyone keep up with the crazy amount of players we have in European competition all of a sudden.