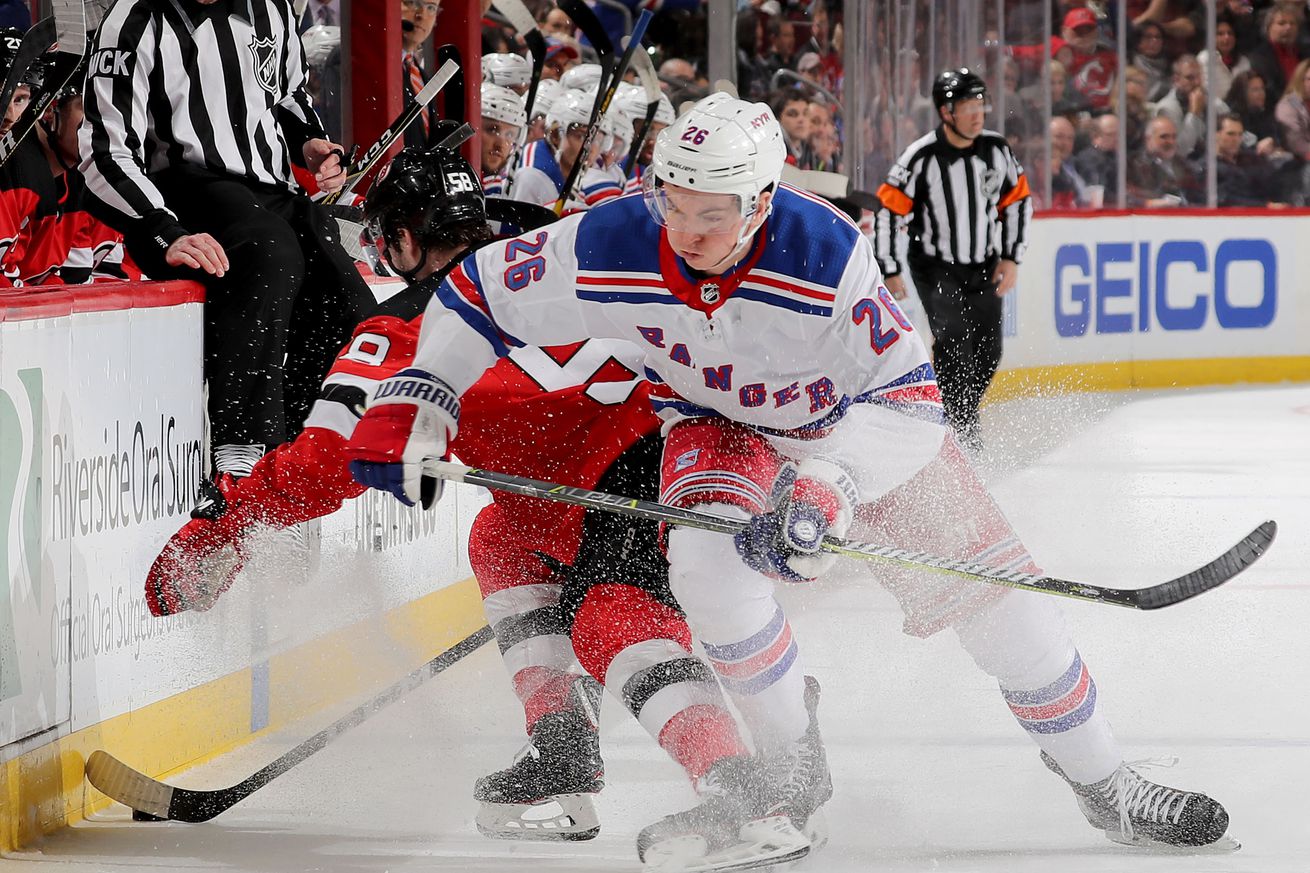 With just one year left before free agency, the Rangers have a decision to make on the 25-year-old this summer

A summer of change — both major and minor — awaits the New York Rangers, who now await it. The path to getting there is a long one, with an entire playoffs to watch to completion before June’s draft, but getting awarded the second overall selection in it has surely made the wait more bearable.

But even with the second overall pick, the organization, who finished the year with the sixth-worst record in the league, must ask themselves numerous questions, including what extensions, if any, to give to their free agents, and just how much of their $18 million-plus in available cap room to spend in free agency. There are also questions of which members of the 2018-19 team should skate in a Rangers’ sweater in 2019-20 — and that brings up a looming question regarding the future of 25-year-old Jimmy Vesey.

Praising the positive response of Pavel Buchnevich and Tony DeAngelo’s first years under David Quinn last week, Larry Brooks of the New York Post went on to question the likelihood that Vesey, who has one year remaining at $2.275 million against the cap, would even be back for a fourth year on Broadway.

”…then what to make of Jimmy Vesey, who recorded one point — a goal — over the last 19 games,” Brooks asked.

”Other, that is, than it is more likely the Harvard product will be somewhere else rather than in Tarrytown when training camp opens in September.”

Though Brooks’ remark was mostly passing and buried in a larger column, it shed light on an issue the Rangers will likely want to resolve as early as June’s Entry Draft, but surely prior to training camp next September.

Vesey, who many had pegged as the type of player likely to directly benefit from playing under Quinn’s coaching style, did see a marginal improvement in points (35) this past season but scored more than half (ten) of his 17 goals this season before the turn of the new year. In fact, since the shift to 2019, he thrice went without a goal in five or more straight games and went entirely scoreless through 31 of the Rangers’ 41 games played from January to the end of the year.

In spite of the lack of consistent scoring, however, Vesey is a hard-working player. Whether in a third- or fourth-line role, his game does have agitating qualities, and he’s never afraid to fight for loose pucks or battle for possession in the corners. He’s also shown a consistent willingness to drive to the net, which is borne out over 34 goals in his last 160 games. Not a bad scoring pace for a consistent bottom-six player.

A deeper dive into his possession numbers also paint gradual year-over-year improvement, particularly relative to the team, in Corsi For Percentage (-0.2) and Fenwick For Percentage (-1.7) — both of which he posted career highs in last season. While both were still in the red, they were markedly improved since his rookie season in which he posted a minus-3.9 and minus-4.4 in each category respectively.

Yet in totality, his numbers, though gradually improving, lack the rate of progress that would otherwise align with a long-term future in blue, which begs the question — just how soon should his tenure end, then? If the Rangers aren’t thinking about a multi-year extension now that would buy nothing but unrestricted years (at a premium), then why prolong the situation any longer than necessary? Especially since there are reinforcements on the way.

For Vesey, matters will only complicate if, as expected, New York adds an immediate NHL winger by selecting Finnish prospect winger Kaapo Kakko with the second overall pick. They’ll compound to the point of fracture should the Rangers also sign Artemi Panarin, and we’ve yet to even broach the fact that Vitali Kravtsov has reportedly reached an agreement on his entry-level contract.

Too many bodies, too few roster spots.

Should the New Jersey Devils — who won the right to the first overall pick — buck conventional draft consensus and select Kakko themselves, pressures might ease for Vesey given the odds the Rangers would race to the podium to call Jack Hughes’ name at the first chance.

Hughes, a center, wouldn’t pose the same direct threat as Kakko & co, wingers. This hypothetical scenario isn’t just unlikely, though — it encapsulates the long odds Vesey is facing to begin with.

As a player who was already looking at an uphill climb in what should be a highly-competitive training camp, the volume of incoming competitors alone could leapfrog Vesey (if they haven’t already) before he even has a chance to vie for his spot. Which is exactly why the Rangers would be wise to capitalize on his trade value now. Coming off back-to-back 17-goal seasons, it’s arguably never going to be higher.

While the league continues to trend heavily towards younger and younger rosters, there is generally no major shortage of teams looking for middle-to-bottom-six experience — something Vesey can breath easy knowing is still true. The Rangers no longer appear to be one of them, however. At least not for his particularly skill set. There’s simply too big a swell of rising talent on the horizon they’d be better off focusing on. Not to mention youngsters already with the team, like Brendan Lemieux, who New York surely wants to give every opportunity to make his mark on this team.

As the club continues this rebuild, perhaps now at an expedited pace given the potential inclusions of Kakko and Panarin, it’s important they focus on their long-term goals that will so heavily rely on the entry-level years of important would-be stars like Kakko. Those years are too important in repositioning New York as a playoff team en route to contender to waste time with stop gaps. Even well-liked ones.

While Vesey is an NHL player, he’s not one of the calibre that would justify his being placed in front of the wave of incoming prospects. Certainly not when his value to the market will likely outweigh the positives of keeping him around for numerous additional seasons as a veteran voice.

Ready or not, the future is now. Unfortunately for Vesey, his should be elsewhere, and the sooner the better. After all, there’s no need to waste his time, either.