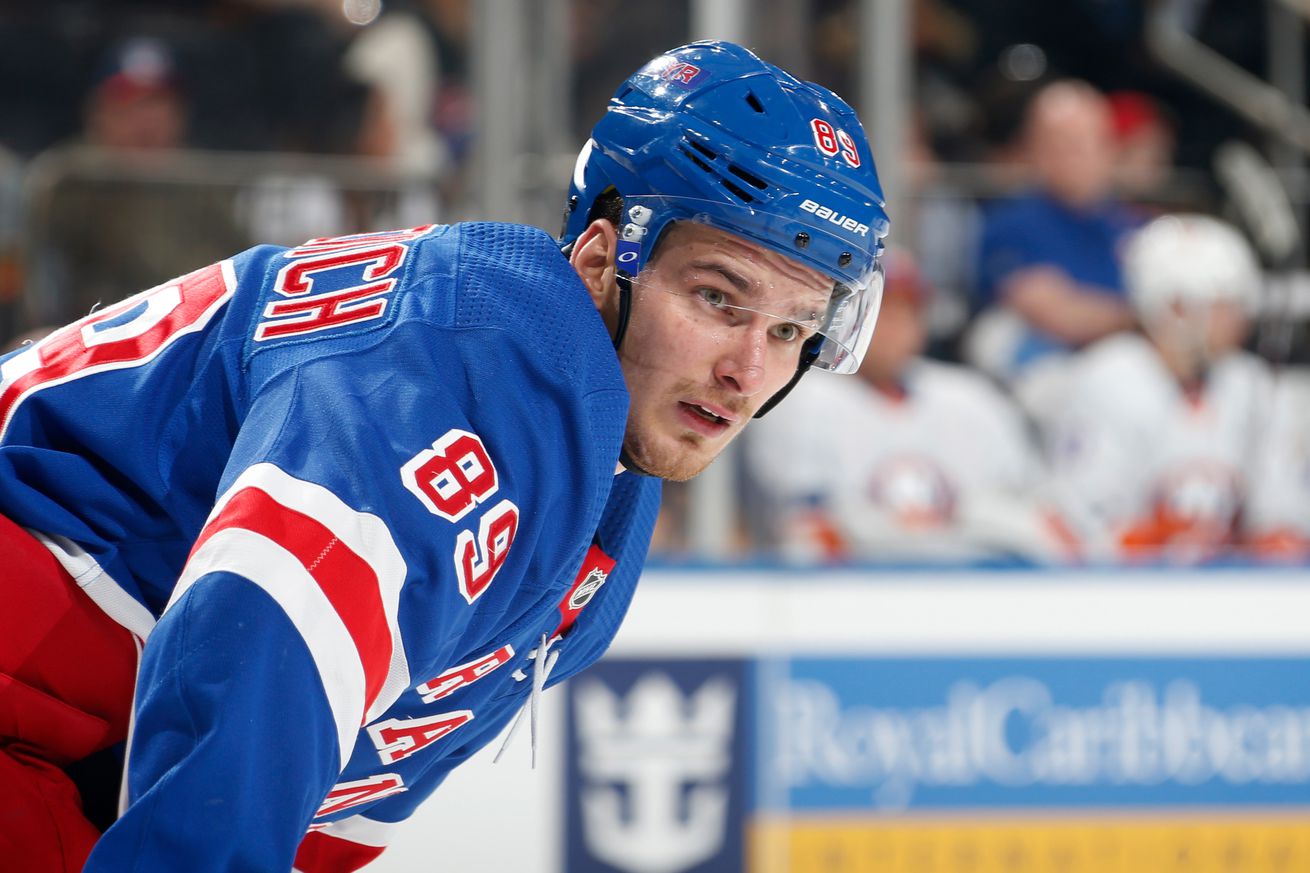 A trade could make sense at some point in time, but that time isn’t now.

Since free agency opened, the New York Rangers have been fairly quiet. There are areas to address and salary concerns, which could lead to player movement before next season begins. To remedy a weakness, management may have to pull from an area where they’re building a surplus — the wings. Jeff Gorton spoke to that concept with the media in relation to the team’s decision of selecting Braden Schneider, but it could apply in other areas too. That could lead to Pavel Buchnevich going on the trading block, which is something Adam Herman wrote about earlier this offseason.

While trading Buchnevich could help the Rangers address their defensive depth or strengthen down the middle, he’s become a valuable piece in New York. Moving on from the winger at this point seems counterintuitive as the Rangers continue their rebuild, and there’s reasons why he should be a long-term fit.

At a base level, Buchnevich has improved every season he’s been in the league. His points per game has increased from .49 to .58 to .59 to .68 this past season. Looking a little deeper in terms of Evolving-Hockey’s Goals Above Replacement, Buchnevich had a hot start in just 41 games played posting a 6.8 in his rookie season. Year two saw him post 3.3, Year three improved to 3.8, and this past season was his best to date with 13.4 goals above replacement.

The biggest reason for Buchnevich’s gains have been the improvements he’s made playing defense, as in years past negative marks have brought down his overall total. This year he posted a 0.8 in defensive impact under Evolving-Hockey’s model, a vast improvement over the -3.2 he posted the year prior.

The takeaway here is that Buchnevich has always been a positive offensively 5v5, but this year he was able to increase his impact offensively without making sacrifices defensively.

A popular theory that’s used when evaluating Buchnevich, particularly his breakout this season, is that he’s simply a passenger on the KZB line that includes Chris Kreider and Mika Zibanejad. This wasn’t the case, and actually, both Kreider and Zibanejad’s actual output exceeded expectations this year suggesting there could be some regression next season.

Here both Kreider and Zibanejad had a favorable actual goals differential per 60, but were negative relative to their team in expected goals. Buchnevich was 0.28 better relative to his teammates while also being 0.60 better in expected goals. In terms of possession, he was clear and away better at driving play than his linemates with a +8.13 mark per 60.

And for good measure here is how each player fared at a base level.

Once again these numbers are similar to that of the relative ones with Kreider and Zibanejad exceeding their output in actual goals for as opposed to expected goals, with Buchnevich being the best in terms of percentage for in all but actual goals.

Buchnevich is certainly an interesting player, and one who is a lightning rod for the fanbase. People don’t like that he’s an emotional player who wears his emotions on his sleeve, and also feel that he’s soft which really isn’t true at all.

Personal opinions of Buchnevich aside, it is hard to not look at his career to date as a success. He was selected 75th overall at the 2013 draft, and is 15th in scoring from that draft class. The Rangers are up against the cap this season, but going forward money will open up, some of which should definitely go to Buchnevich.

He’s also had more of an impact to start his career than Kreider, something most fans don’t realize.

Using % of cap, Buchnevich would be within rights to ask for $5.25M plus. https://t.co/QwxIxQInjN

The advanced stats for that same range are as follows:

The major difference here is Kreider was on a stronger team, including one that went to the Stanley Cup Final, so the circumstances in which each player produced aren’t exactly comparable in terms of possession.

So why is Buchnevich an important piece moving forward?

One way the team could adjust, without hurting the overall depth, could be reworking the top six by pairing Zibanejad with Artemiy Panarin which would make way for the reuniting of KCB line which includes Kreider, Filip Chytil and Buchnevich.

According to Money Puck, the line was the Rangers’ most effective with a 62.9 xG% which breaks out to an xGF of 3 per 60 and an xGA of 1.77 per 60. It is important to note that the line was together for only 112 minutes, but there’s reason to believe it should be tried again next season given how well Chytil played.

Here Chytil’s expected WAR rose, as did his his expect goals above replacement. The No. 21 pick from the 2017 draft has started showing signs of being more comfortable, and he deserves a chance to run a line in the top six.

Last season the Rangers’ second best line was Panarin, Ryan Strome, and Jesper Fast, but that line won’t be together as a result of Fast joining the Carolina Hurricanes. Strome is scheduled to go to arbitration, but with him a year away from unrestricted free agency it would make sense to pretend as if he’s not in the team’s future plans and therefore use him as a third-line center if he’s retained.

Kakko on a line with Zibanejad and Panarin would be very beneficial, as he’d get a lot of space on the ice by virtue of the defense paying less attention to him than his linemates. That would mean a top six of Panarin, Zibanejad, and Kaapo Kakko as one line, with Kreider, Chytil, and Buchnevich as the other.

In this hypothetical Alexis Lafrenière finds himself on the third line to start his NHL career, which is fair from the get go. His potential is clear, and if all goes well he’ll become a top-six mainstay in the next two seasons, but for now line three could be the way to go. In an ideal world he’d be paired with a more responsible center than Strome, and have a wing partner with more experience than Julien Gauthier.

All of this said, if you remove Buchnevich from the picture, odds are the team is a lot worse because he’s so impactful at even strength. There’s also less insurance in case one of their younger players, Kakko or Lafrenière, struggles. As it stands, Buchnevich is the team’s best right wing, and the only one who has shown he can play at the NHL level. Kakko, while very talented and full of promise, had a rough rookie season. This is not to say he’s not going to be a very good NHL player, but at this point isn’t. Fast went to Carolina, Gauthier has minimal experience, and Vitali Kravtsov (someone who many feel will make Buchnevich expendable) is in the KHL.

But what about their center depth?

The Rangers do need to really assess their play down the middle, and the team may be able to add a center who replaces Strome, but maybe that doesn’t need to happen at this very moment. At this point, isn’t it better to see what Chytil is capable of, especially with Zibanejad two years away from free agency?

There’s no guarantee that Zibanejad is re-signed, the rumored pursuit of Jack Eichel may hint at that, and even if he does ultimately come back it is unlikely that he’d be the No. 1 center for the entirety of his new deal. If the Rangers’ cant trade Strome, the play could be rolling a 1-2-3 of Zibanejad, Chytil, Strome, and then signing a right wing with some NHL experience who is defensively responsible to protect Lafrenière on the third line.

Center depth isn’t the only area of weakness. The defense also needs work, which could force the team to trade an asset like Buchnevich. That’s where Tony DeAngelo could come in as a trade chip. There’s no guarantee it happens, but it would be fair to assume that the Rangers would want to move one of Strome or DeAngelo given the raises they are due, and in terms of maximizing value it might be easier to do a RHD for LHD swap. Maybe there’s a deal to be made that sends DeAngelo+ back to Arizona for 22-year-old Jakob Chychrun who is already locked in at $4.6 million for the next five years. Just one hypothetical, don’t tie me to it.

It has also been suggested, by Jeff Gorton, that one of DeAngelo or Adam Fox could be moved to the left side, and that would open up a spot on the right side. But again, financially that is only kicking the can down the road.

Buchnevich’s next contract looming may result in a trade going down at some point. There’s only so much cap space to go around, and another strong season could increase the cost for the winger even more. But rather than moving him before that happens, it’s worth trying to re-sign him sooner. The season starting later than usual means that he could potentially ink a new deal prior to play starting.

He loves the team, is close pals with Igor Shesterkin and Artemiy Panarin, two pretty important players for the future of the franchise, so it is possible he’d be open to taking a short-term deal. It would also give him a chance to hit the market once the NHL economy has hopefully rebounded as a result of things in the real world improving, and by that point the Rangers would also have a better idea on the trajectories of Kakko, Kravtsov and Gauthier.

As it stands, the Rangers haven’t improved too much in the short-term. The solution may be to move roster players in an area of strength to fix those weaknesses. While that may be a sound strategy, it doesn’t mean Buchnevich should be on the trading block — at least not yet.