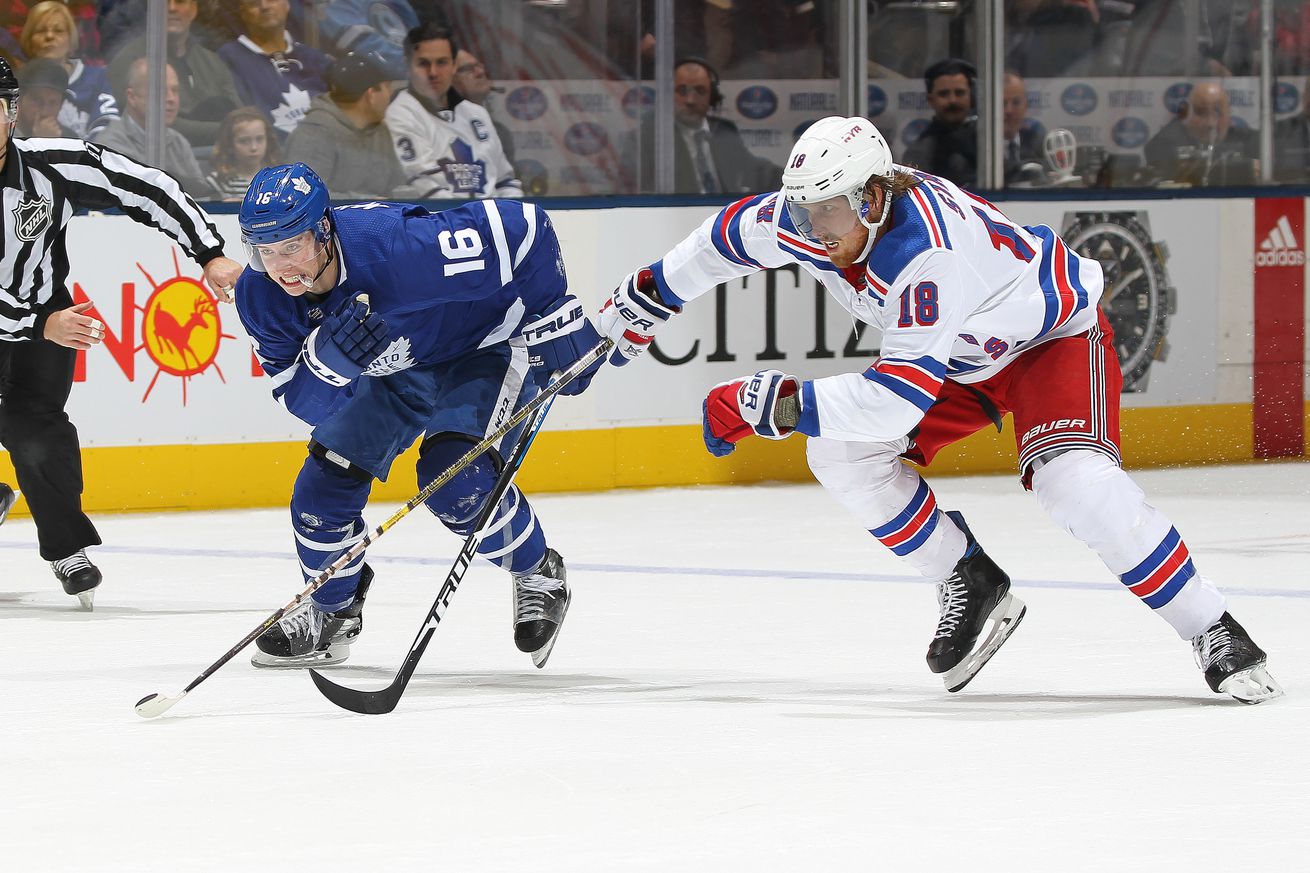 The last few days have been euphoric around Rangerstown with the uttering of the name Kaapo Kakko getting the cheap kind of pop that I’d liken to Mick Foley playing up to the crowd how good it was to be back in whatever city the WWE happened to be in for that particular show. And there’s good reason to be giddy, because whether it is Kakko or Jack Hughes; the Rangers’ forward situation will improve upon either joining the organization.

If Artemi Panarin decides to take his talents to Broadway instead of Sunrise to join Coach Q, things could look even better. But all of these additions would be for naught if Jeff Gorton doesn’t address the team’s defense, and that is something that has to be a top priority this summer.

In the next three years there’s a good chance the Rangers’ defense involves if not all, at least some of a group that includes K’Andre Miller, Nils Lundkvist, Yegor Rykov, and Tarmo Reunanen. If the tea leaves are to be believed, you can also throw Adam Fox into the mix.

While there’s ranging potential among those prospective rear guards, the Rangers still need to start addressing the defense now. They need to have quality NHL defenders on the roster by the time the reinforcements arrive, as this will allow them to acclimate to the pro game in a slow and steady fashion. Put bluntly in the lexicon of Mike Francesa; “they need a numbah one.”

The current roster lacks someone with that pedigree, and that’s been true since Ryan McDonagh left. Among those who are on the current roster, Brady Skjei and Tony DeAngelo have the most promise to be a factor in the rebuild. It is my hope that Skjei can build on the success he showed later on in the season, because I don’t want to have to dunk on myself again like I did with Mika Zibanejad.

Fredrik Claesson is a solid defender who should be part of the team next year, but it wouldn’t surprise me if the team didn’t qualify him as an RFA. Libor Hajek looked fine in his limited trial before injury, and he’s someone who is bound to get another look next year.

We have a general idea of what Neal Pionk’s limitations are, and his underlying numbers suggest that he is only deserving of a one-year contract at most. Among the roster regulars, Pionk had the fifth-worst CF% at 44.20, and the sixth-worst xGF% at 45.04. His shortcomings became more apparent once he stopped contributing offensively, and it didn’t help that DeAngelo finished with 30 points despite playing in just 61 games.

Kevin Shattenkirk is a veteran with two years at $6.65 million left on his deal, and it is in the Rangers’ best interest to give him every opportunity to increase his value to the team. He ended the year with 28 points in 73 games, and was first among mainstay defenders in CF% (49.59) and xGF% (50.75).

Then there’s Brendan Smith who was utilized as a winger and defender, which makes analyzing his play just as difficult as forecasting his future. Smith played better this year than he did the year prior, but the bar was very low and he was still one of the most-scratched players on the club. Among the team’s regular defenders Smith finished second in CF% (48.08) and third in xGF (47.79). I think he can still bring some value to the team, but if push came to shove, I’d explore a trade with 50 percent of his salary retained.

The simplest way to improve the defense is addition by subtraction, and we have enough data to suggest that Marc Staal — not Shattenkirk as suggested by some — would be a good candidate for a buyout.

This is the current contractual state of the Rangers’ defense, and if they want to bring someone in; someone has to move out.

I don’t know if the Rangers will make the tough decision similar to how they did with Dan Girardi, but if he is to remain with the team it needs to be on the third pair in a sheltered role. Staal was second in total ice time this season with 1260:25 at 5v5, and had a team worst CF% of 43.03 and xGF% of 44.93, according to Natural Stat Trick. This type of performance can be mitigated with usage, but in an ideal world the Rangers’ defense would be free of him next season.

In terms of who the Rangers should go after, it would make sense to find someone to be an anchor on the right side based on the fact that the prospect pipeline is chock-full of lefties.

Jacob Trouba seems like the obvious choice, and he’s a name that has been talked about for quite some time. Trouba, represented by Kurt Overhardt who also happens to be Jesper Fast’s agent, is an RFA who turned 25 in February, and is one year away from UFA status. He went to arbitration with the Jets last offseason, and was awarded $5.5 million.

As it stands, the Jets have $23.8 million, not including the expected cap increase, to sign Patrik Laine, Kyle Connor, and Trouba. Tyler Myers, Kevin Hayes, and Brandon Tanev are their top UFAs, and next summer Jack Roslovic and Sami Niku will be RFAs. This is a long way of saying that they are going to have to make a choice at some point on who they keep, and who they move out. They ultimately could let Myers walk away and just use some of that money to lock-up Trouba, but there are no guarantees.

From a timeline perspective Trouba could be a great fit in New York. He could slide into the No. 1 slot, and the Rangers could then rotate Shattenkirk and DeAngelo between the No. 2 and No. 3 slot. This scenario involves no Pionk, and I admit that may be a little unrealistic based on how much the Rangers may value him.

But using this hypothetical, if the Rangers ultimately walk away from Shattenkirk when his contract is up, or try and trade him in the last year of his deal, that would create an opening for Fox. It’s hard to put a price tag on Trouba in a trade, but it wouldn’t be surprising if the Jets asked for their 2019 first back, a prospect, and/or Chris Kreider. I don’t want to go down that road right now, but at some point the Rangers will need to look at their forward situation and assess who can be utilized as an asset to improve the defense.

We could run through plenty of hypothetical scenarios until the cows come home, but it is abundantly clear that something needs to change with the defense.

That includes coaching; there’s no reason why Lindy Ruff should be back next season.

We could get into the UFA market and Erik Karlsson, one of Henrik Lundqvist’s closest friends, Jake Gardiner perhaps, or a reunion with Anton Stralman, but with the offseason a few days old I can’t afford to burn all my #content in just one article.

The Rangers are still rebuilding, and the next steps should focus on creating an environment that will pave the way to being a contender. The 2020 Draft is going to be a deep one and it would be great if the Blueshirts were able to pluck a player from the top 10 or below, but this season highlighted that David Quinn’s team is going to compete to the very end.

If the Rangers’ forward group is set to improve, it only makes sense to address the defense too. Doing so will give the team another year to see what they have and what they still need, and push them closer to their ultimate goal of being a consistent playoff threat for years to come.