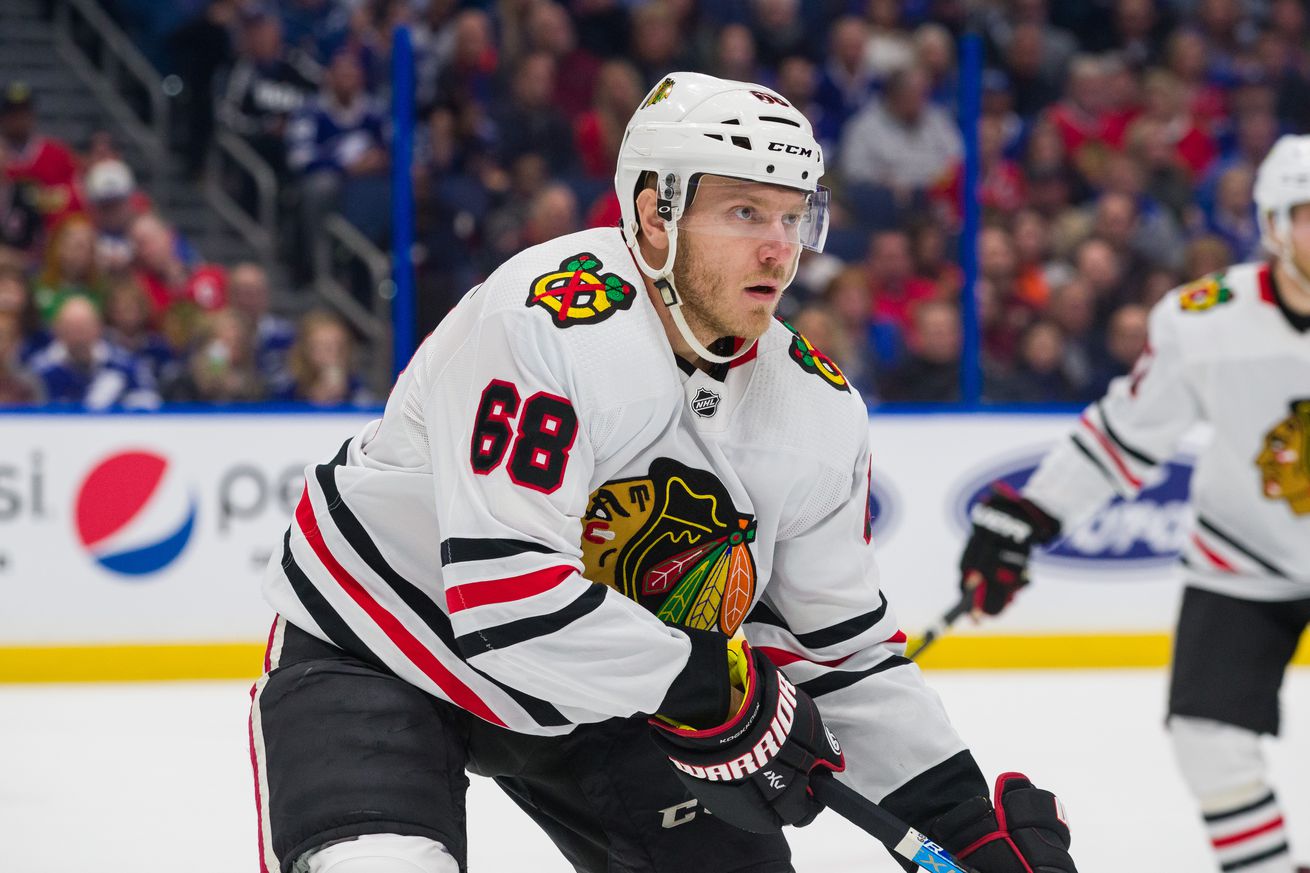 The Rangers defense needs work, but the left side needs a major makeover.

The first two entries of this series have focused on what the Rangers could do at center — whether it be weaponizing an offer sheet or taking a hybrid approach. Today we’re going to look at improving the defense, specifically the left side.

Stylistically, the Rangers generated a lot of offense at 5v5, but surrendered a lot as well. You should never complain about scoring goals, but they can afford to make some trade-offs so that they aren’t built in a way that they’ll crumble if the goals dry up.

All in all, the Rangers dynamic offense covered up a fair share of sins, but they need to improve defensively because there’s no guarantee the team will be as lucky up front next season. Shayna Goldman had a great story in The Athletic back in December which highlighted many of those defensive flaws, and I suggest you check it out.

As a baseline, here’s a look at the Rangers’ defense this season starting with goals for and against.

Third was Tony DeAngelo who cumulatively was 49 basis points better offensively, and 48 basis points better defensively. The list goes on, and if you were to look at one chart, the delta goals highlights how each defender either exceeded or underperformed relative to their expected output.

Next up is possession, and I will let the chart mostly speak for itself.

Here you can see that the majority of the Rangers were in the same ballpark in terms of events for and against, with the overall percentage being pretty minimal in difference with the exception of Libor Hajek.

Lastly is a chart named luck which takes into account 5v5 shooting percentage and save percentage for PDO. This is because there are variables that you can’t control for, so while there is certainly skill involved, luck plays a role.

Jacob Trouba was one of the unluckier defenders, whereas DeAngelo, Fox, and Lindgren had some luck on their side. The goal is to be as close to 100 as possible, although there will be exceptions for players who are really good shooters, and teams that have elite goaltending. It isn’t a perfect metric, but can add context and be useful in combination with the other metrics above.

If there were a TL/DR here: it would be that going into next season the team needs to keep an eye on Lindgren, Fox, and DeAngelo for potential regression backward, and for a bit of a resurgence for Trouba. In his case he struggled adjusting to a new team, and was shuffled around between partners in an attempt to see what fit. His most frequent partner, Brady Skjei, was traded, and his second most frequent partner, Libor Hajek, should start next season in Hartford.

The Rangers would benefit to shed one of, or both, Marc Staal and Brendan Smith’s contracts, which would allow for a proper rebuild of the left side that doesn’t totally hinge on prospects saving things.

Lastly, here’s a look at the Rangers most popular pairs last season, those who logged at least 200 or more minutes together 5v5.

That said, here are some ways the Rangers can upgrade the left side starting with RFAs.

Dunn is a name who has become pretty popular on Twitter in recent weeks, and his future could depend on how the team proceeds with Alex Pietrangelo. We presumably won’t know how things will go, but let us assume he will be available.

Dunn was deployed in a bevy of ways this season, and spent 322 minutes with Justin Faulk, 291 minutes with Robert Bortuzzo, 219 with Alex Pietrangelo, and 111 with Colton Parayako. The results were generally positive from a possession standpoint, but in terms of goals and expected goals, he had the most success with Pietrangelo.

If acquired, the Rangers could look to pair him with Jacob Trouba to help balance out the pair, but assigning him to Adam Fox could be interesting, as it would allow for the team to evaluate Ryan Lindgren and what he’s truly capable of without his mainstay partner. It remains to be seen long-term where Lindgren fits in, and eventually room may have to be made for both K’Andre Miller and Matthew Robertson.

Slater Koekkoek is an interesting name — no, not the alliteration of his last name, or the fact that his first name is ‘Slater’ — but rather him as a potential addition.

He’s someone I think Chicago would prefer to keep, because he posted some decent results in his first “full season” with the team. Koekkoek was the No. 10 pick of the 2012 draft, selected by Tampa, but never found his footing in the Sunshine state. He joined Chicago last year, and appeared in 22 games.

This season, in terms of shot attempts against, Koekkoek was Chicago’s best defender in limiting chances as he allowed 53.38 per 60. The same was true for expected goals against, as his rate of 2.37 per 60 was best among Chicago rearguards.

Here’s a visual look at his impact courtesy of Hockey Viz.

This season was Hutton’s first with the Los Angeles Kings after spending the last four with the Vancouver Canucks. He posted some strong results, and represents an amazing overall value at the right age and price point as the Rangers look to transition their team.

Overall, Hutton would give the Rangers some flexibility, and he’d be a decent upgrade over what they currently have on the left side.

This season Brodin will enter the final year of a six-year, $25 million deal signed with Minnesota in October of 2014, and would be an attractive option via trade. Minnesota has 17 players under contract for next season, and $16,200,578 to replace/re-sign Mikko Koivu, Alex Galchenyuk, Luke Kunin, Jordan Greenway, and Carson Soucy per Cap Friendly.

Bill Guerin is looking to be busy this offseason, and after losing to the Vancouver Canucks in the play-in round said that there “definitely have to be changes” The story, behind a paywall, mentions the need for a No. 1 center, and how the team could potentially make changes to the goaltending tandem, although Kaapo Kahkonen is waiting in the wings. Back to Brodin, he’s exactly what the Rangers need, which is a suppressor of offense against.

This season he posted a line which included a 54.5 GF%, a 49.71 CF%, and an xGF of 53.27. His goals against per 60 this year was 2.29, higher than his expected rate of 1.86. If the Rangers were to trade for Brodin, it would need to be a move where they know he can extend him. I don’t want to throw out hypotheticals, but fair to say the Rangers have the assets to get a deal done.

While you could consider Krug the most unrealistic of options, it would be wrong not to give him a mention, and outright dismiss the possibility of him joining the Rangers.

Krug has to be one of the league’s more underrated defenders in recent years, which isn’t surprising since the 5’9” defender has played in the literal and figurative shadow of Zdeno Chara. He was due for a mega payday before the pandemic struck, and in a flat cap environment his price tag could come within a range that is realistic for the Rangers if they were to cut salary elsewhere. But, I’d fully expect a team to offer him a Brinks truck, looking at Steve Yzerman in Detroit, and here’s why.

From a box score perspective, Krug finished the season with 49 points which was second among defenders, and fourth among all free agents. Over the last five seasons, Krug is sixth in total scoring among defenders (256 points in 363 games) and first in power play scoring with 126 points.

Krug in a sense offers the best of both worlds, and is a bit more offensive in nature although driving play helps suppress chances against, but would certainly be the most costly, and could be a roadblock to someone like Miller and Robertson down the line while occupying valuable cap space. I don’t expect him to be a top option, but he’s someone that makes you pause if the price is right.

Last up is TJ Brodie, a defender who still has name recognition around the NHL, and someone coming off a five-year deal that paid $4,650,400 a season. Offensively this was one of Brodie’s worse season in terms of raw points, as he finished with 19 points in 64 games (0.30 points per game), his lowest output since 2012-13.

The interest here would be if Brodie were looking to sign a short-term deal in order to try and boost his marketability, and a team like the Rangers would give him the chance to garner a lot of attention. He’d be a decent fit overall that can generate offense while posting solid defensive results, but isn’t someone worth giving big bucks and term.

At a bare minimum, the Rangers desperately need to add a top-four defender on the left side. Adding two would do wonders for this team. The above are just a few options worth considering, and each are in a different price range. If the Rangers were to go big in an attempt to upgrade their defense, ie: Torey Krug, it would mean moving someone making money, or someone due to make money. That applies to Ryan Strome, and DeAngelo, two players Joe wrote about on Tuesday.

There’s the potential for having a defense corps that includes Fox, Lindgren, DeAngelo, Trouba, an external acquisition, and someone like K’Andre Miller, but a lot would have to break right.

Specifically, that would include finding a way to move Smith’s contract, Staal’s too, and maybe getting an $8.5 million windfall if Henrik Lundqvist were to retire. I don’t expect many of those things to happen fortuitously, so the Rangers may have to get creative.

The Rangers need to take steps toward becoming a contender, and addressing the defense is critical. A model to look at is Carolina, as they’ve done a good job building a group that includes Jaccob Slavin, Brett Pesce, Dougie Hamilton, Jake Gardiner, and Haydn Fleury with prospects such as Joey Keane, Jake Bean, and Gustav Forsling in the system. They also have UFAs like Joel Edmundson, Trevor van Riemsdyuk, and Sami Vatanen, and this just speaks to the overall talent and depth they’ve had in the organization.

From a prospect perspective, left defense is an area of strength for the Rangers because of Miller, Matthew Robertson, Zac Jones, and to an extent Tarmo Reunanen, but not all of them are going to make an impact, let alone an impact next season.

Therefore, improvements will have to come from outside of the organization, because it is too big of a weakness to let it continue any longer.

Stats via Evolving-Hockey unless otherwise noted.