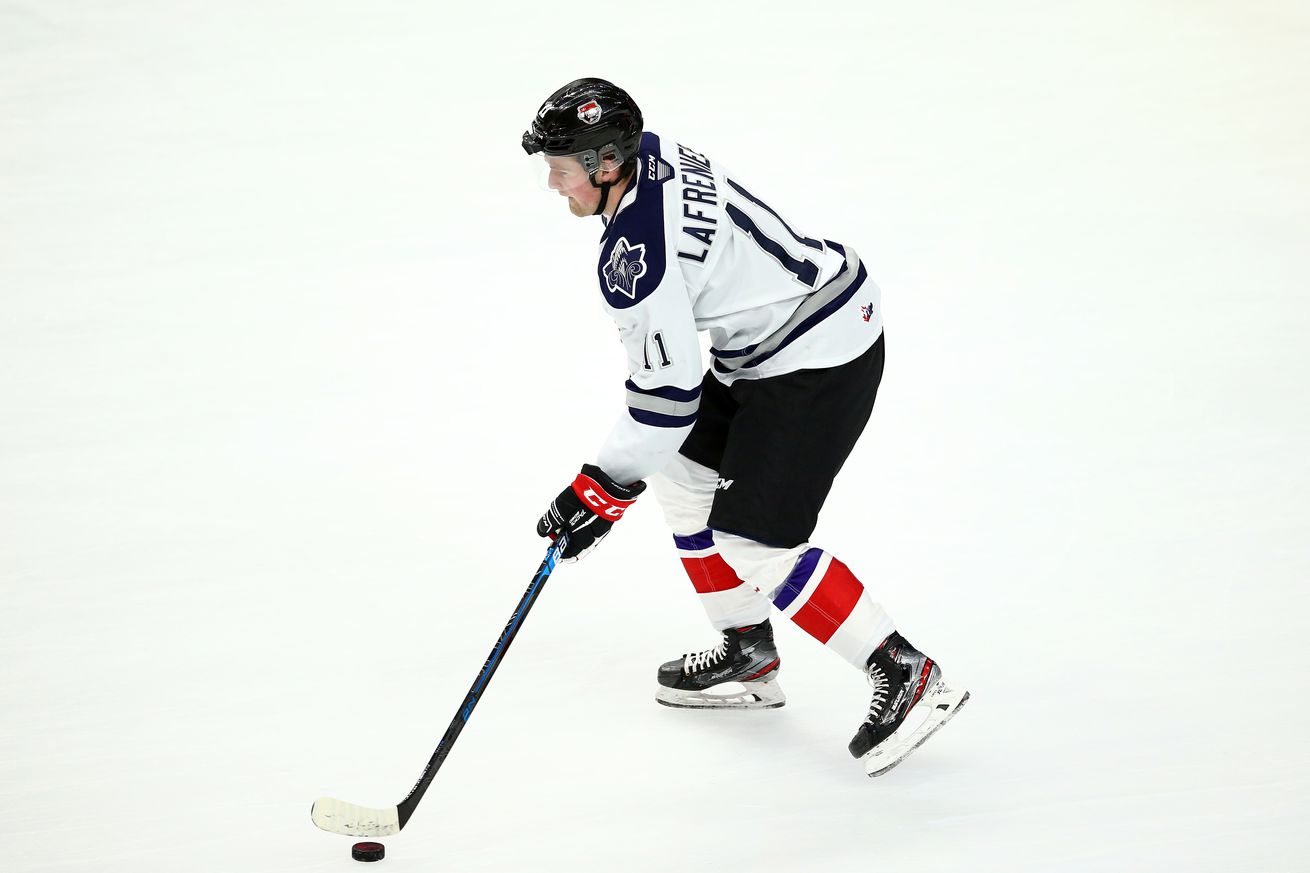 Welcome to the first installment of a five part series that I will running over the next several weeks. Fresh off of winning the first overall pick, excitement is at an all-time high, and I thought, why not doing something fun? The plan of attack is to release one article per week that will cover an entire season and outline all of the major storylines that took place along the way.

For the first season, I tried to keep things relatively realistic to lay a foundation. But as we progress through the seasons, there’s no promises on where this will end up. The end goal is to try and win at least one Stanley Cup during our five-year timeline, so we’ll see where this takes us.

Without further ado, let’s get into our first season.

Being that we are beginning this franchise simulation in the current scope of the NHL, I went ahead and simmed the 2019-20 season with trades completely turned off across the board. The reasoning behind this was to keep all of the current rosters intact and then start fresh from the current state. That also brings us to the 2020 NHL Draft, where we needed to improvise a little bit in order for a realistic outcome, and to officially welcome Alexis Lafreniere to Broadway.

Since NHL 20 doesn’t allow you to reassign draft selections, I created a randomly generated player and made him the highest possible potential with the lowest overall. This allowed me to acquire the first overall pick from the Calgary Flames (the randomly generated lottery winners) without changing the overall makeup of the Rangers’ assets or affecting the integrity of the simulation. So the final deal wound up being New York’s own first-rounder (13th overall) and our randomly generated player for the number one pick.

In addition, with the Rangers projected to pick in the 21-24 range with Carolina’s selection we went ahead and swapped first-round picks with the Chicago Blackhawks (#22 overall) to finish off our house cleaning duties.

Now, onto the offseason.

The first order of business of the offseason was the 2020 NHL Draft, where we officially welcomed Alexis Lafreniere to the fold on the opening night of the draft. This was the clear cut selection with the top pick in the draft, and Lafreniere will fit nicely into the top-six for the upcoming season.

Now here’s where things get interesting. After numerous attempts to move the 22nd overall pick in exchange for upgrades at center and left defense, nothing was able to materialize. So by deciding to make the pick, we went with Kaiden Guhle, the left defenseman from the Prince Albert Raiders of the Western Hockey League. Even though we weren’t able to deal the pick for immediate help at the NHL level, the selection of Guhle gives the Rangers some additional depth in the prospect pool on the left side of the blue line.

Fast forwarding ahead to the third round, there was quite a surprising development that didn’t make much sense, but was a no-brainer when the opportunity presented itself. For whatever reason, Seth Jarvis had slipped all the way down the draft board and was still available at #65 when our pick rolled around. Thank you very much.

Rangers welcome back their free agents

With not many options on the free agent market that made sense for the current roster makeup, we decided to retain what we had on the short-term and reevaluate at the trade deadline. This meant that all of our expiring contracts were brought back for next season, but nothing longer than two seasons. This helped fill all of the holes the Rangers currently have on the roster, while still providing options to upgrade in certain areas in the near future.

The following contracts were agreed to prior to July 1st.

Looking around the rest of the league, the most notable names on the market included Taylor Hall and Alex Pietrangelo. In another surprising turn of events, both of the big fish wound up opting for money rather than trying to land with a contender. Pietrangelo signed a seven-year contract with the Detroit Red Wings that came in at $9.95 million. As for Taylor Hall, he also cashed in very nicely as he signed the dotted line on a seven-year, $9.3 million deal with the Los Angeles Kings.

With the St. Louis Blues still in salary cap trouble, even with the departure of Alex Pietrangelo, we were able to take advantage of their dire situation. The Blues had placed Vince Dunn on the trade block just after free agency opened as he remained without a contract. We were able to swoop in and acquire the 23-year old in exchange for Libor Hajek and a 2021 3rd-round pick, which was originally acquired from the Buffalo Sabres in the Jimmy Vesey trade.

Dunn gives the Rangers a perfect compliment to play alongside Jacob Trouba on the top pairing, and also fits into the long-term plans. Following Dunn’s arrival in New York, he signed a three-year deal with an annual average of $4 million to keep him in New York for the foreseeable future.

To open up the regular season, we opted to use the following lines that gave the Rangers the best possible chemistry outcome. This had Alexis Lafreniere making his NHL debut on the top line alongside Mika Zibanejad and Pavel Buchnevich, while Artemiy Panarin hoped to replicate his previous success with Ryan Strome. Kaapo Kakko also made the leap into New York’s top-six where he would be counted on to provide additional scoring.

The Rangers ran into some injury troubles early in the season with both Alexis Lafreniere and Pavel Buchnevich going down with injuries until late November. The loss of two key forwards was hard to overcome in the opening weeks of the season, and the New York struggled out of the gate. With Lafreniere and Buchnevich finally returning to the lineup in late November, their returns sparked several small winning streaks to put New York back within the playoff picture.

At the Christmas break, the Rangers sat at 18-16-0 in the standings which was good for third place in the Metropolitan Division. The trio of Artemiy Panarin, Ryan Strome, and Kaapo Kakko continued to carry a majority of the offensive output for New York. Strome led the entire team in points at the trade deadline with 59 points in 61 games.

With injuries on the blue line piling up near the trade deadline, the decision was made to trade for additional help. In a relatively low-risk move, the Rangers acquired Jordie Benn from the Vancouver Canucks in exchange for a 2021 4th-round draft selection. Benn helps fill an immediate need for injury replacement, and will be an ideal 7th defenseman for the remainder of the season.

New York went on an absolute tear following the trade deadline, and compiled a record of 17-8-2 to secure third place in the Metropolitan Division. Next up, Alex Ovechkin and the Washington Capitals.

After missing the playoffs the previous two seasons, the Rangers matched up with a familiar foe in the Washington Capitals. Washington’s offensive prowess was evident through the first two games as they jumped out to an early 2-0 series lead. However, the return home to Madison Square Garden proved to be a pivotal point in the series as the Rangers were able to knot up the series.

Artemiy Panarin and Alexis Lafreniere led the way in Game 3 with two late third period goals. In Game 4, the youth took over once again as Lafeniere, Kaapo Kakko, and Artemiy Panarin lit up Ilya Samsonov in the third period to secure a 5-3 victory. The Rangers continued to surge after their two wins on home ice, and took a 3-2 series lead with a win in Washington. Marc Staal started the Rangers’ goal scoring barrage off with a……shorthanded goal? New York never looked back from that point on.

Unfortunately for the Rangers, Igor Shesterkin suffered an injury at the end of Game 5, and was put on the shelf until May 31 with a herniated disc. Enter Henrik Lundqvist. Following a third period scare in Game 6, the Rangers were able to hang on to a one-goal lead and wrap up the series in Washington.

Much like the Washington series, the Rangers had two rough outings to open the series and found themselves in another 2-0 hole. An overtime stunner by Carolina in Game 2 sent the Rangers back New York with a chance to turn this series around. However, the Hurricanes’ defensive structure absolutely smothered the Rangers, and New York was unable to overcome the series deficit. In four games, the Rangers were only able to muster up five goals as Carolina improved to 8-0 in the playoffs.

With a four game sweep out of the second round, the Bunch of Jerks awaited their next opponent while New York was sent home packing.

Points Leader: Ryan Strome (85 points). After signing a one-year “prove it” deal, Ryan Strome delivered in big ways. There were some concerns about the long-term future of the 2C spot, but Strome appears ready to take on that role. #16 will likely command a big pay raise next season, but with several expensive deals expiring in New York next season, that shouldn’t be much of an issue.

Goals Leader: Kaapo Kakko (37 goals). A breakout year for the young Finn. He lead the team in goals and anchored the top scoring line on the team. In just his second season in New York, Kakko is already off to an incredible start.

Top Defenseman: Vince Dunn (33 points). Quite the Broadway introduction for Dunn, who led all defensemen on the team with 33 points. With two more years remaining on his current deal, Dunn appears to be fitting in quite nicely with the young core.

Calder Trophy: Alexis Lafreniere (57 points). No real surprise here. Alexis Lafreniere entered the year as the odds-on favorite to win the Calder and he did not disappoint. Alexis settled in quite nicely on the top line and didn’t need much of an adjustment period in his first NHL season.

Overall, not a bad first season at the helm. There was some much needed growth from Alexis Lafreniere and Kaapo Kakko, which should only improve the deeper we get into this five-year run. Some of our questions were answered with the 2C position as Ryan Strome blew away all expectations once again. Strome finished top-10 in scoring throughout the entire league, and was the primary setup man between Artemiy Panarin and Kaapo Kakko.

With Marc Staal, Brendan Smith, and Henrik Lundqvist all coming off the books, the Rangers will have some wiggle room to make some roster decisions. Should Ryan Strome be kept at all costs? Do we look elsewhere via trade/free agency to improve the roster? What about the future of Tony DeAngelo? Leave your thoughts in the comments and stay tuned for Season 2 coming up next week.