The New York Rangers traded a seventh-round pick for the opportunity to negotiate with Barclay Goodrow ahead of free agency, and it looks like it may result in a long-term contract. Frank Seravalli of Daily Faceoff tweets that there has been significant progress between the two sides on a six-year contract that will carry an average annual value of around $3.6MM. Even if agreed to, the contract would have to wait until July 22 when the transaction freeze is lifted. 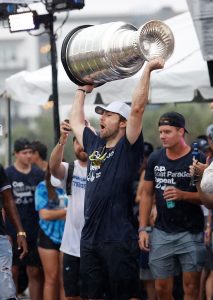 Goodrow, a two-time Stanley Cup champion with the Tampa Bay Lightning, has never scored more than eight goals in a single season and reached a career-high of 26 points in the 2019-20 campaign. Despite that lack of offensive success, the 28-year-old forward is still a valuable, versatile, bottom-six piece that the Rangers obviously believe can help them take the next step. Able to play center and the wing, Goodrow brings size, physicality and a penchant for showing up at the most important moments.

In 2019, before he even joined the Lightning, Goodrow finished one of the most remarkable comebacks in NHL history when he scored an overtime goal for the San Jose Sharks. The Sharks had been down 3-0 partway through the third period of game seven against the Vegas Golden Knights, but scored four times on a single powerplay to take the lead. After Jonathan Marchessault scored to send it to overtime in the dying seconds, it was Goodrow that would slice through the Vegas defense and end the game in overtime. He scored another game-winning tally this year against the Carolina Hurricanes, but it was a shot block late in the deciding 1-0 game five against the Montreal Canadiens that will be remembered most from this postseason run. Goodrow threw his body in front of a Shea Weber blast in the final minute of the game, leading to his coach Jon Cooper pointing to the play as one that “sums up the character” of the Lightning.

Many will rightfully question whether that kind of contribution is worth $3.6MM or a six-year contract. Long-term deals for bottom-six players have very rarely worked out in favor of the team that signs them, and this would certainly qualify as one of the more risky examples. Goodrow’s six goals and 20 points look fine as a depth option making $925K in Tampa Bay, but it’s hard to see how he’ll bring much excess value to New York.

The Rangers changed their entire front office and coaching staff this year, with some reports at the time indicating that it was a few embarrassing losses to the New York Islanders that confirmed the decision for owner James Dolan. If that’s true, then perhaps the team is attempting to follow the Islanders’ model of quality depth throughout the entire lineup—a philosophy indicated once again by the team’s protection of Matt Martin and Cal Clutterbuck this week. The Rangers also protected Kevin Rooney, himself a fourth-line option that brings size, versatility, and physicality to the bottom-six.