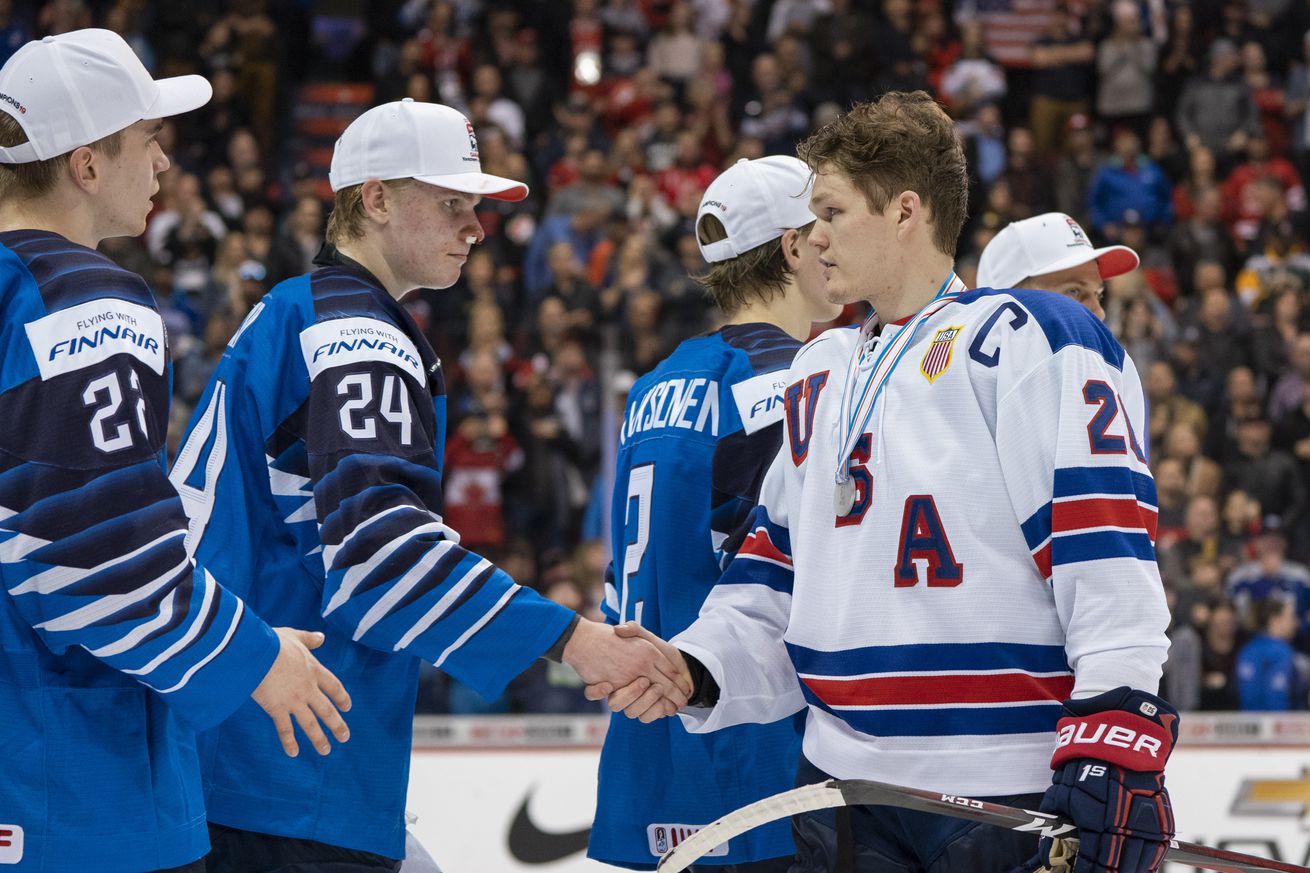 Joe Fortunato note: There is a chance the New Jersey Devils — who won the lottery outright — might not take Jack Hughes and may instead take Kaapo Kakko. We’re going to work under the assumption that they do not, and stick to the expectation of Hughes being the top pick. This article works regardless of which of the two fall to the Rangers, though.

It sure feels like luck was smiling down on the New York Rangers Tuesday night, when they jumped from 6th to 2nd in the two-name 2019 NHL Entry Draft. It all but assured that the team will be selecting Finnish forward Kaapo Kakko. Later in the evening, General Manager Jeff Gorton revealed the good luck charm he brought with him for the draft:

This was our good luck charm thanks to the McDonald family!! #TogetherWeAre104 #NYR pic.twitter.com/z6e4iMenHw

And now it feels like Steven McDonald is here smiling ear to ear with us, too.

On an already emotional night, a victory off the ice that very likely changes the New York Rangers’ organization for the foreseeable future on it, this was the cherry on top. If you are a fan you feel that quick lump form in your throat when you see this. You feel the chills that run down your spine when you realize what Gorton was holding. How he got it.

The New York Rangers do so many frustrating things that make you want to smash your face through a fresh panel of drywall, but they also do so many of the emotional things right. They surprise you with moments like this, out of the blue, completely (for me at least) and unexpectedly that hit you right in the heart. Of course the Rangers won the lottery. Of course they did. How could they not? McDonald has to be pulling strings up there, right? You feel him the same way you feel others in the Garden — or at least the way I do when something happens in a game that has my hands on my head and for a moment when I’m caught up in the magic I feel my Uncle Tino there next to me, binoculars in hand, if even it only lasts a second.

And the truth of the matter is, it really does feel like divine intervention. The Hockey Gods intervention that is. And maybe a little Steven McDonald on the side.

The Rangers are already today, without yet having made a single selection in the 2019 Draft, in a drastically different position than they would have been otherwise. That is Kakko; that is what he means and what he can be. Before the lottery, I tried to temper expectations a little, with the odds heavily favoring the team not grabbing a first or a second round pick.

Just going to say this now, before we go into the lottery: This year’s draft is pretty universally agreed upon as being on the weaker side. NYR would get a franchise-changing player if they hit 1 or 2, but if not, there’s plenty of first-line guys between 3-8. So no panic.

And in reality that take is still true today.

Adam, Tobias, and Alex will have a deeper profile of him as we come to the lottery portion of the Blueshirt Banter draft rankings, but here’s a little quick blurb to get you excited about him (from foreign contributor Patrik Bexell to avoid overlap with our staff):

Kakko is never in a rush. He slows the game down to his own speed, reads the play very well, and oozes hockey IQ. He is usually in the right position even before the puck has left the stick of his teammate. His movement without the puck is great for such a young player, though his speed could be improved during the off-season. His agility and lateral movement already stand out, and suggest that improving his pace shouldn’t require a lot of work.

Due to his size, he can protect the puck well, even in the tough battles along the boards. When his hands aren’t being used to dangle defenders halfway to Helsinki, they’re protecting the puck before delivering a pass out of a scrum to an open teammate.

OK, let’s move past his potential for a moment because we can only drool for so long. Here’s what we do know: Vitali Kravtsov is expected to come over next year, and Kakko will be on Broadway opening night as well. That’s an infusion of two more kids, and two more wingers to go with Chris Kreider, Pavel Buchnevich, Jimmy Vesey, Brendan Lemieux, Vladislav Namestnikov, Jesper Fast, Ryan Strome, and Filip Chytil (if he remains a winger). Larry Brooks has already stated that Vesey is likely gone this summer, and it’s safe to say Namestnikov will be shopped as well, but will likely start the year with Lemieux, Fast, and Strome in the team’s bottom six.

The extra wingers become important when you realize the Rangers’ grand plan of Artemi Panarin, who would be yet another — you guessed it — winger. Would the addition of Kakko, Kravtsov, and Panarin this summer allow the Rangers to get more aggressive with trading Kreider at the draft this year (something Mike and I speculated on the Off The Post this week)? There’s been logical connections made to Kreider being used as bait for Jacob Trouba, who is owed a new contract this summer and has a tension-filled relationship with that organization at their best. Can the Rangers leverage Kreider to add a top-pairing, 25-year-old defenseman to their ranks?

Can they speed up the process with Carolina, and give them a fee (say a maximum of a third-round pick) for Adam Fox — who is all but publicly yelling that if he gets to free agency next year he is signing with one team and that one team is the Rangers? Are they more willing to part with a higher-end lottery pick (3rd round picks ain’t nothing!) because they know they have a franchise-changing guy in the fold? And then once they have Fox do they make the easy decision to move on from Neal Pionk, and get even more value back?

Speaking of, how much more value do the Rangers get in this rebuild because they’re able to take a more aggressive approach when it comes to wingers? To avoid a Strome contract extension that would likely be disastrous and maybe dangle him this summer as well while his value is at its highest. To allow Gorton to shift assets from a position of power in order to avoid letting the defense continue to rot for another season. To having — finally — a piece you can build around without much question. Does it make the Rangers that much more of an attracting land spot for Glen Sather’s replacement? For, say, Steve Yzerman?

How much different would the Rangers look next year if they look like this:

Within those two groups, you have the core of a truly elite-level forward group, with an outright lethal top-six and a defense group that can hurt you on offense as well. The defense will likely have bumps with so much youth in prominent positions, but that has the makings of a group that can really become something special. Things would need to happen; be it buyouts, trades, or even people being sent down, but the pieces could be there.

That team will have their own share of problems next year, but they would be far better prepared for a playoff run than if the Rangers had missed out of Kakko/Hughes altogether. Adding a dynamic player right away, even though he might not give you more than 40 points or so in his first season, changes the outlook entirely. Gorton has often talked about speeding up the rebuild, and it feels like they have already done that, even though they haven’t done anything yet.

Kakko, for all he is, is not Connor McDavid, but he is a player of a class the Rangers have not had in a very long time. Not a generational player by any means, but perhaps the level down. A franchise changing guy regardless, and the type of guy they have not drafted organically in even longer. Kravtsov just moved back to be the team’s second best prospect, and that wasn’t likely until the team won the lottery. Kakko, at 18, is 12 years away from 30, his prime is years away, this time in the right direction. He is a boy playing among men, winning physical battles against men, in a men’s pro league. Next year we will see the same thing in the NHL. And he will be 18 when he enters the league.

The Rangers woke up today in the best shape they’ve been in since they started this rebuild two years ago.

That is Kakko too.