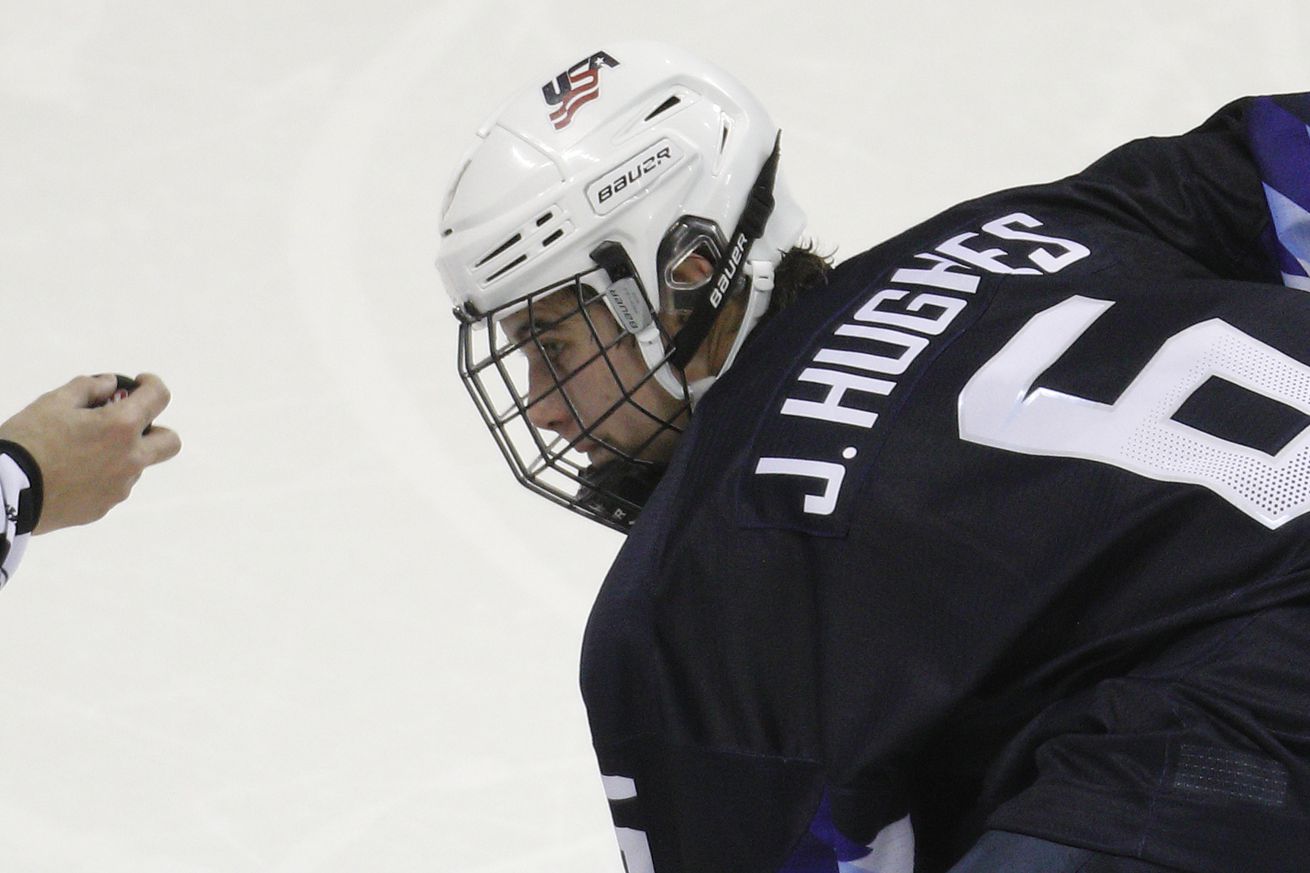 Hughes and Kakko are equally talented, but would send different kinds of ripples down the Rangers’ depth chart.

Barring the shock of a lifetime on draft day, Rangers’ General Manager Jeff Gorton will have the easiest job in hockey June 21st, when the 2019 NHL Entry Draft commences. The New Jersey Devils will make a very tough decision to draft either Jack Hughes or Kaapo Kakko with the first overall pick. Then, Gorton and crew will immediately strut towards the stage and announce the name of the other player.

The hard part comes afterward, as the Rangers will then have to build a team around those players. The decision that the Devils will effectively make for the Rangers will change the Rangers’ depth chart, and that will have a domino effect down the lineup. Let’s take a look at the hypothetical fallout from the Rangers’ theoretical acquisition of either Hughes or Kakko.

Hughes is a natural center and there should be no desire to change that. Is he a bit undersized? Yes. Does he need to work on the defensive side of the game? Absolutely. But his ability to make plays from the middle of the ice is otherworldly. He will almost certainly become a #1 franchise center. Not McDavid or Crosby, but definitely one whom you cement to that first-line center spot. Everyone else must be malleable.

Mika Zibanejad drops down to second-line center. If not immediately, then certainly within a season or two. He also is not moving from the middle of the ice, as he is by far the Rangers’ best defensive center.

That creates quite the logjam for Filip Chytil, Lias Andersson, and Brett Howden. You can get away with that short-term maybe, though one of them playing 8-11 minutes on the fourth line every night is far from ideal. Long-term, that absolutely won’t fly. There’s one top-9 C spot earmarked for three different players. What can the Rangers do?

For one, they could move Chytil and/or Andersson to the wing. That is inadvisable for different reasons. In Chytil’s case, we know he can do the job. He played wing this season and, relative to age, did a perfectly fine job. However, putting Chytil on the wing long-term would be like buying an expensive smartphone and using it only as a calculator. It’s not that it won’t do the job, but rather that you are wasting its capabilities.

For Andersson, it’s the opposite. Regardless of what you think of the decision to draft him, his numbers in Sweden present the idea that he has some upside. I’m not sure that’s best represented on the wing. His weaknesses – lack of speed and skill on the puck – don’t bode well for a top-nine winger. His strength, nose for the net, and defensive awareness better suit him at center instead. The same is true for Brett Howden.

Drafting Jack Hughes would create a problem of too many centers around the same age. That would not need to be solved right away, but certainly within 12-18 months. There are many moving parts, but a reasonable prediction is that Jack Hughes’ arrival would eventually force the trade of Lias Andersson or Brett Howden. Maybe even both.

Kaapo Kakko would solve a number of problems for the Rangers. He would also create a big one, though it would be a “good” problem. Kakko, though a left-handed shot, primarily plays the right wing. So do Vitali Kravtsov and Pavel Buchnevich, who are also left-handed shots. At even strength this is probably not too much of an issue. One of those three would make for a hell of a third-line winger over the next few seasons.

As we’ve seen the last two seasons, however, the Rangers’ lack of right-handed shots has absolutely plagued them in a number of ways. This is especially problematic on the power play. Furthermore, it will fundamentally alter the Rangers’ breakout tactics. Off-wing players in the defensive zone have a much harder time receiving outlets and moving the puck up the boards.

There are of course ways around this, both tactically and in terms of roster makeup. The Rangers could move one (or two) of Kakko, Kravtsov, and Buchnevich to their natural sides. However, that would neuter some of Kakko and Kravtsov’s best abilities, while Buchnevich played his best hockey last season on the right. In fact, there are many benefits to playing the off-wing. It makes zone entries towards the middle of the ice easier and creates more dangerous shooting opportunities. Quinn and Gorton might decide together that this isn’t a problem.

As for the plethora of left-handed wingers, a solution could be to add a talented right-handed shot who plays left-wing. I don’t know, but perhaps somebody like…

Whether it’s Hughes or Kakko, the Rangers will have to purge some of their depth approaching UFA status. Jimmy Vesey and Ryan Strome would likely all be sent packing one way or another by July of 2020. Their roles will become more limited than they were this season due to the influx of talent, and the Rangers will need the salary cap space regardless. So too goes Vlad Namestnikov, who is a fine depth forward but whose contract demands will outweigh his contributions. It would be wait-and-see mode for Fast’s and Lemieux’s contract demands this summer, though their roles on the team are more varied and they are far more likely re-sign candidates.

In the case of Kakko, the positional overload makes it a bit more complicated. Kravtsov and Kakko would become restricted free agents at the same time in 2022. If Panarin signs, then that’s not going to leave much room for a Chris Kreider extension. Pavel Buchnevich is likely to sign a short-term bridge deal this summer, but down further down the line he too could be a potential victim of the cap.

For Hughes, it’s a less immediate concern as both Chytil and Zibanejad are under control for multiple years. At some point, though, this would become a concern. It’s hard to imagine all three coexisting and fitting under the salary cap in four or five years.