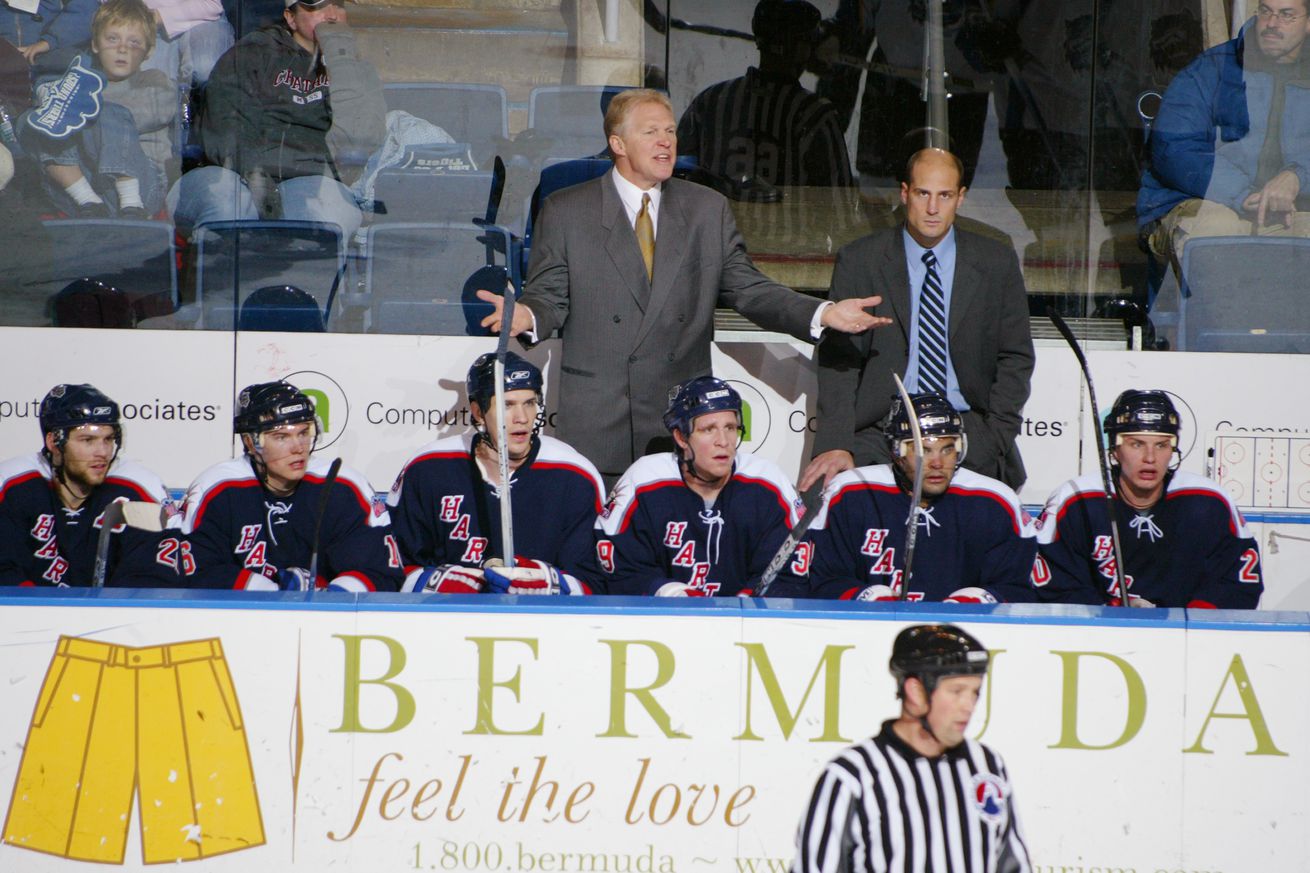 Jim Schoenfeld isn’t the coach of the Hartford Wolf Pack, but this image represents a concept of, “what gives?”

The Hartford Wolf Pack’s 2018-19 campaign ended in a 3-1 loss to the Hershey Bears on Sunday, and the team finished with an overall record of 29-36-7-4 for 69 points. The franchise has now missed the postseason in seven of the last 10 seasons, and this year’s campaign was the second-worst in franchise history.

The lowest mark, 54 points, was established during the 2016-17 campaign. Prior to that the Pack/ Connecticut Whale had never failed to finish with fewer than 70 points in a season.

It goes without saying that change is needed, and it is a topic that’s been covered a few times at Blueshirt Banter this season.

But looking at the fact that they finished with just 69 points really hammers home the point that there needs to be additional attention and focus paid on the Blueshirts’ AHL affiliate.

This year’s roster drastically lacked talent this season, and that’s evident by the offensive production among the leading scorers.

Other notable names include 26 points in 61 games by 2015 No. 41 overall pick Ryan Gropp, 20 points in 36 games from Lias Andersson, four points in five games by recent signing Jake Elmer, and four points in 22 by late season acquisition Darren Raddysh who had posted 26 points in 54 games with the Rockford IceHogs.

The goalie situation was a bit muddied this season as four goaltenders appeared in at least 10 games, with Adam Huska appearing in nine, and Chris Nell appearing in just two.

These results highlight a them of poor defense, because it is hard to imagine all of these goalies were that bad. Georgiev had some of the poorest numbers of the bunch, but he was able to put together a decent effort for the Rangers at the NHL level.

There are no easy fixes, and it is something that is going to take time, but it needs to be a priority of the new Rangers’ team president as I highlighted in this story last week.

It could be as simple as signing players who are designed to remain with the team as mentors and teachers, and not to be in place as insurance in the event there’s an injury with the pro club. This could be extended to paying more attention to who is in the ECHL.

Something has to give, because the Pack were once a model AHL franchise. In their history they have finished with 90 or more points 11 times, and 100 or more points five times. This is just the second time they’ve failed to clear 70 points, and this season represents a regression of eight points from last season. Is it a talent issue? Is it a coaching issue? Is it a little bit of both? These are questions that need to be answered, because having the Pack be bad isn’t in the best interests of the rebuilding Rangers.