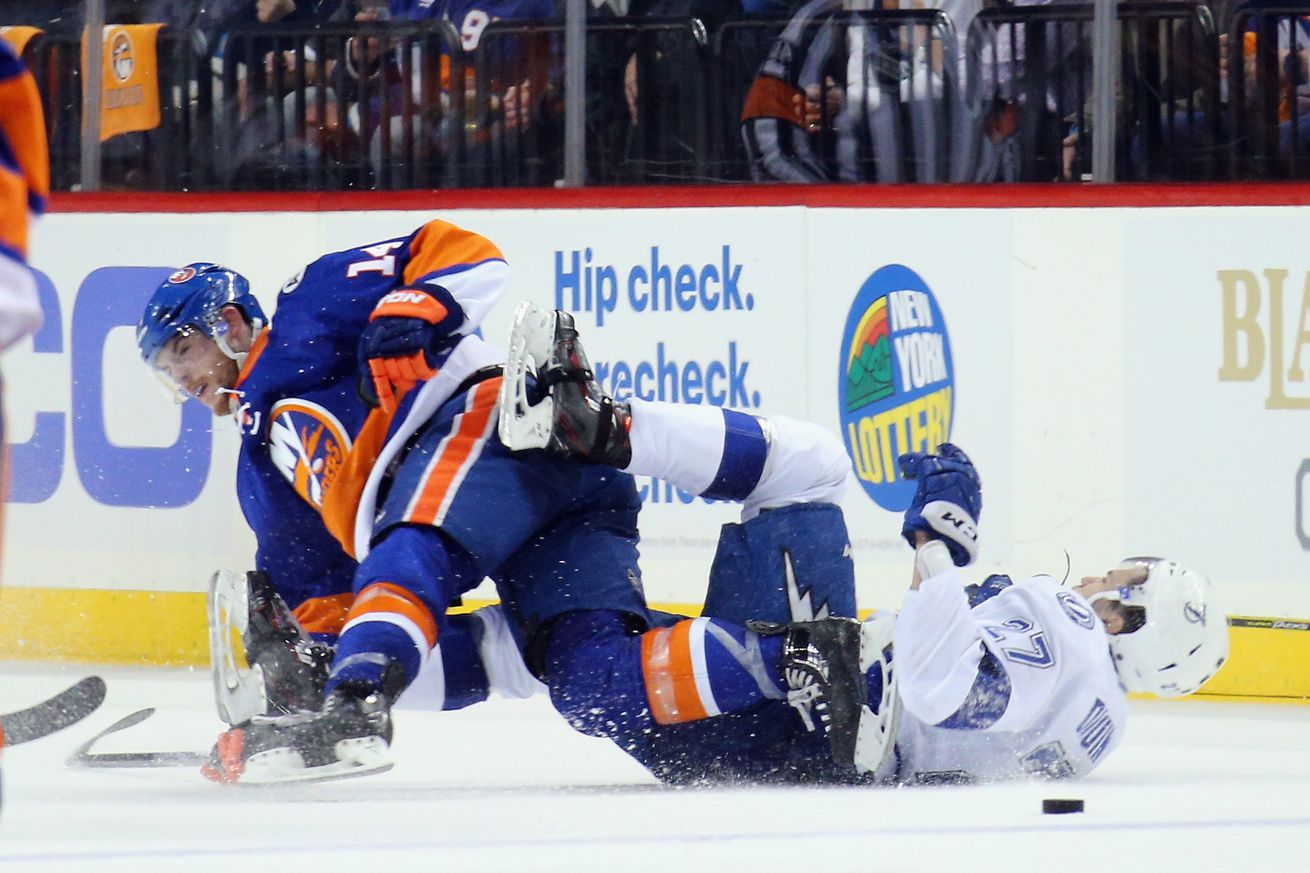 It’s short, brief and unsuccessful for the Islanders

The Islanders have advanced to the Eastern Conference Finals for the first time since 1993. (It was still the Wales Conference Finals) Just to bring everyone up to speed what was happening that year, Cheers was about to finish its 11th and final season on NBC, Snow’s Informer was on the charts, Charles Smith was missing shot after shot for the New York Knicks in Game Five of the NBA Eastern Conference Finals against the Chicago Bulls and your truly was getting ready for his senior prom.

Ironically the 1992-93 season was the first for the Tampa Bay Lightning, who finished with 53 points in their inaugural season.

The Islanders have faced the Lightning twice in the playoffs. Tampa is the only team the Islanders have not defeated in a playoff series (minimum two series). In fact, they have only won two games.

The Lightning were the Eastern Conference regular season and Southeast Division champions. They won the division by 28 points. The Islanders, in Steve Stirling’s first season as head coach, finished with 91 points and entered the playoffs as the eighth seed. New York dominated the regular season series between the two teams, winning three of four games and outscoring Tampa Bay 13-6.

The five-game series featured four straight shutouts. Nikolai Khabibulin blanked the Isles 2-0 in Game One. Rick DiPietro flipped the script in Game Two, stopping all 22 shots he faced as the Isles evened the series with a 3-0 win. It was DiPietro’s first career playoff win in his second start. Jason Blake scored twice and Janne Niinimaa got the Isles on the board first.

The series moved to the Coliseum as the Islanders had one of the NHL’s best home records in the regular season (25-11-4-1). The Lightning quieted the Coliseum crowd with two goals in the first seven minutes of the game en route to a 3-0 win. Art Ross and Hart Trophy winner Martin St. Louis finished with two goals.

Game Four was more of the same as Nikolai Khabibulin recorded his third shutout of the last four games to move the Islanders to the brink of elimination. ”The Bulin Wall” extended his shutout streak to 120 minutes, 55 seconds.

Game Five featured the highest-scoring game of the series as the Lightning eliminated the Islanders, 3-2 in overtime on St. Louis’ winner. The Lightning went on to win the Stanley Cup. The Islanders had to wait another 12 years to win a playoff series.

The Islanders headed into the playoffs as the first wild card. Their path took them to the Atlantic Division, where they defeated the Florida Panthers in the first round, giving the Isles their first playoff series win in 23 years.

Their second round opponent, the Lightning, finished with 97 points, three fewer than the Islanders. The kookiness of the NHL had the Isles open up on the road.

Game One opened up with an early goal by Ondrej Palat. The Islanders tied the game two minutes later on a Travis Hamonic goal. Shane Prince scored twice in 2:30 to give the Isles a 3-1 lead heading into the first intermission. John Tavares continued his hot streak by scoring in the second period. That goal chased Ben Bishop in favor of Andrei Vasilevskiy. Tampa made it scary in the third bringing the game to 4-3. Cal Clutterbuck’s empty-netter sealed the win for the Islanders.

Tyler Johnson had two goals and an assist as Tampa evened the series with a 4-1 win. The game was actually close for the first two periods. New York failed to mount any response in the third. Bishop rebounded after being pulled in Game One with 19 saves.

Game Three was clearly the game of the series. The fireworks started in warmups as Brian Boyle and Travis Hamonic bumped into each other. Josh Bailey got the Isles on the board in the first period but allowed the Lightning to tie the game with 13 seconds left in the first.

With the game even at two, Josh Bailey scored a power-play goal off a nice feed from Thomas Hickey to give the Isles a 3-2 lead. The lead was short lived as Vladislav Namestnikov tied the game. Halfway through the period, Cal Clutterbuck capitalized on a Lightning turnover and went top shelf on Bishop, giving the Islanders a 4-3 lead.

Jack Capuano’s team had a chance to get the all important insurance goal. Josh Bailey had a great chance from the slot off a nifty pass from Tavares but Bishop came up big, as he did also on Nikolay Kulemin. The Lightning pulled Bishop with two minutes left. Capuano inexplicably had Tavares and Kyle Okposo on a shift in the Isles zone. Sure enough, the Bolts capitalized as Nikita Kucherov put one pass Thomas Greiss off a pass from Jonathan Drouin. The game headed to overtime.

Overtime became the Brian Boyle show, as the forward scored 2:48 into overtime after a controversial hit on Thomas Hickey, who earlier in the game, delivered a crushing, but legal hit, on Drouin (see above).

Capuano certainly thought the Boyle hit on Hickey was a direct shot to the head.

Capuano said Boyle’s hit on Hickey was “direct shot to head.” Thinks Boyle should be suspended. “Type of hit we’re trying to take out game.”

Boyle was not suspended. The home-ice advantage the Islanders got from their Game-One win was now gone. Game Four saw the Islanders get off to a quick start thanks to Kyle Okposo’s power play goal in the first period. It was Okposo’s last goal as an Islander. It was also the last shot that the Islanders would get past Bishop that night. Greiss and Jean-Francois Berube would keep the Lightning scoreless for two periods. Berube filled in for Greiss for just under five minutes in the second as Greiss has his right skate blade fixed. Berube would face just two shots.

Nikita Kucherov would continue his hot streak as his third period goal would force overtime. The Russian did not wait until under a minute left as he did in Game Three to tied the score.

Overtime would be quick and painful for the Islanders as defenseman Jason Garrison’s shot from the point somehow got past Greiss to give Tampa a commanding 3-1 series lead. The Islanders could have easily been going back to Tampa up 3-1.

Game Five showed why Tampa was the defending Eastern Conference Champions as they easily defeated the Islanders 4-0. Victor Hedman’s skills were on display on both ends, scoring two goals and blanketing Tavares all series. Following the Game One win where Tavares would score a goal and net an assist, the captain was held scoreless in the final four games of the series. Game Three hero Brian Boyle extended the Tampa lead to 2-0 late in the first period. Nitika Kucherov contributed with his ninth goal of the playoffs with the Lightning’s third goal. Ben Bishop earned his fifth career playoff shutout and fourth in the series-deciding game.

The forward can exact revenge over the Lightning starting tonight.