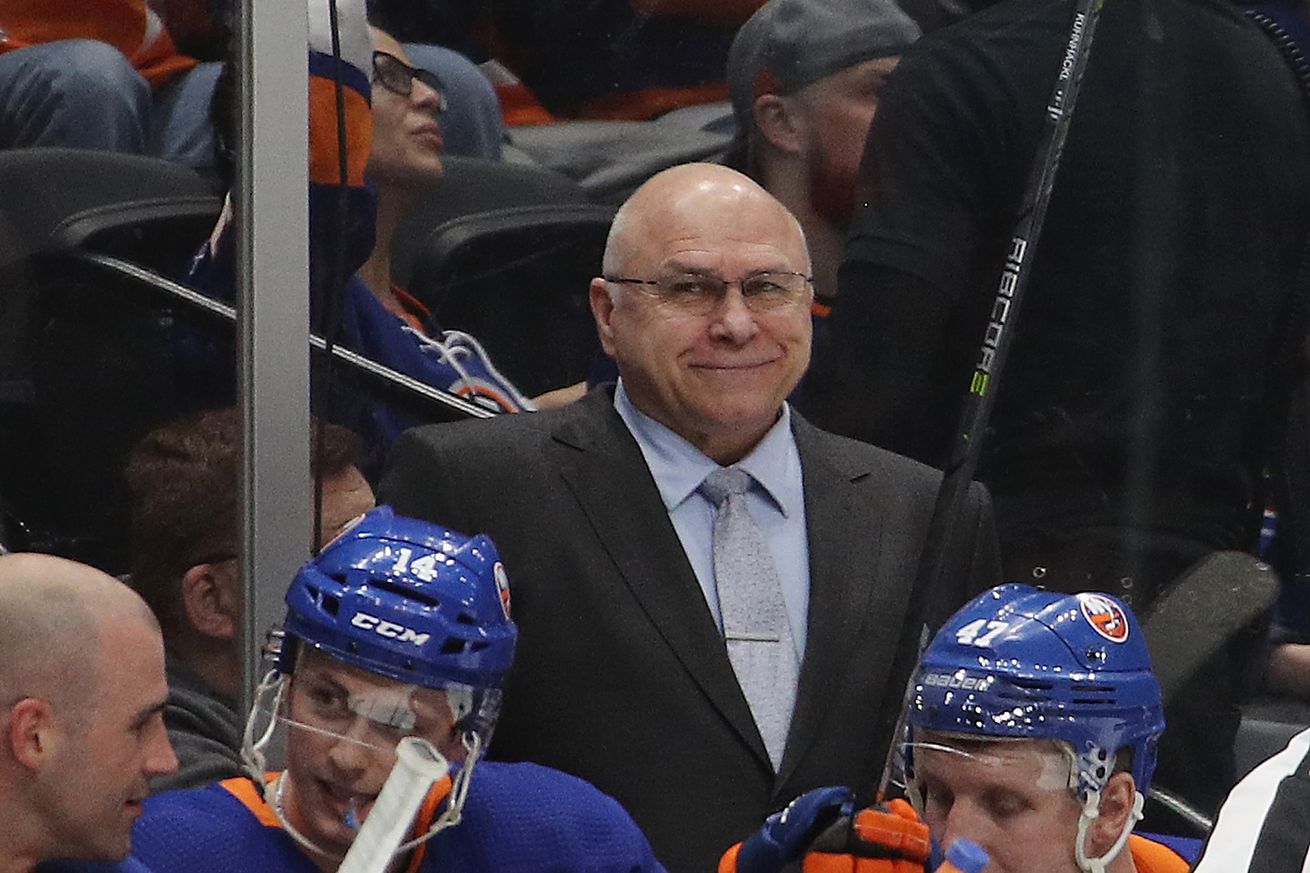 The fall of the Penguins? It starts with Barry Trotz, of course.

Viewed a certain way, and because it’s hockey, the New York Islanders could easily be trailing their first-round series 2-1 or even 3-0 to the Pittsburgh Penguins.

But putting aside “well but if this, then maybe” conditionals, and avoiding the tendency to act like a 3-0 series lead after three close games means nothing but absolute domination, here are the chief factors in why Barry Trotz’s men have carved out advantages to be on the verge of a humiliating end to the Penguins on Tuesday night.

Trotz split up the 2017-18 dynamic duo of Jordan Eberle and Mathew Barzal early in his first season behind the Islanders bench, depressing both of their offensive numbers, but clearly with a larger purpose: to get last season’s first-semester-at-college freedom under Doug Weight out of their game, so that they could become more reliable decision-makers no matter which teammates they played with. (More on this central tenet later.)

Then, as if he’d sent them to a year of finishing school and was ready to see what they learned, he reunited them in the final weeks of the season, the better to capture their offensive magic while making them reliable cogs in his diabolical machine.

The result? Eberle scored a quarter of his regular season goals since that reunion, and has scored in each game so far in the series with the Penguins.

As Arthur Staple quoted Barzal in the weekend piece at The Athletic: “When Barry put us back with each other, we basically said, ‘We’re going to force him to trust us,’” Barzal said. “We tried to make it so he couldn’t break us up. What we did last year was great, but it’s a new system and we had to play different.”

Quite clearly, Barzal’s creativity helps unlocks Eberle, and Eberle has an ample supply of magic in his own right that allows Barzal an outlet. Now at the most important time of year, that creativity has been unleashed without sacrificing defensive reliability.

So Eberle’s first goal got things started in Game 1, followed by his power play assist to Brock Nelson. His dancing dash goal was the winner in Game 2, and his unreal sharp-angle shot — he called it, waving to Ryan Pulock for a pass to the goal line — tied the game and kept the Penguins from feeling good about themselves in Game 3.

As Noel and Dan P. discussed in their post-Game 3 Isles Buzz, you don’t try that shot unless you have the confidence from being able to hit it more often than not. Eberle has that.

The Islanders don’t have many superior offensive talents, but Eberle is one. And instead of putting him in position to be the scapegoat as Edmonton did, they’ve positioned him to succeed. He’s delivering.

This point is more about special teams overall, but especially the power play: It’s not like the Islanders are riding a hot streak with the extra man, but for the first time all spring it is not actively hurting them.

I was a bit flippant but honest before the playoffs in suspecting that the power play would ultimately be their undoing. (And I still fear that will be what eventually does them in.) In the final week of the regular season, the Islanders had returned to form in being able to frustrate and outplay teams at 5-on-5, but without any help from the power play they’d be playing with fire.

Yet the power play has done just enough so far, starting with Eberle’s setup of Brock Nelson in Game 1 and Bailey’s insurance goal to ease the pressure late in Game 2. Meanwhile, the penalty kill has only conceded once, and their 5-on-5 play has been strong enough to make the Penguins do more of the penalty taking.

(To underline hockey’s thin margin of error, the power play could have hurt them in Game 3: They called a gutsy timeout to plot strategy for a 5-on-3 — a move that almost paid off and almost backfired at the same time. The set play Scott Gomez encouraged them to try produced a bomb from Ryan Pulock that Matt Murray got just enough of to deflect harmlessly off the crossbar. Then they had to kill an ensuing Penguins power play that could have tied it and swung the proverbial momentum.)

The only time Robin Lehner has been a question mark all season was in the opening few games when he and the team were still getting used to how the Islanders would play, and when returning from brief injuries.

Otherwise, he’s been lights out, and that has continued (along with his health) in the playoffs. I don’t really have to cite stats to tell you he’s been good (Murray has been good, too, frankly).

An injury could change that, of course, and it equally goes without saying that in the playoffs you need outstanding goaltending, but still: Lehner has delivered that.

In part, that is because…

4) Tao of Trotz is in Full Effect

The Islanders are getting balanced scoring and solid defense. Their approach is frustrating. They haven’t been drawn into emotional outbursts to put them in the penalty box. Meanwhile, the Penguins look lost, out of ideas. Pittsburgh’s stars are getting chances, but not at the high volume to really increase their chances of breaking out.

None of this happens without the whole roster buying into Trotz’s work ethic, full-team buy-in and predictable (to each other) approach.

It at times looks boring for its lack of chaos, but man is it a sight to behold: A diligent pursuit of the high-probability opportunities, with a disciplined restraint to not chase longshot chances that break down their structure. (It’s not ‘90s-era clutch-grab-bearhug hockey either: They’ve had to do all this without the obstruction era’s gifts to less talented teams.)

That’s why Sidney Crosby, despite getting some good chances, is scoreless and a minus, and why Evgeni Malkin has scored but otherwise been most noticeable as a petulant loser at the end of Game 2.

Trotz discussed it between Games 3 and 4:

“I can tell you this: Our focus has always been on the process. One game at a time, one shift at a time. Just play the way we’ve played. We haven’t had to make a lot of adjustments in our game the last 10 games. We believe in what we’re doing. Today we met and fixed a couple of things we feel we can be stronger at, and hopefully that pays dividends [in Game 4].”

You hear it from the Islanders players and you see it in their decision-making on every forecheck, every backcheck, every breakout support, every neutral zone communication, and every post-whistle scrum.

Game 1 saw some rush opportunities for the Penguins…then Game 2 saw the Islanders repeatedly disrupting the Penguins cross-ice pass attempts to gather speed through the neutral zone. The end of Game 2 saw Malkin, Crosby, Phil Kessel having fits. Game 3 included Patric Hornqvist taking absurd swipes at Adam Pelech in the corner — after first boarding him — while Pelech wisely stayed calm and headlocked as a response rather than throw punches for the refs to misinterpret.

As a result, the Pittsburgh team (to use a Butchism) was an opponent almost defeating itself over the second half of Game 3, egged on by Eberle and Brock Nelson’s quick-strikes erasing the Penguins’ brief lead, and the Islanders’ disciplined approach with the lead then sucking the life out of the building.

Not only have the Isles prevented the Penguins from mounting sustained attacks, but they’ve tightened the grip game by game:

(See Trotz’s full media availability from Monday in the embedded Isles tweet below.)

There’s no telling whether the Islanders will be able to repeat this against a new opponent if they reach the second round, and surely a loss in one or both of the first two games exacerbates their thin margin of error.

But right now they have a skilled and well-coached team on the brink and questioning itself. It’s been beautiful, and leaves every Islanders fan wearing that familiar Trotzian smile.

“There’s a lot of trust in our game. We keep making subtle adjustments that help you take away some of the opportunities that they do great. We’re going to have our hands full as we have every game.”