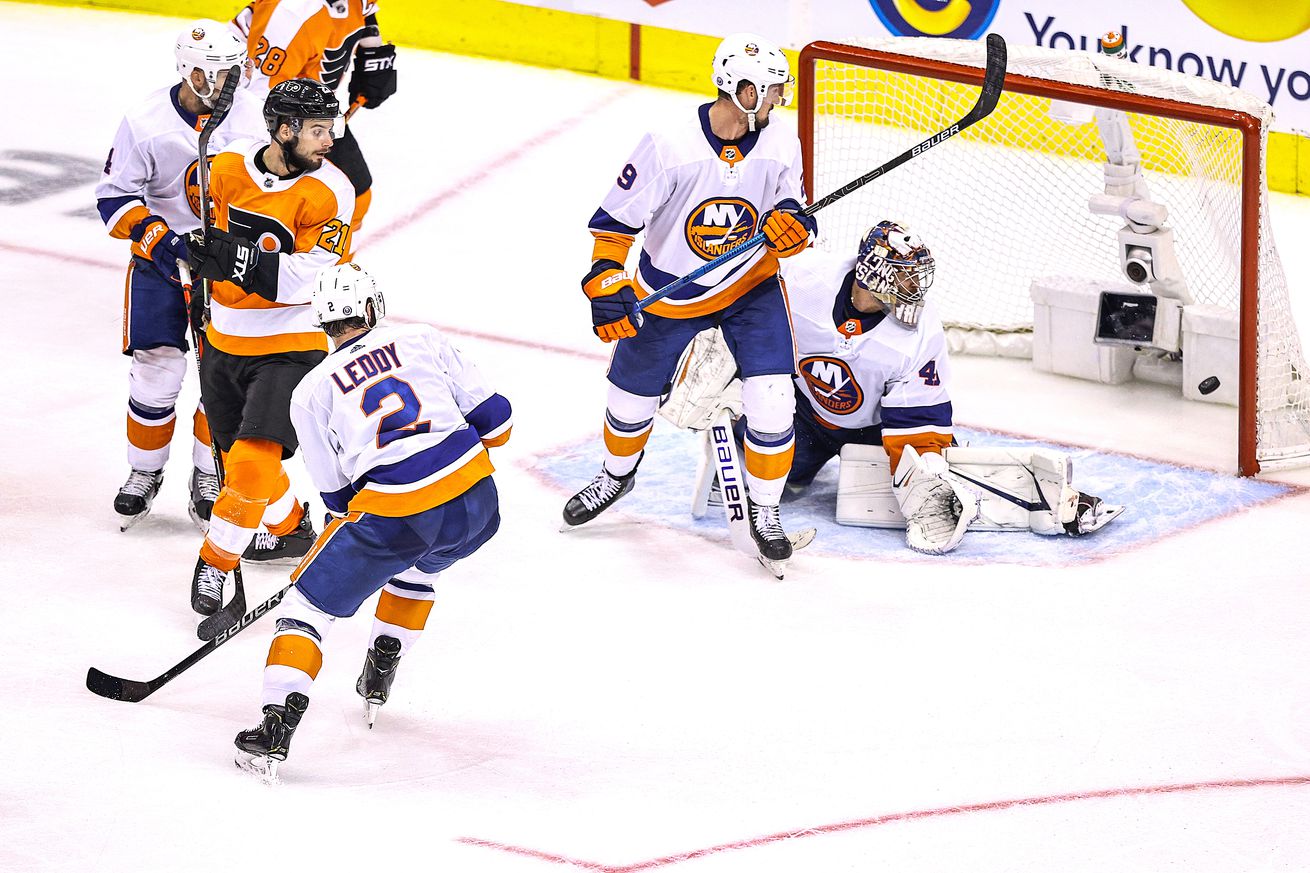 Frustrating result, but the Isles are still in the driver’s seat. | Photo by Elsa/Getty Images

Third straight series in which the Islanders failed to advance in their first try; they’ve done fairly well in their second attempts, though.

Tonight wasn’t the result the Islanders were looking for. It probably wasn’t the game they were looking for, either. But the fact remains that this resilient bunch forced overtime despite trailing by two in the third period yet again and that the only two games the Flyers have won in this series were overtime tip-ins after blowing multi-goal leads late.

Also, as I alluded to in the subhead, the Islanders have failed to close out a series in their first attempt each step of the way thus far. They have gone on to win their next attempts rather convincingly each previous time. (Although, they had the luxury of knowing a loss in their next attempt wouldn’t create a Game 7 situation, but I digress.) I’m not overly comfortable right now, but I’m not worried yet. Just… please close it out on Thursday!

The Flyers, facing elimination, had to come out of the gates… [clears throat] flying. Which is exactly what they did. They controlled play from the drop of the puck and really dominated the Islanders. But Semyon Varlamov was strong in his return from a day off on Sunday.

The Islanders had a couple dangerous chances in the first, the most notable of which was Carter Hart interrupting a Jean-Gabriel Pageau deke that surely would have led to a goal off a 3-on-2. But Philadelphia controlled the puck for most of the frame. It seemed as though the Islanders slowly started changing the tides as time passed, however.

Second Period: Those Are the Breaks

The Isles started the second period on the power play and strongly, seemingly continuing the shift in control that started toward the end of the previous session, leading to an early second period goal.

Derek Grant tripped Leo Komarov in the neutral zone with less than half a minute remaining in the first. The power play that continued into the beginning of the second was a strong one, but the Isles needed nearly the duration of the man advantage to score. They pressed the whole time but weren’t able to score on their first chances.

Mathew Barzal led the way on a 3-on-2 zone entry with Jordan Eberle and Josh Bailey. Bailey took the initial shot and Eberle nearly scored on the rebound. The puck ended up behind the net and Bailey retrieved it, stuffing it past Carter Hart on the opposite side of the initial shots. Alain Vigneault challenged for goaltender interference, as there was definitely some contact with Hart and Barzal was in the crease, but it was unsuccessful.

(Update: Barzal was credited with the goal. Not sure where he got a piece of it, but hey, it counts.)

But that seemed to be the end of the Isles’ firepower in the second period. The Flyers turned it around and took the lead before the period was over. In so doing, a couple of their top six forwards that hadn’t scored throughout the tournament finally got on the board.

Philippe Myers’ point shot was deflected by Philadelphia captain Claude Giroux to tie the game and shortly thereafter, Adam Pelech pinched unwisely leading to a Flyer rush the other way that was finished off by James van Riemsdyk, who had been a healthy scratch throughout much of these playoffs despite his ability and his new contract.

The period ended with a 2-1 Islanders deficit. The officials reviewed a potential third Flyers goal not long after van Riemsdyk’s tally, but ultimately ruled no goal.

In Game 2, the Islanders mostly controlled play entering the third period trailing 3-1, even though they didn’t get the 3-2 goal until there was eight and a half minutes left. Here, in Game 5, it was much of the same—it just took them a little longer to get back on the board.

First, though, the Flyers extended their lead. A failed clear by Derick Brassard allowed Philly to work the puck out to the point for Matt Niskanen, who blasted the puck through Varlamov for his first of the postseason. Niskanen was Brassard’s man and he defended him meekly, if at all, after his turnover, so Brassard was the goat on that one. This is foreshadowing.

The Islanders didn’t come back firing the way you might hope, but they steadily built up pressure until they were in full control of where the puck was going. They had some really strong chances along the way that Hart managed to keep out of the net and it felt as though the heroics of Game 2 weren’t in the cards tonight. And to make matters worse, Giroux’s stick got under Barzal’s visor on a pass’ follow-through, drawing blood around the eye and knocking him out of the game. (More on that below.)

And then Hart gave up another goal he might like to have back. Brock Nelson’s wrister is deceptive, but the shot was from distance and Hart had a pretty good look at it.

Back to the toy department he goes pic.twitter.com/M5sNaXQnwa

Nevertheless, the puck went in between his shoulder and his head and you just had that feeling. There were less than five minutes remaining at this point, so less time than the last comeback, but you just knew.

Just about a minute and a half later, the Islanders tied the game. As you knew they would. Brassard took a shift with Cal Clutterbuck and Casey Cizikas. Clutterbuck carried the puck and cycled around in the corner with Cizikas, winning the one-on-one battle and driving toward the net. Unable to get a shot off, he instead backhanded a pass across the crease to Brassard, who had sneaked away from Robert Hagg into open space down low for the tap-in.

This game paralleled Game 2 in a lot of ways, and overtime was no different. Well, okay, it was a little different.

In Game 2, the Flyers pretty much walked all over the Isles and won the game two or three minutes in. Tonight, it was the Islanders that controlled play in overtime, registering I think the first seven shots of the period. They were assessed a penalty—Matt Martin for tripping—but they killed it off.

As you might imagine, Philadelphia won shortly after that. It was eerily similar to the Game 2 overtime goal. Nick Leddy panicked and fired the puck down the ice, setting up the Flyers for an offensive zone face-off with fresh skaters and a favorable match-up against tired Islanders. And, just like last Wednesday afternoon, a Flyers defenseman fired the puck from the point and it was tipped along the way. Ivan Provorov took the shot and Scott Laughton got the tip to force Game 6.

Barzal’s injury occurred late in the third and he was not back on the bench at any point during overtime. Understandably, a major concern. And Barry Trotz had no update for him. But David Pagnotta, perhaps, does.

Early indications are Mat Barzal’s doing well; no issue with his eye.

I’d feel a lot better about Thursday night if Barzal was in the lineup, so here’s hoping this is accurate. Always scary when someone gets cut around the eye, but in the hockey eye injuries I’ve seen in the past, the player seems to be in an immense amount of pain, yelping and often writhing.

Barzal winced and went down after the contact, because I’m sure it hurts to get cut under your visor and near your eye by a hockey stick traveling quickly, but he wasn’t screaming like he couldn’t see or that his eye was falling out. I’m speculating, I know, but between what we all saw and Pagnotta’s report, I feel a bit better about the damage. I hope I’m not jinxing it. [Knocks rabbit’s foot on wood]

Speaking of an injury to a team’s most important center (stretching this transition, I know), Sean Couturier collided awkwardly with Barzal toward the end of the second period and labored getting off the ice. He did not return at any point and Flyers coach did not have an update for him.

This series isn’t over yet, folks. Hopefully, it will be after Thursday night. The Islanders will be the designated home team in Game 6.

No official start time announced yet because they were probably waiting to see if the Golden Knights and Canucks required a sixth game—since they do, I’m guessing Isles-Flyers starts at 7:00 p.m. EDT and Vegas and Vancouver drop the puck at 9:45 p.m. EDT, just like tonight.

Update: My extremely difficult-to-think-of-myself hunch was correct. Isles-Flyers at 7:00 p.m. EDT on Thursday.

#Isles – #Flyers Game 6 is at 7 p.m. on Thursday with Canucks staving off elimination vs. Vegas. Vegas-Vancouver is at 9:45 pm on Thursday.