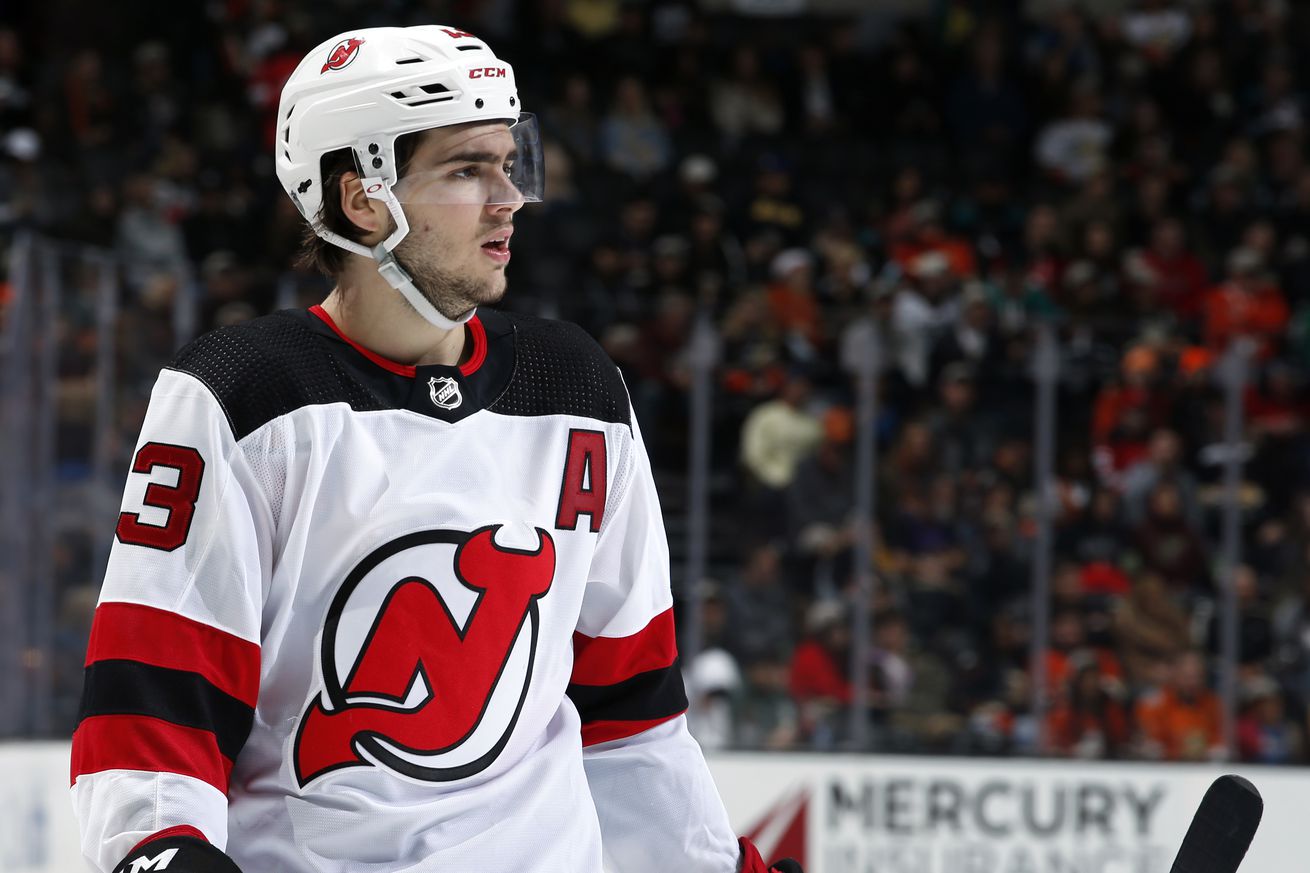 Nico Hischier topped the list last year. Will he do it again? Who will join him in the 2020 Top 25 list? | Photo by Debora Robinson/NHLI via Getty Images

After drafting eight players last week, the New Jersey Devils now have 52 players in the organization under the age of 25. This means the ninth annual All About the Jersey Top 25 Under 25 list is the biggest one yet. Read on to see who is available and how you can vote in your rankings as part of the final list.

Since 2012, we have put together a list of the Top 25 New Jersey Devils players Under the age of 25. It is an exercise of perception as well as to raise awareness of how young the franchise is, who is in the team’s near-future, and the depth of the team’s prospect pool. Since 2013, we opened up this list to you, the People Who Matter, to have your say about the younger players in the organization. It is an exercise in perception and I believe in the wisdom of crowds to understand who’s future is really looking bright.

I understand that we are doing this year’s list later than usual. This year has been very different as the global Coronavirus pandemic has thrown a lot of things off its normal path. Normally, the NHL Draft is held near the end of June, free agency would begin in July, and an exercise like this one helps fill the time during a long offseason until training camp and preseason resume in September. The first two events were pushed back to early October, the NHL is targeting – not guaranteeing – a January 1, 2021 date to start the 2020-21 season, and we do not know when exactly training camp or preseason will begin. However, with eight new prospects being selected by the Devils, now is a good time as any to make this list. This is the ninth annual All About the Jersey Top 25 Under 25. Let us learn who joins it, who left it, and who you can choose for this year’s list. I can already tell you, this will be the biggest Top 25 Devils Under 25 List so far.

The Requirements & The Plan

This list contains all players in the New Jersey Devils organization as of October 11. As long as the team holds the player’s rights or the player is under contract, they are added to this list. This includes qualified restricted free agents who need a new contract for 2020-21. Anyone signed or traded since then will not be added or removed from the list. The only other requirement is that they are under the age of 25 as of October 8. The ages were calculated then; no one turned 25 in the last three days.

Due to those requirements, the 2020 list will be the biggest one yet. There are 52 players in the Devils’ organization who are under the age of 25. Next year’s list could top that as there are only three players who will turn 25 in this coming season.

As with past years, the list will be determined by the rankings of the All About the Jersey writers and the results of the community survey. The People Who Matter will collectively have a say in this year’s list as with the past eight. All rankings will be weighed equally, averaged, and then that will determine the order of the list. I will be posting up the results in reverse order, starting with the big list of players who did not make the top 25 and then revealing the list by every five spots in following weeks.

Nico Hischier took the top spot, finishing ahead of Jack Hughes – who was drafted first overall in 2019. Those two owned the top two spots between the writers and the community. The remainder of the top ten was a bit more varied in votes. The final top ten were, in order, Hischier, Hughes, Will Butcher, Jesper Bratt, Ty Smith, Mackenzie Blackwood, Pavel Zacha, Miles Wood, Jesper Boqvist, and Joey Anderson. Needless to say, there will be a different looking top ten for this year.

The Devils were really bad in 2019-20 and therefore traded veteran talents for younger players and draft picks. General Manager Tom Fitzgerald kept most of those picks and the younger players acquired are under the team’s control. As a result, there are fourteen new players who will make their debut on the AAtJ Top 25 Devils Under 25 List:

The biggest name on this list will be the team’s seventh overall pick in 2020, Alexander Holtz. I am very curious as to see where he will end up on the list compared with other young players. In the past, the incoming draft class generally rates low on the Top 25 Under 25 list as they are brand new to the organization and often 18 years old. With two overagers and three first round picks, we could see more representation of the 2020 draft class on the Top 25 compared with past draft classes. There are a few players here that I think fans have a reasonable hope of making the New Jersey roster at some point in 2020-21 or a little later. Those would include Janne Kuokkanen, Nick Merkley (who did make a call up last season), Kevin Bahl, and Nolan Foote. Whether or not they will get a shot is up to New Jersey and up to them.

While the Devils have brought in more young talent, there are plenty of past mainstays who will not be on this year’s list for one reason or another. These nine will not appear on the 2020 Top 25 Devils Under 25 list:

Thankfully, I decided to wait until yesterday to compile this as I can include the now-Maple Leaf Joey Anderson on this list. He was traded on Saturday night to Toronto for Andreas Johnsson. Anderson joins Blake Speers as the only departing player to be dealt away. Both of them would have been on this list if it was not for those deals. Miles Wood and Will Butcher would not be as they are now 25. Their departure from the list by age means we will have at least two new players in the top ten for 2020.

As the Devils have a lot of young players in their system – again, this year’s list has 52 players – there were some the team just let go. New Jersey opted to not sign Mitchell Hoelscher and Xavier Bernard when their draft rights expired back in June. The team did not qualify Brandon Baddock, John Hayden and Mirco Mueller, who were all going to be too old for the list regardless. This means that we will also have a new player finishing last on the list for the first time since 2016. As of this writing, only Mueller is unsigned among those three, which I find strange.

Here is the full list of all Devils under the age of 25, their current contract status, their age as of October 8, and their ranking in the 2019 Top 25 Devils Under 25 list. This is in alphabetical order by first name:

With this table, you should be able to highlight the whole thing and copy it into something like Excel or OpenOffice Calc. This way if you want to play around with the order before making your vote in this year’s community poll, then it should be a little easier than before to do that.

As with past years, I have set up a survey for all of you to rank all of the players. Here is the link to rank all 52 players. You can drag and drop names in order, or you can select the ranking numbers for each person. Be sure to rank all of the players so this way you do not end up with somebody on the fringe of this list like, say, David Quenneville in your top ten. (Sorry, David Quenneville.) Once you rank all 52 players, hit “Done,” and your response will be submitted.

The survey will be open until Friday, October 23, 2020 at 7 PM ET. This should give everyone ample time to think about the list for a bit and fill it out. I will collect the responses after it is closed, determine the final rankings with the writers’ lists, and then post the list of players who did not make the Top 25 on Monday, October 26, 2020. That is the current plan, which are subject to change but I will try to achieve as planned.

Now that you know who is eligible for this year’s Top 25 Under 25 list, I want your initial take on them. Please give your opinion on these players in the comments below. What is your ranking strategy? How would you balance professional experience with raw potential? Thank you for reading and participating in this year’s survey. Have fun ranking these players. I look forward to see how the community sees the Devils’ youth in the organization ahead of next season.