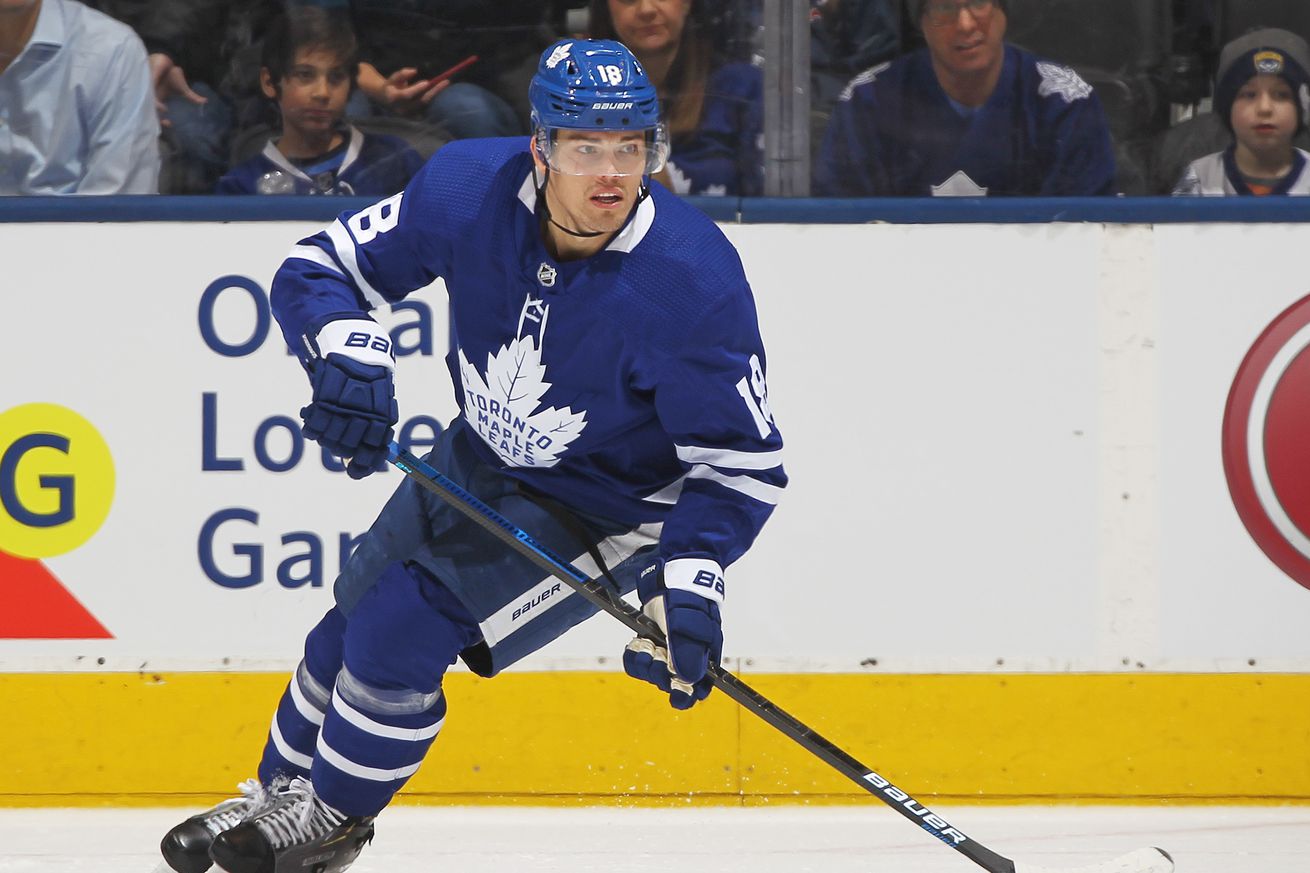 This evening, the New Jersey Devils traded prospect right winger Joey Anderson to the Toronto Maple Leafs for left winger Andreas Johnsson. This post is a reaction to the trade, explains how Johnsson was used in Toronto and how useful he can be, and why it is a good deal for the Devils.

This evening, and thankfully before 9 PM or 11 PM, the New Jersey Devils made another trade in this offseason. The Devils sent right winger Joey Anderson to the Toronto Maple Leafs for left winger Andreas Johnsson. That is the deal; a straight player-for-player swap. As indicated by the announcement at the Devils’ official website, Johnsson is signed for the next three seasons with a cap hit of $3.4 million. As for Anderson, he was a restricted free agent so the Maple Leafs will now need to negotiate terms with him for 2020-21.

At first glance, this is an upgrade of a trade for the Devils. The 22-year old Anderson has had some extended looks at the NHL level. It seemed more apparent for this coming season that he could seriously contend for a regular spot at right wing in New Jersey. The 25-year old Johnsson has been a regular for Toronto for the last two seasons with a combined 116 games played with 28 goals and 36 assists. Getting a NHL player in exchange for a prospective one is an immediate upgrade.

In a second glance, it absolutely is an upgrade for the Devils. Johnsson has done quite well in his short time in Toronto. The Athletic’s Dom Luszczyszyn put up a snapshot of Johnsson and his projected career path in his model. It shows that Johnsson has been quite good. He also thinks Toronto did not get a whole lot in return.

Devils get a pretty useful player in Andreas Johnsson ($3.4M x 3 years remaining) and don’t spend much to get him. Pretty underwhelming return for Toronto. pic.twitter.com/bH6i8WAf1K

Johnsson can also play a role on a power play. Last season, per NHL.com, Johnsson did average 2:01 per game on the man advantage in addition to 13:31 per game at even strength. Even though the results were not always there, Toronto’s power play process was very good when Johnsson was on the ice. According to Natural Stat Trick, Johnsson had the best CF/60 rate among Leaf forwards with 112.1, the third best SF/60 rate among Leaf forwards with 58.4, and the second best expected goals rate among Leaf forwards with 7.48. Given that Toronto’s power play was led by Matthews, Tavares, Marner, and Nylander, I do not think Johnsson was solely responsible for their offensive pressure. I do think it is fair to say that Johnsson contributed quite well to a Toronto power play, he was not just a guy thrown on the ice for the sake of it. What that means is that he could be an option to play on a power play unit in New Jersey if Lindy Ruff and Mark Recchi think well enough of his skillset.

The fact that Johnsson is a left winger is a big help. As CJ wrote this morning, the Devils needed a scoring forward and a two-way forward. Johnsson can fit in these roles to a degree given that he often helped make good things happen for Toronto when he was on the ice. I would pencil in Johnsson to be the team’s second line left winger behind Nikita Gusev. His arrival means Miles Wood does not have to play higher up in the lineup. His arrival means the Devils do not have throw a prospective winger from Binghamton or elsewhere in their pool and hope he can swim in the NHL right away. This trade meets a positional need in addition to a performance need.

What strikes me is that all it took was Joey Anderson. You would think they would ask for a little more for Johnsson’s quality. I do think this was effectively a cap dump by Toronto. They were willing to take on a pending restricted free agent who spent more time in the AHL than the NHL ever since signing out of college. I like Anderson’s future in the NHL but he is not going to command a lot of money right now. That probably made him more attractive to Toronto than a player under contract. This move also clears up a growing issue with the Devils: they have a lot of young players in their system. There are more players then there are spots. It would do well for the Devils to move on from players that they are not confident will have a long term future. I would like to think Anderson would have had a real shot at making the Devils’ roster, but he is far from the only right winger in the system to have a shot. Jesper Boqvist (he can play all three forward positions), Nathan Bastian, Marian Studenic, and Fabian Zetterlund – your time to shine is soon. Especially with Alexander Holtz in the distance. Going back to this deal, the Devils did not give up a lot here and I write that as a someone looking forward to hope Anderson can take the next step in his career.

As the Devils have loads of cap space, they can easily afford to take on Johnsson’s contract. The acquisition puts the Devils over the cap floor, which was never really in doubt as the next deals for Jesper Bratt and Mackenzie Blackwood alone would have put them over. There is one quirk in Johnsson’s contract that I hope Tom Fitzgerald is aware of. According to CapFriendly, Johnsson will have a modified no-trade clause in the final season of his current deal in 2022-23. If he needs to be moved out, then it would be beneficial to do that before that clause kicks in. Given that the last two seasons in his deal has a higher signing bonus than a base salary, then it that may be easy to do. However, Johnsson performing as a solid contributor will likely ensure he stays in Newark for the next three seasons.

While I’m sorry to see Anderson go, I am happy that Johnsson is coming to New Jersey. I like this trade a lot. I think he will be a useful player. He fits a need in the lineup. The Devils can afford him now and through the remainder of his contract. They did not lose a lot to bring him in. The only thing I am still scratching my head over is why he is known as Mango, but at least it is not a lame “nickname” that is just his initials or a shortening of one of his names like AJ or Johnssony or Johnss. But that is not relevant to the trade or what he can do for the Devils. Again, I think Fitzgerald did really well with this deal and I hope he continues to address the current needs of the roster I wish Johnsson the best as he joins the Devils organization.

Now that you know what I think of the trade, I want to know what you think. For what it is worth, the Leafs fans are not so jazzed about the deal – which is another positive sign for NJ. Do you like this trade? What do you expect Johnsson to do as a Devil next season? Will the Devils miss Joey Anderson? Do you think Fitzgerald will make more moves as the offseason goes on? Please leave your answers and other thoughts about this trade in the comments. Thank you for reading.