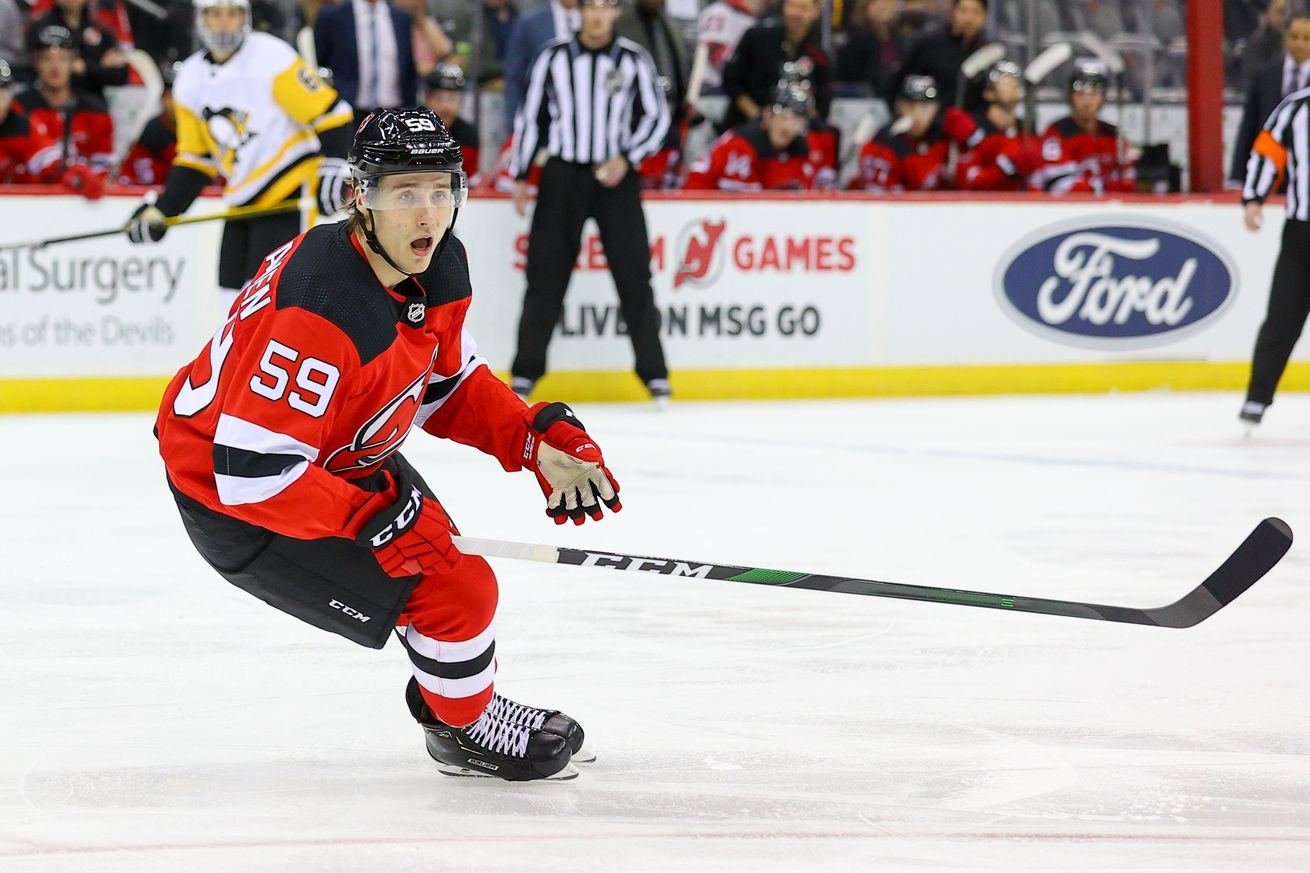 Janne Kuokkanen was an AHL revelation and eventual NHL-promotee after being acquired in the Vatanen trade. Can he resume his ascent this year, or is he doomed for another year on the NHL fringe.

When the Devils emptied the pantry of all tradable assets in 2020, one of the players towards the top of the list — and, in this writers opinion, the top of the list — was Sami Vatanen. His market value was much higher than his actual value and getting something for nothing was an obvious choice for a team not ready to compete.

Then-interim GM, Tom Fitzgerald, ended up recouping quite a bit of value. He acquired a slightly underrated NHL defender in Frederik Claesson; a conditional pick that ended up being a 2020 3rd rounder when the Hurricanes beat Our Hated Rivals and played Sami in 70% of their playoff series; and one of the Hurricanes top 5 prospects in, forward, Janne Kuokkanen.

Kuokkanen had beaten up the lower leagues in Finland as a prospect and even registered 4 points in 2 games with the adults in Mestis and Liiga. This performance earned him a selection in the 2nd round of the 2016 entry draft. Since then, he came over to North America, starting in the OHL before moving to the AHL — playing sparingly in the NHL along the way. What’s most encouraging about the progression for the 22-year-old, is that, according to my NNHLe figures he’s improved his NHL-equivalent production each year — peaking at a 29-point pace last year.

Byron Bader’s model is a little more generous to janne, giving him NHLes of 18, 25, 32, and 38. For some context, even my more conservative NHLe puts him on par with the 82-game paces for Travis Zajac (29.7) and Jack Hughes (28.2) and Miles Wood (27.7) — not to mention beyond that of Rooney (15.1), Hayden (7.6), and Boqvist (9.4). In fact, among the returning forwards on this Devils roster, only 6 (Palmieri, Gusev, Hischier, Bratt, Zacha, Zajac) produced at a higher equivalent rate than Kuokkanen. Furthermore, what limited information we have on him indicates that his impact is not limited to his point production. Kuokkanen’s even-strength GF%Rel was +9.1% — good for 21st out of the 193 AHL forwards to play 40+ games in 2020 — which means that his teams did score a 9% larger share of the goals with him on the ice than without.

Will this be enough to finally earn a regular spot on an NHL roster? Well he certainly turned some heads by putting up 6 points in just 4 games with the Binghamton squad. Of the non-regulars, he has to be considered one of the favorite to appear in 40+ games. He’s played both center and winger, but has yet to take a faceoff in his 12 NHL games and the Devils are more set down the middle so it seems safe to say he’s a left winger.

The Devils entered 2019-20 with a pretty good left side. Hall was an undisputed top-liner, it was rumored that newly acquired Nikita Gusev would be used on the left, Bratt was a potential top six forward, Coleman was a dependable 200-ft player that could plug in anywhere in the middle six (or higher), and Miles Wood was a physically versatile 4th line sparkplug. It was determined that Gusev would be more effective on the right side at 5v5, and after Coleman and Hall were both traded, Nasreddine used Bratt and Wood in the top 6 at time, as well as Jack Hughes who was moved to the wing for the last few contests. Because of the messiness of the roster, I think determining Kuokkanen’s place in the lineup would be better served by just counting forwards.

In descending order, I think that Hischier, Palmieri, Zajac, Gusev, Bratt, and Hughes are the locks. They may not be literally the “top 6” (Hughes, Zajac, Hischier are all Cs), but they’re essentially that. The next 2 that are still clearly over the rest of the crop would be Wood and Zacha. They both have over 250 NHL games to their name already and, while not spectacular, have been sporadically useful — more than we can say for the next crop.

With 4 forward spots left, that brings us to Kuokkanen’s tier. I’ll list how many NHL games each player has appeared in parenthetically when mentioned. John Hayden (144) and Kevin Rooney (91) are the closest things to “NHLers” among the remaining options, but are both on expired contracts and may be let go to pave the way for prospects. Seney (53) and Anderson (52) have each put up 13 NHL points and seem like they’re towards the top of the list of remaining forwards to me. After that, you’ve got talented prospects that haven’t shown us NHL-level play yet, but management would love to see it — Michael McLeod (33) and Jesper Boqvist (35). I think Boqvist, given how much he played last year, may be even above Seney and Anderson in the pecking order, and McLeod and his newly rounded out game could slide into a bottom six role. I think, leading the crop of “would have to win the spot” players like Maltsev, Studenic, Zetterlund, and Bastian is Nick Merkley (5) who not only impressed in the Bing, but put up 2 points in 5 games in the NHL. The “wildcards” are Nolan Foote who was a point-per-game player in the WHL but has yet to play and pro hockey, whomever the Devils select at 7th overall (or 18th or 20th for that matter), and any acquisitions we may make in either free agency or through trades.

I think they really want Boqvist in the lineup — as evidenced by his usage last season. That leaves 3 spots. I think that at LEAST one spot will be occupied by the wilcard group — most likely the “acquisition” subgroup. Of the remaining contenders, McLeod and Anderson seem to have the biggest chances at making it so Kuokkanen will need to demonstrate more value than one or both of them. At this point, there are only 3 right-handed forwards on the roster, and one (Zajac) is a center. McLeod is a righty who can also play center, and Anderson is a righty that can penalty kill. Kuokkanen is slightly more likely to be an NHLer in general, though. I think the versatility gives the righties the “tiebreaker” advantage over Janne, but if Kuokkanen can prove that the 5v5 skill level gap between him and his competition is sufficiently large, none of that will matter and he will get an extended chance at proving he’s part of this team’s future.

To answer the titular question, I think that Kuokkanen is probably somewhere around the 11th-13th forward, but that means that, between inuries and underperformances elsewhere in the lineup, he will likely play a significant amount of games. Whether you consider him a “regular” is probably dependent on the circumstances in which he attains his position, but I do think he’ll play over 50% of available games.

What do you guys think? Do you want him to play? Do you think he will? What do you think his peak is? Which forwards do you definitely want/not want to see played over him? Leave your thoughts in the comments below, and as always, thanks for reading!