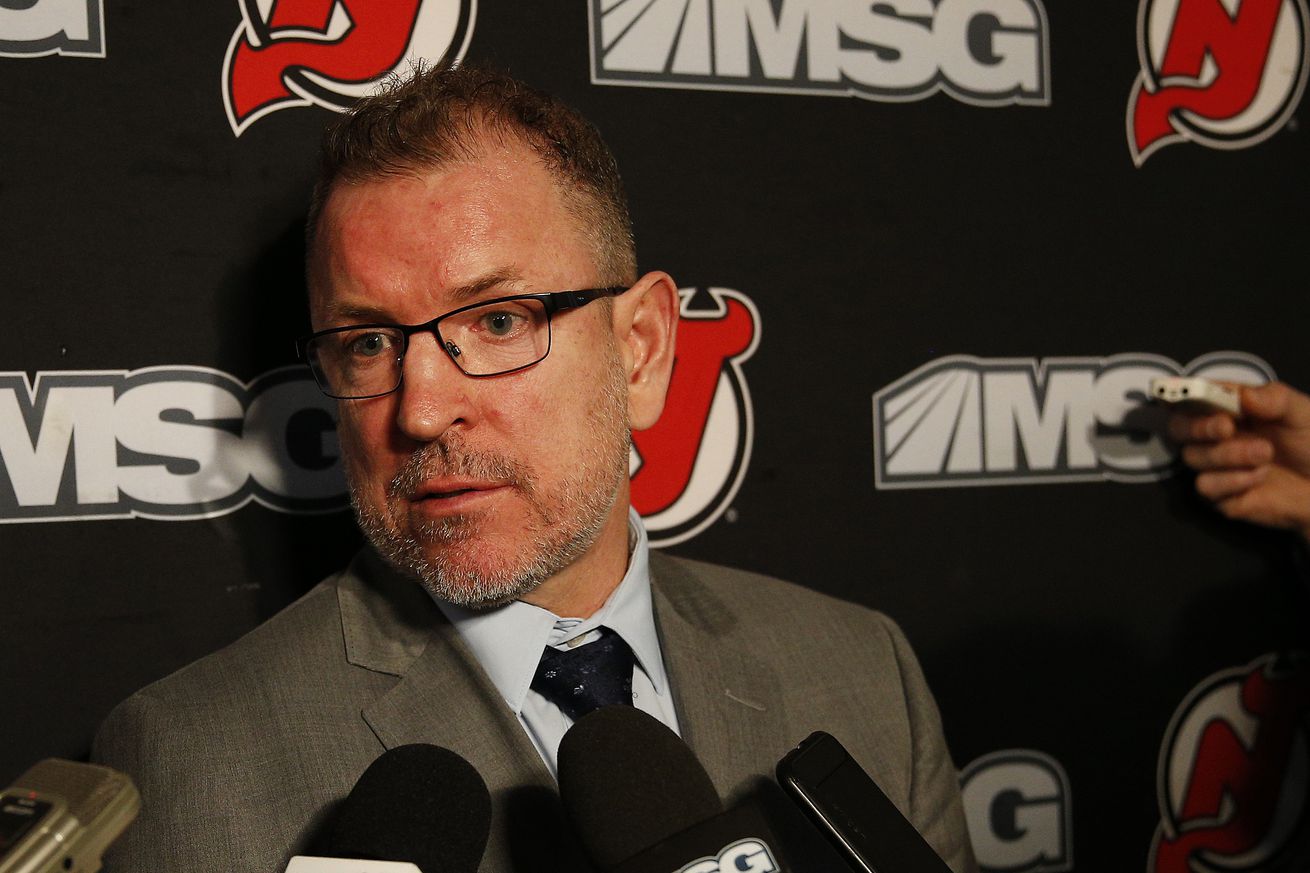 As the official new GM, Fitzgerald had a lot of options about how he wanted to attack the draft and free agency. From what I have seen, regardless of what you feel about the players he drafted or signed, he has gone about it the right way so far.

When bringing on a new GM, there is always some worry that they will want to make a big splash, show that they can turn a team around quickly. GMs are usually given more leeway and a longer timeframe than head coaches, but if they take over a team and it is still bad in a few years, there is no doubt that a firing could be in the works. Because of this, some will want to spend to the cap, utilize all of the money they can to make their team competitive as quickly as possible, and often before that team is ready.

Tom Fitzgerald, officially in the position instead of holding the “Acting” tag for the New Jersey Devils, is not falling into that trap, and that is a huge relief. What he did between the draft and free agent frenzy this year is the proof that he is in it to make this team better for the long haul, not just as quickly as possible. He obviously was given a vote of confidence from the owners, and instead of feeling a pressure to win now, he is doing what he can to make the team competitive for a long time, even if that comes at the expense of the team’s production this upcoming season. Let’s look at why.

1. He Used the Picks He Had

The biggest sign that Fitzgerald would have been in it to win now instead of over the long term would have been if he had traded one or more of the team’s first round picks for current or especially older NHL players. This has been something that has happened on multiple occasions in Devils’ history, and it was something that Lou Lamoriello was fairly fond of doing. The last time this occurred was in 2013, the draft that took place at The Rock, when Lou traded the 9th overall pick for Cory Schneider. At the time, it helped the team drastically, as there was no successor in place for Martin Brodeur, who was no longer the top notch goaltender he once was, producing only around a .905 save percentage. Schneider would have a couple of all-star seasons in the red and black, and was a quality player.

However, with that pick, Vancouver took Bo Horvat. For those direct years after the trade, it was better for the Devils, but ever since about 2018, that has flipped. Now, Schneider is bought out, and Horvat has been a really good player for Vancouver, with 10 goals and 2 assists during the bubble playoffs alone. While Schneider was helpful at the time, how great would it be to have Horvat on New Jersey now? Especially knowing as we do now, that even though Schneider was a good player for a few years, he did not help lead the team into any deep playoff runs at all, and actually, the one time the team did make the playoffs with Schneider, down the stretch he wasn’t playing regularly, Keith Kinkaid was.

That is the pitfall of trading picks, especially first round picks, for current players. It helps create short term success, but usually at the cost of long term sustainability, especially if the player traded for is north of 30. Fitzgerald, thankfully, did not do so. He stayed put at 7, 18, and 20, taking players at each spot. The hope, of course, is that all three picks hit, but even if only two of them hit and become NHL regulars, that will help create massive sustainability for this franchise. When paired along with young stars in Nico Hischier and Jack Hughes, and hopefully MacKenzie Blackwood, more young players who will be around for a long time creates a core of players which will lead to playoff contention year in and year out. Fitzgerald did not do the right thing for winning immediately, as this team will probably not be good in 2020-21, but he did the right thing for the long term health of the Devils, and that is awesome.

Even after doing the right thing at the draft, there was a chance he still could have turned into win now mode by spending extravagantly in free agency. There were some really expensive players on the market in the free agent frenzy, and the Devils had a ton of cap room. Even today, after the frenzy, the team still has over $18 million in cap room. If they wanted Alex Pietrangelo? They could’ve gone all out and spent more than Vegas did, and Vegas gave him $8.8 million a year through 2027. Even with that contract on NJ’s books, it still would’ve given them plenty of cap room, even after a monster signing like that.

Of course, the problem there is that in free agent deals like that, usually the last few years are tough to take. The player is still in their prime for the first couple of seasons, but then their game starts to deteriorate as they age, and by the end of the deal, the contract becomes an albatross for the team. That could become true with Pietrangelo, who is 30 right now. Will he be worth the $8.8 million cap hit when he is 36 and 37? Perhaps not. Right now, Zach Parise is already 36, but Minnesota has to eat his $7.5 million cap hit for another five seasons. Is he worth that now? Not really. That contract is now an albatross for Minnesota, and will become an even bigger one as he continues to age.

Fitzgerald, smartly, did not partake in that. Those contracts are for teams that feel they can win now and are willing to deal with future repercussions later if it means a Stanley Cup in the near term. The Devils are not winning a Cup in the near term, so there was no reason to do this. In fact, it would have been counterproductive to the long term goal of playoff sustainability. Vegas is ready to win now, and really could have this past season. For them, adding Pietrangelo and his contract now could be worth it. Not so in New Jersey.

Instead, Fitzgerald made relatively small moves. The biggest one was signing Corey Crawford to two years with a $3.9 million cap hit. It was a short term deal, one that will greatly help MacKenzie Blackwood as he grows into his #1 role, and also makes the team a lot more competitive in the short term by providing quality goaltending each and every night regardless of which goaltender is in net. It was the perfect type of deal for where this team is right now. It doesn’t hurt the team in the long term, and actually helps in the short term. Win-win.

The same can be said with the trade to bring in Andreas Johnsson. In that trade, the Devils get a 25 year old under contract for three more seasons at a reasonable cap hit of $3.4 million, which does not hurt the long term future of the team. At 25, his skills are not deteriorating due to age, and in fact there is a chance he could still be getting better, much like Blake Coleman was still vastly improving in his mid-20s. And beyond that, it improves the team in the near term, giving core players like Jack Hughes a higher quality of teammate. In this way, much like with the Crawford trade, this trade can actually improve the long term prospects of the team by improving the core players. Crawford can help Blackwood get better, and Johnsson can help some forwards like Hughes or perhaps Pavel Zacha get better.

In the end, that makes the moves that Fitzgerald made in the draft and free agency the right ones. In the draft, he did not trade picks, did not give away future prospects for guys that can win now but not later. He drafted guys to help this team long term. That’s a win. The free agent moves actually help the team now, and they also could improve the players on this team who will be here for the long term. But cap-wise, they do not cost this team in the future. Win-win-win. They were not flashy deals, they were not overly news-worthy deals. But most importantly, they were the right deals. Fitzgerald did not go crazy to win now, he did what was needed to grow this team long term and do it the right way. I’m not sure how many new GMs (I know he was interim for a little while there, but for the sake of argument let’s say new) would have been as disciplined and controlled with their handling of a draft and free agency like Fitz was. In my opinion, that is a mark in his favor.