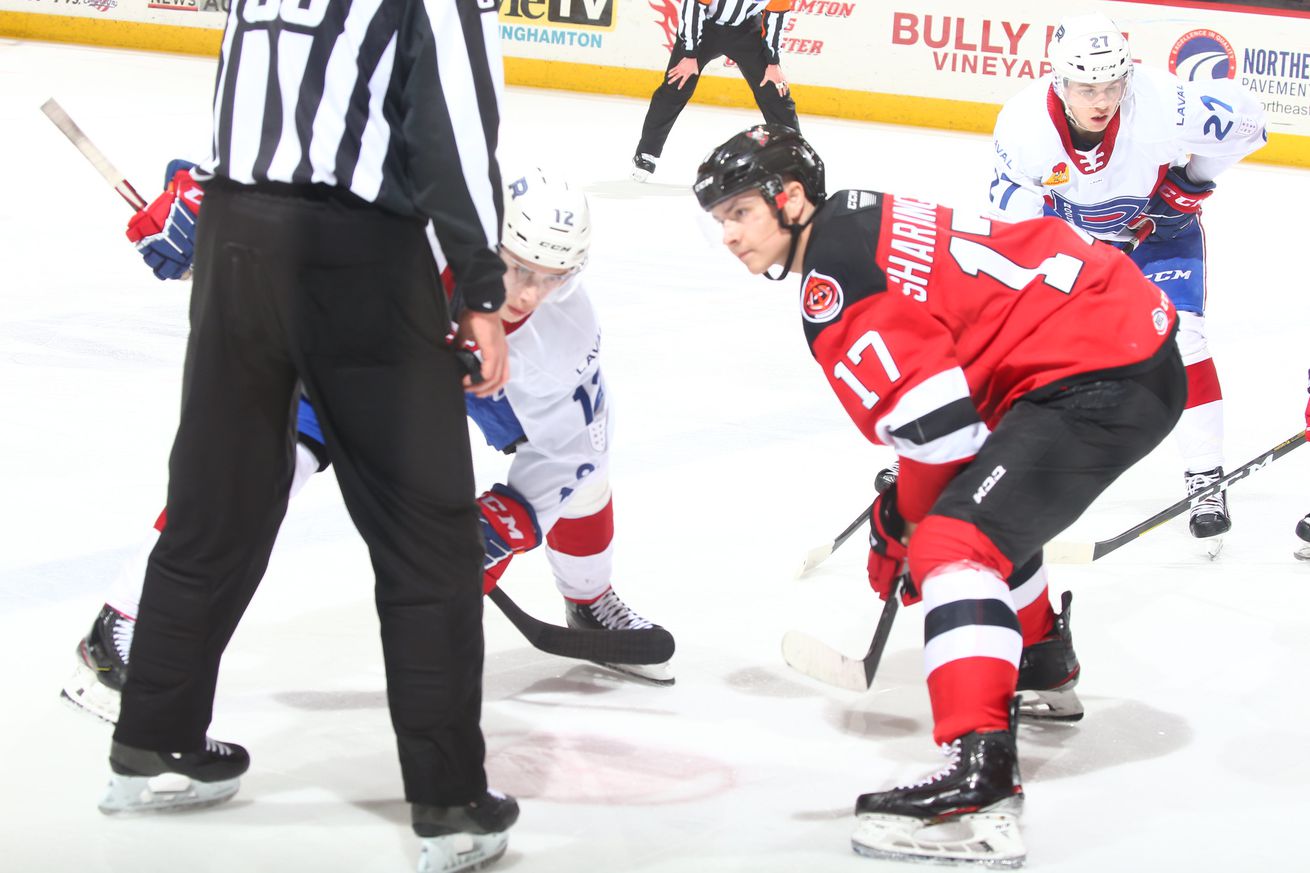 Forward Egor Sharangovich, the young underdog to lead the Binghamton Devils heading into 2020-’21 as the debut of the Profile Series comes to fruition

Confidence ~ con·​fi·​dence noun: a. A feeling or consciousness of one’s powers or of reliance on one’s circumstances: b. faith or belief that one will act in a right, proper, or effective way. ~ Merriam-Webster.com

Confident. Let’s also add power and excitement to the equation.

This trio of words comes to mind when asked about Binghamton Devils’ forward Egor Sharangovich’s most recent progress after two seasons in the AHL. I believe this year coming up will be a monstrous one for not only the BDevils but as well as multiple players with Sharangovich near the top of the list as I kick off the Profile Series of 2020-’21.

The 22-year-old has the speed while reading plays with or without the puck anticipating how the defense reacts. Toughness in the corner areas, as the potential is there filling in as a reliable winger with the ability to play center effectively.

Sharangovich last drafted in the 5th round (#141 overall) by the New Jersey Devils in 2018 and is currently on loan set to participate for the Dinamo Minsk of the KHL. His season will begin shortly as New Jersey has allowed him to continue to develop until the AHL is ready to re-open in December. No stranger to the KHL, as Egor last participated for the Minsk back in 2017-’18 and ended up with 4 goals and 8 assists in 47 games as a 19-year-old.

In his rookie season, Sharangovich had 9 goals, 8 assists in 68 games as the team floundered in last place in the league. In 2019-’20, things improved, as well as Egor’s production for 10 goals and 15 helpers in 57 contests before the shutdown as the team was on a roll eating up opponents on a nightly basis before earning a playoff spot. During that period, Sharangovich was more visible as he became increasingly aware of his ice time while improving his fore-checking.

The 6’2”, 205 lbs power forward, was mostly used at center for Chris Conner and recently acquired Janne Kuokkanen, also on the wing with Marion Studenic and Ryan Schmelzer at the center position as he intertwined power within the line-up at ease. A native of Minsk, Belarus, is approaching his last of a 3-year ELC contract signed on July 17, 2018, and is an RFA.

Under this review of Sharangovich from a member of The Panel, as Duncan Field had this to say in the 3rd Quarter during his rookie campaign;

Throughout the year we have seen glimpses of his potential through plays that emphasize his size, skill close to the net, and aggressiveness. I’ve enjoyed watching him adjust to the North American game, and while his ideal trajectory would have seen him settle into a middle six role in his first pro year, consistency in role, deployment, and line mates will do him good as the season plays out. One thing that I love seeing, that speaks to his talent, is when a power forward can play his game cleanly. Despite his slow production so far, I believe that he will take a middle six role as soon as next season. @DuncanMRF

And this came from the 2019-’20 season, a year later for the BDevils with 3rd Quarter results in his second season also from Duncan;

Sharangovich is another player whose role has continually shifted throughout the season, especially as Binghamton’s roster has morphed. Sharangovich really took on the challenge of producing during the third quarter, and doubled his point totals from the previous two quarters combined. Part of that is playing higher in the lineup in the absence of Anderson, Street, and others, but he has also been someone who has contributed goals and plays at key points in games. While he still needs to develop his physical play, he has risen to the challenge in recent weeks. Look for Sharangovich to take more of a key role on the AHL team next season as players such as Boqvist and Anderson move to take permanent roles in the NHL – I am more confident that he will be successful in the top-6 after this last quarter. @DuncanMRF

Also, to be noted, his linemate Marian Studenic will be extended for the upcoming season as he is on loan to the Slovan Bratislava of the Slovakia Tipsport Liga as well as Nick Merkley to the Ässät of the Liiga.

A couple of his excited highlights fulfilled with emotions;

As I mentioned earlier, this should be a big deal looking ahead to the 2020-’21 schedule as Binghamton was on a roll (25-7) before the shutdown gathering up points left and right while moving up the ladder in the North Division. With nearly three-quarters of the club returning, including the coaching staff, the BDevils should be able to pick right back up from where they left off after the closure of the AHL in mid-March.

And, I am counting on Egor Sharangovich to be right there in the thick of things, hitting his stride and feeling confident playing for the Binghamton Devils when it all finally comes together at the start of early December.

Up Next: Another Profile Series piece this time featuring forward Mikhail Maltsev following his rookie campaign for Binghamton.