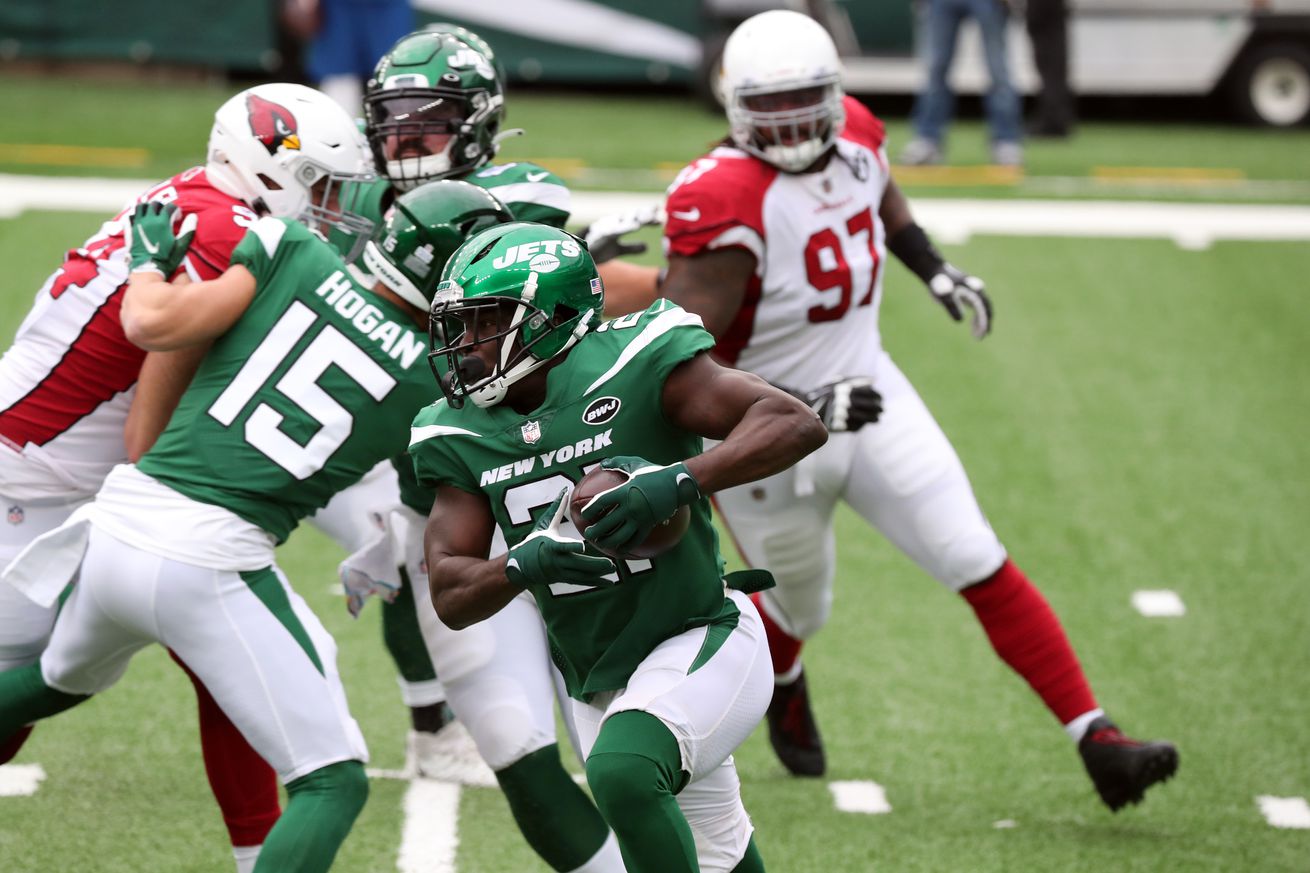 Back on December 9th, 2018, Elijah McGuire’s late touchdown run on fourth down gave the Jets a hard-fought 27-23 win over the Bills in a game where the most enduring memory is Sam Darnold scrambling around to avoid a sack and finding Robby Anderson in the end zone for a spectacular touchdown.

However, something else of significance happened, involving McGuire, late in the third quarter.

With the Jets down by seven, McGuire took a handoff and burst over the right side, breaking into the clear for a 34-yard gain. This was a nice but otherwise unremarkable play for the youngster, who rushed for a season-high 60 yards on the day, but he’s been unable to lock down a steady job since the end of that season, although he is currently on Dallas’ practice squad.

So why discuss this play now? Well, it’s actually the last time any Jets running back had a 20-yard run.

With Le’Veon Bell having departed earlier this week, you have to wonder whether this becomes any more or less likely to happen any time soon.

This somewhat remarkable anomaly raises a few questions. Why has it taken so long? When will it happen again? Also, how often would a team usually expect this to happen?

First let’s consider Bell. A dynamic talent for sure, and the sort of player you’d have expected to break many long runs for the Jets. However, his longest run with the team was just 19 yards.

As you’d expect, Bell broke plenty of big plays with the Steelers. He had 27 runs of 20 yards or more in his first five seasons, albeit only three in his last full season back in 2017. He then sat out the 2018 season before joining the Jets.

Maybe this is wholly attributable to the offensive line. After all, the Jets’ line was regarded as a major weakness for most of the past few years. Then again, the downturn in these breakaway percentage type metrics could be a sign Bell was already losing a step before his sabbatical, so it will be interesting to watch his progress on his next team.

Let’s consider the offensive line next. Obviously this has been completely rebuilt since the 2018 season, supposedly for the better. However, while the Jets were the only team in the NFL that didn’t have a running back with a 20-yard rush in 2019, they had actually racked up 11 20-yard gains in 2018.

Amazingly, that included four in one game alone. The early season clash between the Jets and Broncos was one of the most anomalous games in NFL history as, out of nowhere, Isaiah Crowell rushed for a team-record 219 yards on just 15 carries, setting an NFL record for yards per carry in a game in the process. That was not all though. Bilal Powell also added another 99 rushing yards on top of that.

The offensive linemen that day? Kelvin Beachum, James Carpenter, Spencer Long, Brian Winters and Brandon Shell. And at that stage, everyone figured the Jets had fixed their offensive line for good and were destined to have one of the league’s top units.

Of course, they didn’t come close to repeating that success, although they did spring plenty of big runs, culminating in McGuire’s effort we mentioned earlier. Let’s return to that:

By now, Long had been struck down with a incurable case of inexplicably no longer being able to snap the ball straight, so the Jets had moved him to guard with Jonotthan Harrison filling in at center and Carpenter on injured reserve.

There’s nothing complicated about this run as McGuire exploits a hole opened up by two combo blocks behind a dual-tight end set on the edge and breaks it into the open. However, in the 24 games since then, the Jets haven’t been able to repeat the feat.

In that time, the Jets have had three rushes that went for 20 yards, but none were by a running back. Darnold scrambled for two of them, including the touchdown against Denver a few weeks ago, and Vyncint Smith had the other on an end-around.

How does that compare with the rest of the league? As noted above, the Jets were the only team in 2019 with no 20-yard runs by any of their running backs. Miami was the only team that was close, as they had just one – a 27-yard burst by Myles Gaskin – but Gaskin already had another one this season.

Most teams were way more prolific in this category, with over half of the league in double figures for 20+ yard runs and, while that includes runs by quarterbacks and receivers, it’s obvious that isn’t enough to account for the discrepancy. For example, the Ravens led the league with 23, but only 11 of them were by Lamar Jackson.

Ultimately, it is pretty incredible that the Jets have gone so long without a long run, even if you don’t rate their offensive line or running back personnel. Maybe it’s an over-correction or regression to the mean from that bizarre Denver game in 2018 – who knows?

It’s definitely hard to explain. In those 24 games since the Jets last had a running back with a 20-yard rush, they’ve allowed 16 carries of 20 yards or more, including Chase Edmonds’ 29-yard touchdown last weekend. That’s despite having one of the league’s best run defenses over that period.

Looking ahead, fans are probably hoping that Frank Gore is phased out so that some of the younger and more dynamic options get more playing time, but could he be the one to break the streak? Gore had five 20-yard runs in 2018 and four in a reduced role last year. Based on how spry he’s looked whenever he has a running lane this year, though, that seems unlikely.

Hopefully one of the youngsters – La’Mical Perine, Ty Johnson and Josh Adams – will be able to start breaking some big runs over the remainder of the season to establish themselves as potential contributors for 2021 and beyond.

The rookie Perine broke a couple of long runs in the intra-squad scrimmage back in August, while Adams had four 20+ yard runs with the Eagles in 2018.

Johnson might be the best bet, though. He broke a ton of long runs in college and had a game at the end of his rookie year where he averaged over 20 yards on three carries.

The Jets are long overdue another play like this. Hopefully their retooled offensive line can get healthy, build some chemistry and start making runs like this a more regular occurrence in the weeks to come.