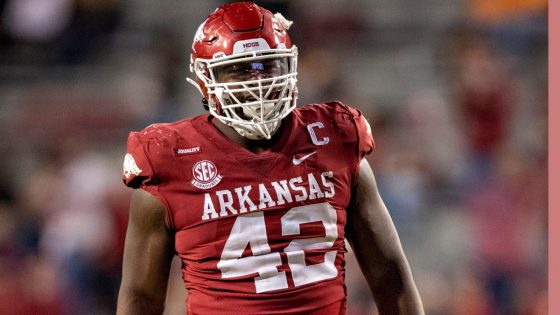 Defensive lineman Jonathan Marshall should bolster the Jets’ front seven, but what might the 2021 sixth-rounder’s overall role entail?

The Jets employ a defensive line that carries superb potential.

Quinnen Williams is one of the top young players in the league at his position and Sheldon Rankins should provide a veteran presence on the interior of the unit. Carl Lawson, who the Jets inked to a three-year, $45 million deal in March, will add a critical pass-rushing element as well.

That doesn’t mean the depth aspect of the group isn’t crucial though — the Jets still need reliable bodies on the back end of the depth chart.

Enter Jonathan Marshall out of Arkansas, who joined Gang Green via the No. 207 overall draft selection in this year’s sixth round.

At 6-foot-3, 310 pounds, it’s obvious Marshall sports a significant frame and carries on-field upside. What may his role be if he were to make the final roster past training camp and the preseason?

There’s likely no chance Marshall would start on the interior of the defensive line right away.

We can’t predict the long-term future, but as for the near future, it’s clear the Jets will start Quinnen Williams and potentially Sheldon Rankins at the pair of defensive tackle spots in a 4-3 defensive scheme.

Because don’t forget, Williams wasn’t the most healthy player during his first two seasons — the 2019 first-round pick missed three games in either year. He additionally underwent offseason surgery in May to repair a broken bone in his foot.

Rankins has also experienced his fair share of injury-related issues, having played a full 16-game season just twice in five years. He played in only 10 and 12 regular-season matchups in 2019 and 2020, respectively, for New Orleans.

Injuries are a possibility with either potential starting defensive tackle — if they arise again in 2021, Marshall could see the team start to enhance his role.

However, there’s a chance Jonathan could find some time even without injuries to alternative options. Given his large frame — 6-foot-3, 310 pounds, as previously stated — the Jets could field Marshall in short-yardage and goal-line sets. New York will require significant size in those situations; Marshall brings that to the table.

Special teams would additionally be an area (most likely) for the rookie, as it is with many young players.

Who is Marshall’s competition?

Marshall won’t necessarily be competing with the aforementioned likely starters — Williams and Rankins. In regard to a depth role and a role in short-yardage/goal-line sets, Marshall’s competition should be Folorunso Fatukasi and Nathan Shepherd.

Both will be tough individuals to surpass on the depth chart given their experience in this league and familiarity playing alongside some of their fellow defensive counterparts. Shepherd played in 14 games for the Jets last year (three starts) while Fatukasi played in 15 (eight starts). In fact, Fatukasi located playing time on 45% of the team’s 2020 defensive snaps.

Fatukasi and Shepherd’s past accomplishments with the Jets could lead to them initially sitting above Marshall on the depth chart. But that doesn’t mean Marshall wouldn’t be able to impress this coaching staff down the line en route to a superior role.

Marshall will have a lot of ground to cover

All in all, expect Jonathan Marshall to possibly slot in as the fourth or fifth interior defensive lineman on the depth chart in the event he makes the team. He’d provide dependable reinforcements but would need to become accustomed to the speed of the NFL before assuming a more significant role.

His initial calling could be special teams and the short-yardage scenarios, both of which would supply him the opportunity to portray his skills in hopes of earning further on-field responsibilities.