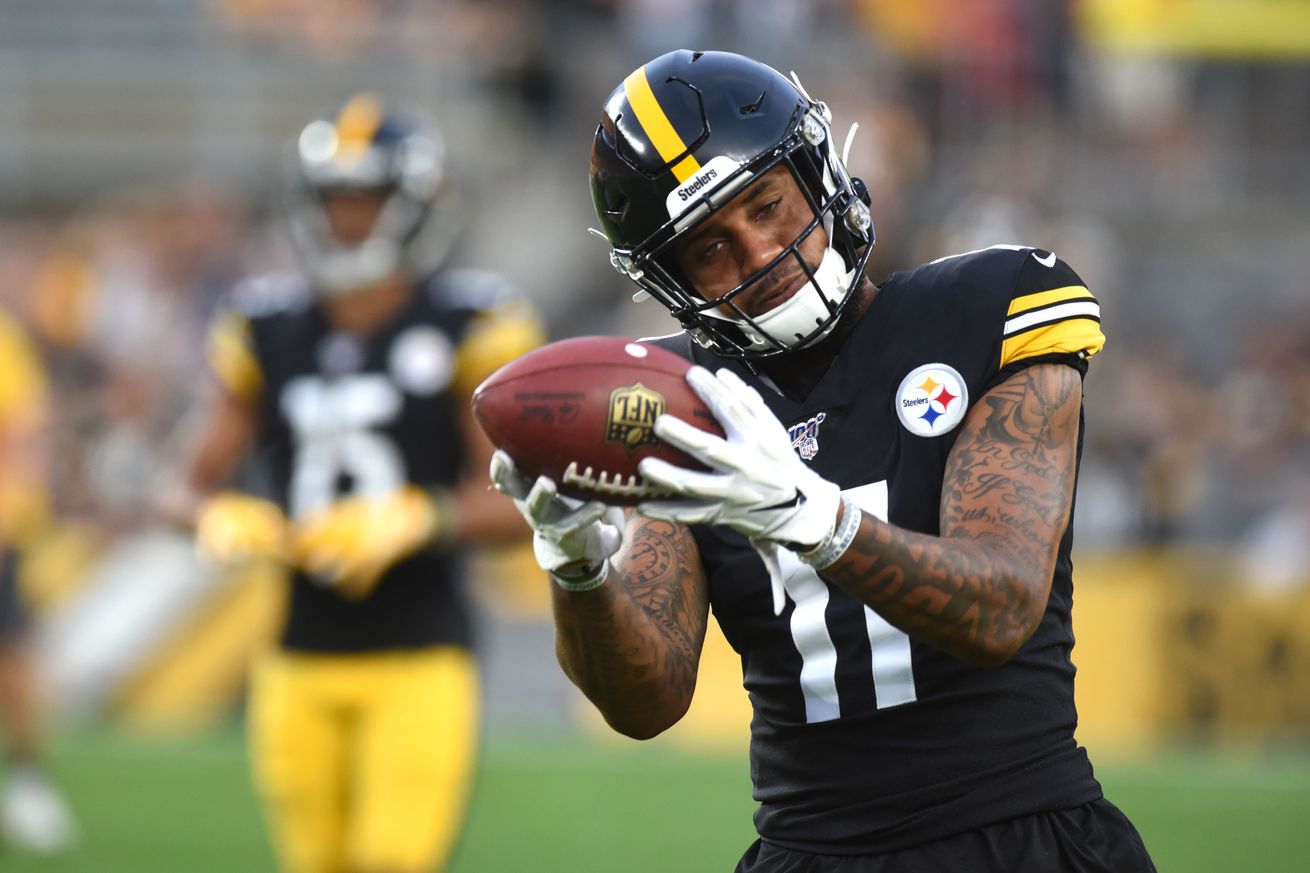 Last week, the Jets addressed increasing concerns about their wide receiver depth by signing veteran wide receiver Donte Moncrief. We’re therefore going to take an in-depth look at his film and statistics to assess his strengths and weaknesses.

The 27-year old Moncrief, who is listed at 6’2” and 216 pounds, was a third round pick out of Ole Miss in 2014. He’s caught over 200 passes in his NFL career, but has had mixed fortunes in recent years with some injury issues. He caught just four passes last season.

Moncrief was a four-star recruit coming out of high school, where he starred at wide receiver and also intercepted four passes on defense, while also being one of the top long jumpers in his state.

Having been recruited to Ole Miss, Moncrief caught 31 passes in his freshman year but then broke out as a sophomore with 66 catches for 979 yards and 10 touchdowns. That included a 173-yard, three touchdown effort in the Egg Bowl against Mississippi State.

Although his production was down slightly in his junior year (59 catches, 938 yards, six touchdowns), Moncrief opted to enter the 2014 draft at the end of his junior year.

Despite an impressive scouting combine, Moncrief dropped to the end of day two and was eventually selected by the Colts in the third round.

As a rookie, Moncrief only started two games, but contributed well with 32 catches for 444 yards and three scores, showing some promise with 100-yard games against Pittsburgh and Washington.

In year two, he took his game to another level as he posted career-highs with 64 catches and 733 yards, adding six touchdowns. He added five catches for 86 yards and a touchdown in two postseason games.

Over the next two years, Moncrief’s career stalled as he missed 11 games due to injuries. Although he caught a career-high seven touchdowns in 2016, he averaged a career-low 10.2 yards per catch and only had 30 catches. His average in 2017 was actually the highest of his career (15.0 yards per catch) but he only had 26 catches in 12 games.

Moncrief ended up hitting the open market where he ended up signing a one-year prove-it deal with the Jaguars for just under $10 million. He had a big game against the Jets – his only 100-yard game since 2015 – and ended up with 668 yards and three scores on 48 catches.

Last season, Moncrief signed for the Steelers but had a rough start to his career with them. After just five appearances and four short catches, they cut him loose. He also played three games with the Panthers but didn’t catch a pass for them.

The Jets signed him last week following injuries to Jeff Smith and Lawrence Cager with a few other receivers already out of action.

Let’s move onto some more in-depth analysis of what Moncrief brings to the table, based on in-depth research and film study.

Moncrief has decent size and posted some good numbers for speed and explosion at the scouting combine with a 4.40 in the 40-yard dash, 39-inch vertical and 132-inch broad jump. His agility and strength numbers were below average though.

Moncrief mostly plays on the outside, which is where he generates the majority of his production.

Moncrief never carried the ball on an end around or jet sweep during his college career but had four carries for 17 yards as a rookie. He only has one carry since then, though.

Moncrief has been a big play threat over the course of his career with his 4.4 speed and an ability to catch jump balls down the field.

He has four touchdowns of 60 yards or longer in his career, all of which came on deep passes, including this one where he made a good double move to get behind the defense.

He was not successfully targeted downfield last season, but had some big plays in 2018, including an 80-yard touchdown against the Colts and another long touchdown where he burned Trumaine Johnson.

When Moncrief first entered the league, he was considered a raw route runner, but has worked hard at becoming a good technician. By the time he was in his second season, he was impressing with his ability to run a full route tree and get good separation.

This first started to draw attention in an early season game against the Jets, where Moncrief got away from Antonio Cromartie a handful of times on his way to a 100-yard game. He also made this catch against Darrelle Revis.

He makes good use of the fact defenses know that he’s a deep threat by being effective on comebackers and dig routes as he is capable of stopping on a dime.

Moncrief has a reputation as someone with bad hands because of his early struggles with the Steelers. Reports indicate that he dropped four passes in his first game with them and then another drop the following week led to an interception by his now-teammate Bradley McDougald.

The reality is that this is somewhat harsh. Of those four so-called drops, three saw a defensive player knock the ball away from him rather than him dropping the pass himself. While these are catches he would perhaps have expected to make, he was recovering from a preseason finger injury which was apparently a factor in these drops.

Ultimately, he ended up with just four catches on 14 targets last season. However, his catch rate entering the year was over 60 percent, which is acceptable for someone who runs a lot of go-routes. He’s also never had more than four drops in a season.

He has showed an ability to come down with contested catches in the past, including on this play where he caught the ball with one hand.

He can sit down in an open area and box out a defender on his back. He is also a player you can throw it up to and he will go up over a defender to bring the catch down.

Moncrief’s numbers for yardage after the catch are somewhat misleading because he’s had a lot of long plays where he’s caught the ball behind the defense and took it to the house.

He doesn’t break a lot of tackles and isn’t particularly elusive, although is able to turn a short pass into a longer gain.

When he can break away from a tackler, Moncrief possesses the speed to break out into the open field.

Moncrief only has one fumble in his NFL career, but he also lost the ball on his first preseason catch with the Steelers. Again, this may have been attributable to his finger injury.

Moncrief’s blocking grades were pretty good in his first few seasons, but have been poor over the past few years. The main reason for this is penalties. He has five holding penalties, three block-in-the-back penalties and one face mask penalty in his career.

That at least speaks to his effort in trying to make an impact as a blocker. Here’s a play where he does a good job.

Moncrief has decent size but he only posted 13 bench press reps at the combine so he’s had to work at his strength since entering the league.

He seems to fare well at the catch point, isn’t easily re-routed and can hang onto tough contested catches.

He has had three offensive pass interference penalties in his career, as he sometimes has a tendency to push off.

Moncrief didn’t return kicks in college and has just 12 yards on two kick-off returns at the NFL level. He did return two punts for touchdowns in high school though.

Moncrief’s receivers coach in Indianapolis, former Jets wide receivers coach Sanjay Lal, said that Moncrief watches a lot of film and wants to get better but has to learn to rely on his physical gifts more.

He shows an ability to sit down in open spots in a zone defense and can read and adjust to coverages as he does on this option route.

He has only had one pre-snap penalty, a false start, in his career so far.

While Lal appreciated Moncrief’s efforts to get better, it seems like he was frustrated with his lack of consistency as he said he “blows hot and cold”.

He hasn’t had any off-field issues and doesn’t give rise to any concerns with on-field discipline.

Durability is a concern for Moncrief, who played in all 16 games in his first two seasons but has missed a lot of time since then.

While he showed toughness with his desire to play through a dislocated finger in 2019, this affected his play and he missed a number of games because he was scratched from the line-up. In 2018 with the Jaguars, he had started a career-high 14 games, though.

Prior to that, he missed six games with a shoulder sprain and one with a hamstring injury in 2016 and four games in 2017 due to a late-season ankle injury. He was also dealing with another shoulder injury in August, which derailed a good start to camp for him.

As noted, Moncrief has size, can play in the slot, is a downfield threat and runs a full route tree. As such, he’s an ideal player to bring in to round out a group that has several players nursing injuries.

His history with the Colts links him to assistant general manager Rex Hogan, as well as about a dozen current Jets who are former teammates.

He was briefly a teammate of Greg Van Roten and Chris Hogan in Carolina last season, although Hogan was on injured reserve the whole time Moncrief was with the team.

As with Hogan, you’re not going to find a player that magically fixes everything at the wide receiver position in a situation like this, but someone like Moncrief is about as good as you can find at this stage of this offseason.

There were extraneous circumstances behind why he was so ineffective last season, so he could be primed for a bounce-back if he gets enough opportunities.

He has a good chance to make an impression with the Jets, but if some of the younger players the Jets were hoping would step up this year are available to return sooner rather than later, then Moncrief might find himself overlooked. He therefore needs to make an early impression.