This past week we asked you which rookie running back would finish with the most yards in 2021, and now we’re turning our attention to the wide receivers. This year’s wideout class was a great one, with three going in the top ten picks.

Two more then went later in the first round, and then five were off the board in the second. The crop included reigning Heisman Trophy winner DeVonta Smith, and LSU star Ja’Marr Chase who was reunited in Cincinnati with college teammate Joe Burrow. 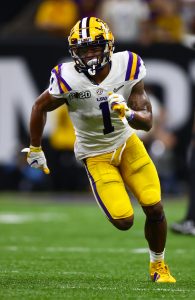 Chase became the first receiver off the board when the Bengals nabbed him with the fifth overall pick. He should already have great chemistry with Burrow, so he’s got that working in his favor. Tee Higgins and Tyler Boyd are still there, but the team moving on from A.J. Green this offseason means Chase should see plenty of opportunity right away. Will his rapport with Burrow and a potentially improved Cincy O-line be enough for him to seize the rookie receiving title?

The following pick, the Dolphins took Jaylen Waddle from Alabama at number six. Waddle is also reconnecting with an old college quarterback as he’ll re-team with Tua Tagovailoa in Miami. His blazing fast speed gives him plenty of upside, although working against him is the fact that he missed a good chunk of the 2020 season due to injury. Will Fuller will have to sit out the first game of the 2021 season with a suspension, but DeVante Parker and Mike Gesicki will also be competing for targets.

Smith *also* is getting paired back up with a familiar face under center. The Heisman winner played with Eagles second-year quarterback Jalen Hurts at Alabama. Despite winning the award for best college football player in the country, Smith was the third wideout taken. Will he use that as added motivation and come out with a chip on his shoulder? He certainly shouldn’t struggle for playing time with Philly’s receiving depth chart being thin as ever. Jalen Reagor, Travis Fulgham, and Greg Ward Jr. are all he has to compete with. 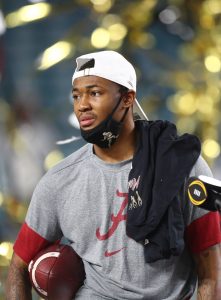 The other two first-rounders were Kadarius Toney from Florida to the Giants at 20 and Rashod Bateman from Minnesota to the Ravens at 27. Toney surprised New York by skipping OTAs and apparently might begin the year in a gadget role as he’s buried behind Sterling Shepard, Kenny Golladay, Darius Slayton, and Evan Engram in the pecking order, so he’s got his work cut out for him. Bateman has a path to a breakout with Baltimore in desperate need of receiving help, but the Ravens’ passing game is going to be a wild card.

Elijah Moore was the next big name, with the Ole Miss product going to the Jets at 34. He’s also got upside, but has a few guys ahead of him and will have a rookie quarterback throwing to him. Rondale Moore (Purdue) to the Cardinals at 49, D’Wayne Eskridge (Western Michigan) to the Seahawks at 56, Tutu Atwell (Louisville) to the Rams at 57, and Terrace Marshall Jr. (LSU) to the Panthers at 59 round out the rest of the round two receivers.

So, what do you think? Which receiver will rack up the most yards in 2021? Who are the later-round candidates or UDFAs who can join these players as early contributors? Vote in PFR’s latest poll and weigh in with your thoughts in the comments section.