The Jets did not fortify their wide receiver group in the draft, but that was not by design. The Jets had their eye on Georgia wide receiver Mecole Hardman, Manish Mehta of the Daily News (on Twitter) hears, but the Chiefs beat them to the punch. 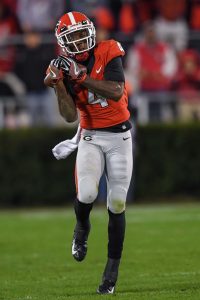 Apparently, the Jets were ready to pull the trigger on a trade with the Eagles that would have allowed them to grab Hardman at No. 57 overall, but the Chiefs beat them to the punch by moving up to the No. 56 pick. The Chiefs now have the speedster as a potential replacement for Tyreek Hill, who is expected to be released any moment now. Meanwhile, the Jets are left to sift through what remains of the wide receiver market to find support for Quincy Enunwa, Robby Anderson, and Jamison Crowder.

The Jets also explored moving up to the top of the second round to get in on cornerback run, but they found the asking price to be too steep. They eventually took a cornerback in the sixth-round when they plucked oft-injured Rutgers corner Blessuan Austin from about 30 minutes down I-95.