The Jets will release punter Thomas Morstead today, according to NFL.com’s Tom Pelissero (Twitter link). As a post-deadline cut, Morstead will be available on the waiver wire for the league’s other 31 teams. 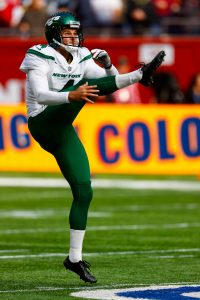 Morstead, 35, first entered the league as a fifth-round draft pick of the Saints in 2009. After earning a ring as a rookie, he signed multiple extensions to stay in New Orleans through 2020. This year, the Saints were more than $100MM over the cap, so he was released in the middle of their numbers crunch.

Morstead landed with the Jets in mid-September, replacing the injured Braden Mann. But, with Mann designated for return, Morstead’s services are no longer needed.

The veteran missed only two games in his 12 Saints seasons and punted in all seven of his Jets contests, bringing his career total to 197 appearances.