Bolstering the offensive line resided as one of the Jets’ priorities coming into the offseason. They have added All-Pro Kelechi Osemele and brought in potential starter/swing man Tom Compton. Another veteran is in play. 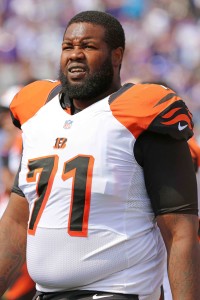 Andre Smith visited the Jets on Monday, Ian Rapoport of NFL.com reports (on Twitter). While Smith is no longer in his prime, with the Cardinals having released him midway through a rough 2018 season, he has been a contributor for 10 years.

The former Bengals first-round pick has enjoyed three stints in Cincinnati, the most recent coming after the Cardinals cut him. Smith, 32, has started 93 career games, including eight last season.

Kelvin Beachum and Brandon Shell remain in place atop the depth chart for Gang Green at tackle. The Jets have been rumored to be heavily interested in trading down from their No. 3 draft slot, in order acquire more picks, but the team’s need at edge rusher may nix those plans.

It’s possible more additions to the Jets’ front may be on tap, but as of now, a similar-looking group could be slated to start in 2019. New York ranked last in the league in Football Outsiders’ adjusted line yards metric in 2018.