The Jets are taking a player off hands of their in-state rivals. New York is claiming receiver/returner Quadree Henderson off waivers from the Giants, a source told Field Yates of ESPN.com (Twitter link). 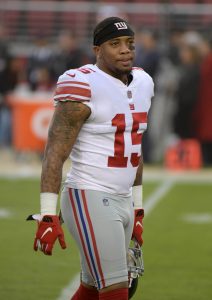 The Giants waived Henderson on Wednesday, and he wasn’t out of a job very long. Henderson played his college ball at Pittsburgh, and signed with the Steelers last offseason as an undrafted free agent. He was waived by the Steelers at final cuts, and eventually signed to the Giants’ practice squad. He bounced between the practice squad and active reserve before his season was ended in November by a shoulder injury.

In five games, Henderson returned nine punts for 68 yards, and returned five kicks for 112 yards. The Jets just lost their returner from last year, Andre Roberts, to the Bills, so this pickup makes some sense. Roberts was an All-Pro as a returner last year, so Henderson will have big shoes to fill if he ends up winning the job. Henderson led the FBS in return yards in 2016, so he’s clearly got some potential.