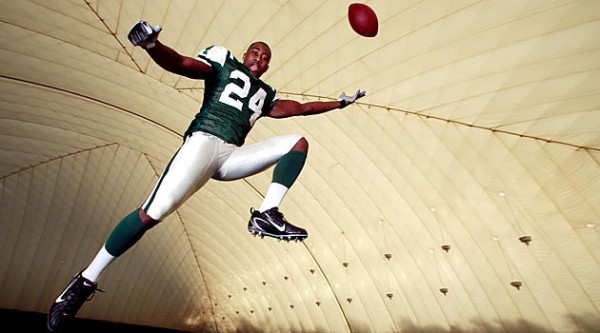 I found out about the news late Wednesday evening, and when I read it the following statement ran across my brain.

“Trade everybody to get him.”

I then laughed at this for second, gathered my thoughts and re-evaluated the words that popped into my brain. During the re-evaluation period, a new statement ran across my brain.

“Trade almost everybody to get him.”

My brain is stupid. The news I’m referring to is that Woody Johnson, owner of the New York Jets, is beginning to explore options to trade the man once considered the best corner in football, Darrelle Revis. Per Jason La Canfora of CBS Sports, now that the general manager (John Idzik) has been signed, acquiring assets for the future seems to be the plan for the J-E-T-S:

Revis, whose contract voids after the 2014 season, is set to earn $6 million in 2013 (between salary and bonuses), and owner Woody Johnson has strong reservations about the ability to extend Revis’s deal, the sources said. Johnson has expressed his desire to attempt to land value for Revis now, rather than risk losing him as an unrestricted free agent a year from now, most likely seeking as much draft-pick compensation for him as possible.

The Jets are very much in transition mode, they have cap issues moving forward and are trying to embark on a rebuilding process after firing former long-time general manager Mike Tannenbaum. Revis, who missed almost all of last season after suffering a torn ACL, engaged in a long holdout in 2010 that resulted in a contract extension that was more of a Band-Aid than anything else.

Now, I’m not sure if the Jets just laugh at our face for the offer or not, but hey … at least I’m making the effort. That counts for something … right?

So the question remains: How much would you be willing to see your team sacrifice to acquire arguably the best cornerback in the NFL? (Because Richard Sherman is probably holding the crown right now.) Is Revis going to be the same after tearing up that knee? Am I willing to give up too much? Have you seen my Jaguars? Good grief. Let us know your thoughts in the comments section.

Eddie Maisonet is the founder and editor emeritus of The Sports Fan Journal. Currently, he serves as an associate editor for ESPN.com. He is an unabashed Russell Westbrook and Barry Switzer apologist, owns over 100 fitteds and snapbacks, and lives by Reggie Jackson’s famous quote, “I am the straw that stirs the drink.”

The post How Much Would You Want Your Team To Give Up To Get Darrelle Revis? appeared first on .