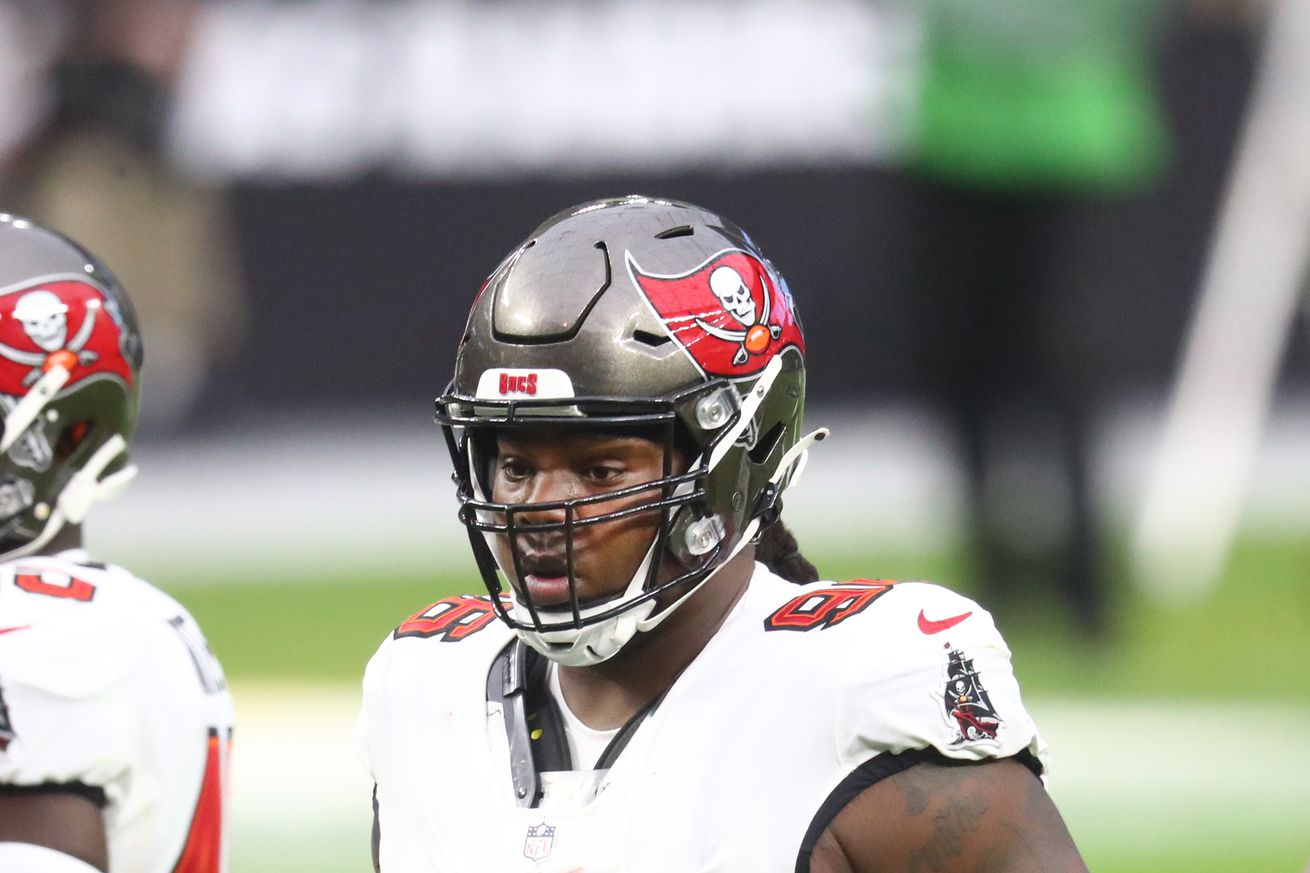 With the Jets on their bye week, it’s a good time to update you on which former Jets players are making their mark on other teams’ rosters. Having looked at AFC teams last week, we’ll be looking at NFC teams today.

As ever, this list is intended to be exhaustive, but if we missed anyone, let us know in the comments.

Leonard Williams is having a bounce-back season with the Giants as he seeks to prove himself worthy of a big money deal. He had five sacks in the first 10 games, including three in the past month. Williams also has 34 tackles, seven tackles for loss and 16 quarterback hits, including five on Sunday.

Eric Tomlinson has been up and down between the practice squad and active roster but has only played in one game. He played just two offensive snaps, although he did record a special teams tackle. The Giants just released him again a few days ago.

Kevin Pierre-Louis had only one career start when he left the Jets but he started three games for the Bears last year and has been a full-time starter this season. He’s racked up 46 tackles this year, including 16 against the Cardinals in week two. Pierre-Louis also has two passes defensed, a forced fumble and a quarterback hit but has given up four touchdowns in coverage. He also had a half-sack on Sunday but was called for roughing the passer on the play.

Others: Kicker/punter Kaare Vedvik is on the practice squad but hasn’t played yet. Offensive lineman Mike Liedtke is on injured reserve.

Offensive tackle Eric Smith is on the practice squad but was made active for one game, although he only saw action on special teams.

Others: Elijah McGuire was on the practice squad earlier in the season but he has since been released.

Deontay Burnett, who is currently on the practice squad, was active for two games earlier in the season. He had three catches for 19 yards, including a first down, against the Bengals but then did not register a catch against the 49ers.

The Packers recently added James Burgess but he hasn’t played yet on defense. He has seen action on special teams in three games, recording three tackles in kick coverage.

Parry Nickerson is now on injured reserve. He played in one game earlier in the year although he only saw action briefly on special teams

Ben Braden is currently on the practice squad but he was active for one game, during which he played the first four offensive snaps of his career at right tackle.

Buster Skrine remains in a full-time role as the Bears’ slot cornerback, although he has just two starts. He’s racked up 44 tackles, two passes defensed, a tackle for loss and a forced fumble. However, he’s missed six tackles, given up two touchdowns in coverage, committed four penalties and given up a catch on 76 percent of his targets.

Cairo Santos has done a decent job, as he’s missed just two kicks out of 34 all season and been perfect from inside 40 yards. He’s made a couple of clutch kicks – a game-winner against the Bucs and a long field goal to send the Saints game to overtime.

Long snapper Patrick Scales was with the Jets briefly early on in his career. Scales has one tackle in kick coverage this year.

Others: Marqui Christian is currently on the Bears’ practice squad.

Dakota Dozier has started all year at left guard for the Vikings, playing every snap. He’s given up two sacks, three penalties and a team-high 15 total pressures while grading out below average as a run blocker.

Oday Aboushi has made just two starts, one at each guard spot, but has seen action off the bench in three other games. He’s been called for three penalties while grading out below average as a run blocker.

Darryl Roberts recently went on injured reserve but prior to that was getting reps in the slot, which was a role he rarely played with the Jets. Roberts made just one start and has given up three touchdowns and four penalties in six games overall. He’s been credited with 20 tackles, three passes defensed and one interception.

The Bucs recently traded for Steve McLendon and he’s made some contributions against the run in his first four games. He has 12 tackles, including two for loss, and a penalty.

The only other ex-Jet on the Bucs is Kevin Minter but he’s mostly just played on special teams. He has four tackles in total. On Sunday he saw some rare action on defense and had a sack, but was called for roughing the passer on the play.

James Carpenter has started every game at left guard, but has graded out poorly as a run blocker, although he doesn’t have any penalties. In pass protection, he’s given up two sacks and 15 total pressures.

Linebacker Edmond Robinson recently re-signed for the team. He’s mostly contributed on special teams with five tackles in six games, but also has two tackles and a quarterback hit on defense.

Demario Davis remains a staple of the Saints defense and is leading the team in tackles with 59. He also has three sacks, seven quarterback hits, seven tackles for loss and three passes defensed.

Ty Montgomery has only played in three games so far and his only carry went for a loss. He has caught passes of 17 and eight yards though.

Others: Tight end Jason Vander Laan opted out before the season.

Robby Anderson is having a monster year for the Panthers where he is in the top five in the league in receiving yards, receptions and yards after the catch. He’s also caught almost 75 percent of his targets and has been proving that he was a number one receiver type after all and that he wasn’t just a one-trick pony.

Anderson has been one of the favorite targets for Teddy Bridgewater, who has done a solid job at quarterback for Carolina, despite their 3-7 record. Bridgewater has accounted for 16 touchdowns and has just seven interceptions. His quarterback rating is just under 99 and he is second in the league with a completion percentage of 72.

Trenton Cannon is one of the Panthers’ top special teamers, with three tackles in coverage so far this year, although he does also have two penalties. He also broke a career-long 98-yard kickoff return on Sunday. He’s played sparingly on offense, with 33 yards on eight touches.

Julian Stanford has also mostly contributed on special teams, as he’s not used very often on defense. He has seven tackles overall.

Juston Burris spent time on injured reserve with a rib injury but returned on Sunday and registered four tackles. He had started the first six games at safety, racking up 24 tackles including two for a loss. He’s struggled against the run and missed five tackles, but he’s been solid in coverage with two passes defensed and an interception.

Others: Pete Guerriero and Trumaine Johnson were both on their practice squad but have since been released.

San Francisco recently traded for Jordan Willis and he’s already made an impact with 1.5 sacks in his first three games. He has eight tackles in total since joining the team.

Raheem Mostert released in final cuts by the Jets many years ago and he exacted a measure of revenge with an 80-yard touchdown run on the first play against them in week two. However, he’s on injured reserve now. Mostert, who also had a 76-yard touchdown catch in week one, rushed for over 300 yards and caught 11 passes in four games prior to getting hurt.

Kerry Hyder is another player who was in camp with the Jets back in the day, although he was a defensive tackle at the time. He’s now an edge defender and has taken advantage of injuries to start eight games. He’s leading the team with 5.5 sacks and 13 quarterback hits, to go along with 33 tackles. He has missed eight tackles though.

Tom Compton hadn’t seen action on offense until last week’s game against the Packers, which he started but did not finish. He gave up one pressure and posted an average grade. He started again on Sunday.

Others: Dakoda Shepley and Josh Johnson are on the practice squad but haven’t played yet.

Jachai Polite has resurrected his career somewhat and is contributing in a rotational role with the Rams. He has four tackles and a sack in nine games, during which he has averaged about five defensive snaps per game.

John Wolford is the Rams’ number two quarterback but has yet to take any snaps.

Jamal Adams is having a rough season so far, missing half of it with a groin injury and struggling badly in coverage. He’s been statistically productive though, with 35 tackles, 5.5 sacks and nine quarterback hits in just five games.

Brandon Shell has done a solid job as the Seahawks’ starting right tackle. He’s given up three sacks and committed four penalties but has graded out well overall.

Nick Bellore is still a top special teams contributor and was leading the NFL in special teams tackles for a while. He currently has seven on the year. Bellore has also played some fullback this year, catching one pass for a first down.

Jason Myers is having another outstanding season kicking for the Seahawks, as he’s made all 10 of his field goal attempts and 33 of 34 extra points. On Sunday, he made a franchise record 61-yarder.

Geno Smith is still the Seahawks’ number two quarterback but Russell Wilson has played every snap so far this season so he is yet to see action.

Others: Seattle recently added Damon Harrison to their practice squad but he hasn’t played yet.

Kelvin Beachum has done a solid job, starting nine games at right tackle, during which time he hasn’t given up a sack and is grading out well as a run blocker. He has four penalties though.

Others: Kicker Mike Nugent is currently on the practice squad but hasn’t played yet.

We’ll update you again at the end of the season.