Linebacker Darron Lee, according to multiple reports, has been made available via trade. Still, Lee reported to the Jets for the club’s voluntary offseason conditioning program on Monday morning, Ian Rapoport of NFL.com (on Twitter) hears. 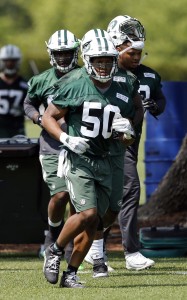 For now, Lee’s status remains unchanged. The young linebacker is still on the roster and GM Mike Maccagnan claims that he is still in the club’s plans.

However, it’s hard to believe Maccagnan given the recent addition of C.J. Mosley. The linebacker inked a five-year, $85MM contract, making the underperforming Lee expendable. Meanwhile, clubs could have interest in the former first-round pick given that he’s still on his affordable rookie contract for one more season with a possible add-on for 2020, if triggered before the May deadline.

Lee did tally 94 tackles and three sacks in 2017, but he took a step back in 2018, finishing with 74 tackles and no sacks in 12 games. To his credit, Lee did compile a career-high three interceptions last year, but he also missed four games due to a substance abuse ban.