For McKinney, his rookie season was derailed due to injury and then he nearly missed Sunday’s game against the Las Vegas Raiders due to an all-too-common false-positive COVID-19 test. He was forced to isolate from the team and only just made it back under the wire.

The Giants are thankful he did.

McKinney closed out Week 9 with seven tackles, two passes defensed, two interceptions and one touchdown. The pick-6 gave the Giants a lead they would not relinquish but only because of his second interception — one that saved cornerback James Bradberry from being the fall guy.

“We were in a Cover Three, they ran a double move, I was beat on the double move and Zay saved my life, so shoutout to Zay,” Bradberry told reporters after the game.

Bradberry was never in danger, however. McKinney recognized the play and the route from earlier in the game and saw it coming from a mile away. The veteran corner may have been beaten, but that played right into McKinney’s hands. Literally.

“I actually told Brad earlier in the game they did the same thing, I broke on it. They actually threw a back shoulder and I told him after that, I told him, I said, ‘If they do that again, I’m going to beat it and I’m going to pick it.’ They did the same thing, tried to run the double move, pumped them and then threw it the same way he pumped, and I made a play,” McKinney said.

“I don’t think I saved him, but he was there anyway. Either one of us would have made the play. I told him I had his back, and he knew that. I made sure that I accomplished that, and I did have his back on that play.”

It wasn’t a game-sealing interception, but it certainly put the Giants in position to win. And when push came to shove, Roche stepped up and made sure McKinney’s career day wouldn’t go to waste.

Selected in the sixth-round of the 2021 NFL draft by the Pittsburgh Steelers, Roche had his rookie season hopes dashed when he was waived as a part of final cuts in September. The Giants quickly claimed him off of waivers, but it was an uphill battle from there.

On Sunday, Roche was plugged in as the bona fide starter over Oshane Ximines, who was a healthy scratch. He responded with the biggest play of his life.

With the Raiders facing a second-and-10 from the Giants’ 13-yard line and only 44 seconds remaining in the game, Roche burst around the edge, leaving Las Vegas tackle Kolton Miller in the dust. He unloaded on quarterback Derek Carr, forcing a fumble that was recovered by Leonard Williams.

“I’d been looking at (Miller’s) set all game. I was going power for the most part, but that drive wanted to give a change up, wanted to switch it up against a good player and I beat him around the edge. He’s a great player. It was a great play,” Roche said after the game.

“It goes back to what we do in practice. Just practice and finishing all the time at the top of your rushes. That’s been drilled hundreds of times, so when you’re in the game your body is taking over.”

Roche didn’t see Williams recover the fumble, but he knew the Giants had won the game based on the reaction from the fans.

It’s been a while since the Giants heard fans cheering for them in their own stadium and now they’ve experienced it twice in three weeks. It’s a feeling they could all get used to and one being fueled by young, budding defensive stars. 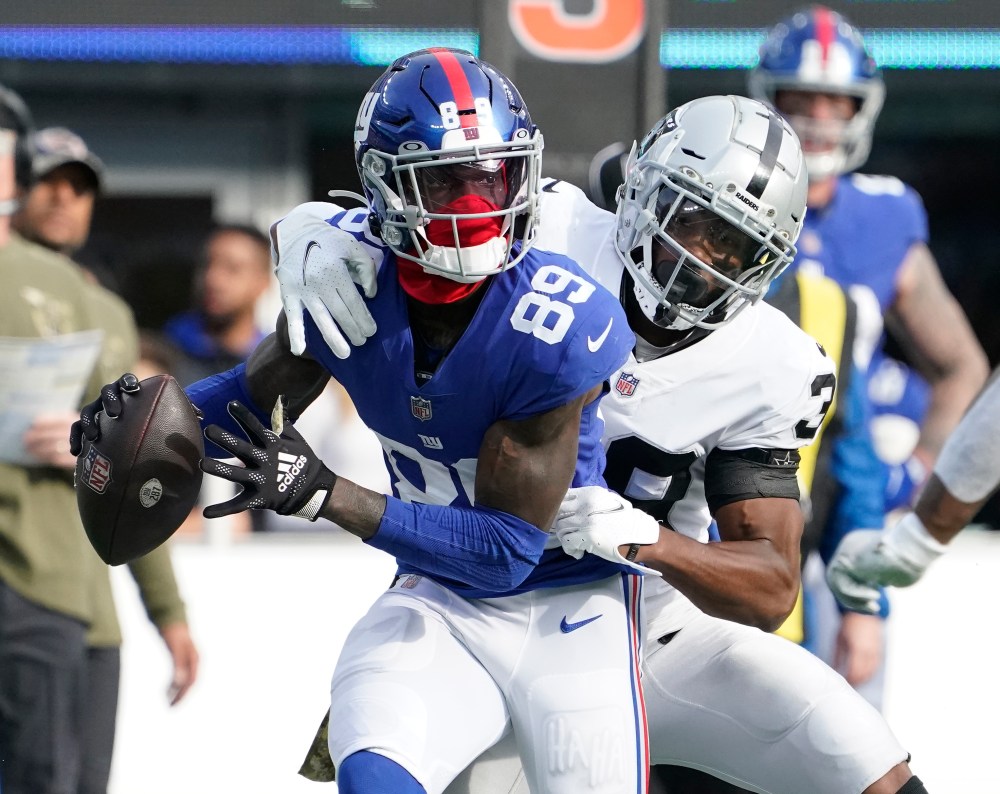