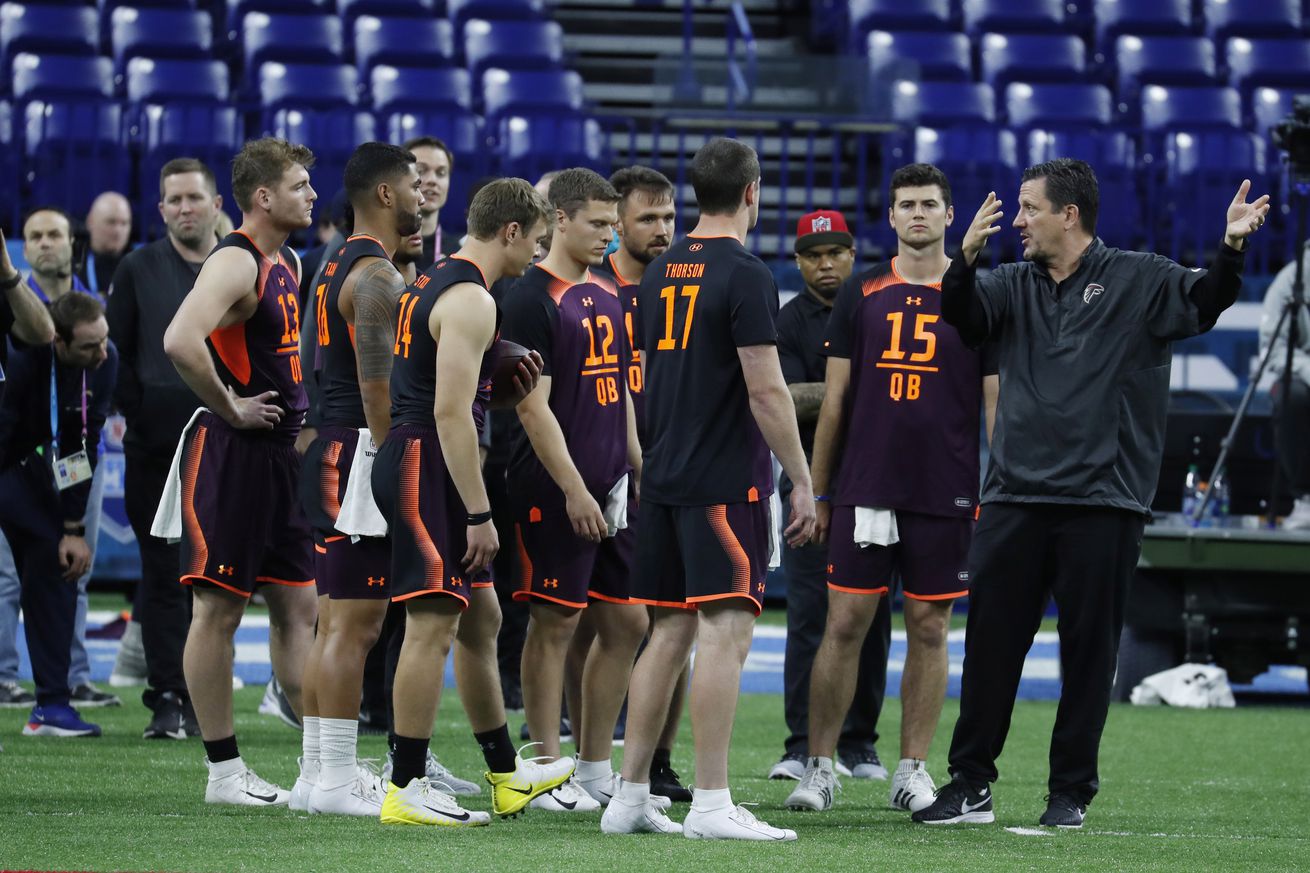 Let’s look at some of the data

There are a number of ways the New York Giants could attack getting their quarterback of the future. With two first-round picks, the Giants could use either to select the next quarterback. It’s possible there is still a talented quarterback sitting at pick 37 in the second round. Technically, they could just wait until 2020.

Play from a clean pocket

At the NFL, performance from a clean pocket has been proven to be the most predictive way of looking at quarterback performance from year-to-year. As more college data becomes available, it appears it is also a good measure for college prospects heading to the pros.

It’s the best look we get from quarterbacks in the closest to a controlled environment. We’ve also known for a long time that college completion percentage can be a predictive indicator of NFL success. With that, we can look at completion percentage and Adjusted Yards per Attempt — yards per attempt adjusted for touchdowns and interceptions.

However, we do have some new and more advanced ways to put more context into completion percentage and overall quarterback play.

Accuracy matters and it’s not typically something that wildly improves. It’s something Mike Leach, one of the pioneers of the Air Raid offense, has preached for quite some time. One of the problems with that, though, is the term “accuracy” is rather arbitrary. Should accuracy be considered making a ball catchable for the receiver or putting it in perfect placement for the best possible outcome? The definition can be debated. Until recently, we also didn’t have a way to quantify accuracy. Sports Info Solutions tracks On-Target Percentage, which they define as making a pass catchable, going back to the 2015 season.

We need a much bigger sample for any of this to be proven, but if your prior coming in was “accuracy doesn’t improve,” you have some backing. If you’re of the belief that accuracy is coachable, the limited amount of evidence does make that argument harder to back up.

Where this gets interesting is in the context of this year’s draft class, where accuracy is a question for a few of the projected first-round picks — and really most of the class in general. Let’s take a look at where these quarterbacks are and aren’t accurate by dividing the field into three sections past the line of scrimmage.

Kyler Murray is the most consistently accurate to all levels of the field along with Will Grier, who comes out as the most accurate overall on throws past the line of scrimmage. After that, there is at least some semblance of a question to one area of the field or more.

The wide range of accuracy issues here raises the question of where it matters the most. It could be pointed out the NFL has been gradually favoring shorter throws from quarterbacks. Per the NFL’s Next Gen Stats, the average Intended Air Yards on throws from qualified quarterbacks has gone from 8.9 yards in 2016 to 8.3 yards in 2017 to 8.2 yards in 2018.

That high percentage holds up for the NFL and pro quarterbacks can be quite successful with a high concentration of attempts in that range. Per Sports Info Solutions, the top-10 quarterbacks in Expected Points Added during the 2018 season averaged 70.2 percent of throws within 10 yards of the line with the lowest rate at 66.3 percent.

But a point that can easily be overlooked there is just because that is where the majority of throws are taking place, that doesn’t mean it’s also where the majority of value is happening. Of those top-10 quarterbacks, only one saw more than 30 percent of his total passing EPA come on the throws within 10 yards of the line of scrimmage — that was Ben Roethlisberger at 31.2 percent. So, while so many passes remain short, so much of the production comes deeper.

This is where the conversation really gets interesting for this draft class because it raises the most questions. Kyler Murray clearly has the ability to break and create out of structure and that’s part of the reason he’s been considered the top quarterback in this class and a near lock to go first overall.

After him, the questions come. Dwayne Haskins, though he has the deep accuracy, mostly stayed within the confines of the short, quick Ohio State offense — 54.7 percent of his passing yards came after the catch — and struggled some with pressure and when moved off his spot in the pocket. This leads to a much bigger projection to the NFL than many have indicated with Haskins.

Will Grier is willing to try to make things happen outside the pocket, but massively struggled there in 2018. Of 93 quarterbacks with at least 20 attempts outside the pocket last season, Grier was 92nd in yards per attempt (3.0). However, he did have the highest On-Target Percentage (78.9 percent) on those throws among that group, which suggests he was not the main culprit of his struggles on those plays.

Then there are the cases of Daniel Jones and Drew Lock, who have mirror opposite strengths and weaknesses. First, there’s Jones who had fine accuracy on the short throws, but concerning ability past 10 yards. At a glance, it makes sense that nearly three-quarters of Jones’s attempts came within 10 yards. He’ll fit best in a quick yards after the catch-heavy system, similar to the what the Giants have built and look likely to run in 2019. The problem with Jones, as seen in his accuracy and production numbers, is there isn’t much to be gained outside of that structure. An NFL team could make Jones look competent enough with a number of short passes, but the ceiling of the offense is always going to be lower if the ability to make plays in the intermediate and deep parts of the field is never consistently there.

Lock presents the opposite dilemma. With the top On-Target Percentage on throws 21 yards or more down the field, Lock is the rare prospect billed to have “arm talent” who can also back it up with downfield accuracy. But the issue is the lack of consistency on the throws that might make up the 70 percent of attempts closer to the line. If those are wildly hit or miss, there might not be enough opportunities to take advantage of the arm strength down the field. Lock probably presents the best ability to create out of structure, but his inconsistency within the structure on short-to-intermediate throws could greatly cut into the impact of that skill.

What this means for the Giants

It appears increasingly likely the Giants are set to pass on Haskins at sixth overall. Should they be looking for a quarterback, that would place them in the middle of the Lock/Jones debate — at least in the first round. With Jones, the potential to manufacture passable looking performance with easy short completions is there, but the ceiling for anything more than that is significantly lower than what would be ideal for a typical first-round pick. Lock brings the upside but a difficult path to reach it. Grier, meanwhile, might present the best case scenario — enough upside and traits that can be developed without the investment that could take the Giants out of looking harder at an upgrade within the next two seasons.

The Giants are not only in a position of trying to figure out when to move on a quarterback of the future, but also how to do so. The 2019 draft class offers a few developmental prospects, but the Giants must decide which traits they covet and which they feel can be developed. That decision could shape the direction of the franchise for the foreseeable future.