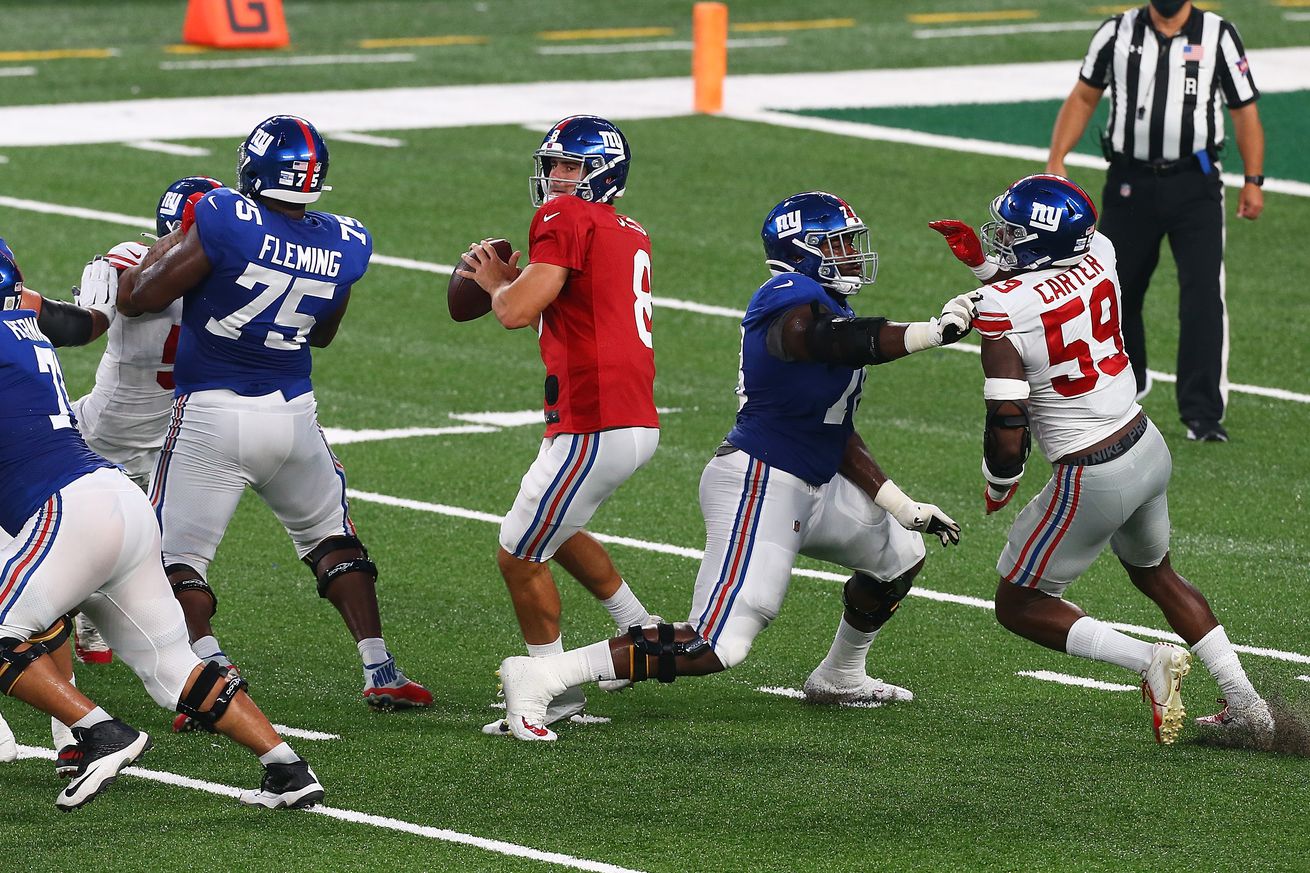 It’s a lazy late-August Sunday with regular-season football just a couple of weeks away. Let’s discuss a few things I’m thinking about today that relate to your New York Giants.

The waiving on Saturday of rookie running back Javon Leake caught me off guard. Obviously. Shoot, I had given him ‘Kudos’ in the morning for his work in Friday night’s Blue-White Scrimmage. I’m not sure what the Giants didn’t see, and I know Joe Judge isn’t going to tell us.

The move reminded me, though, of something I have been thinking about for a while. I think it is incredibly hard to predict how the Giants will structure their initial 53-man roster, which they have to do on Saturday. I will take my shot at that on Friday, the day after the final Blue-White Scrimmage. I won’t be shocked if my prediction and the Giants’ ultimate 53-man roster look like they come from different planets.

The Giants have a rookie head coach. They have a young, unproven roster with debatable decisions nearly every position. It’s going to be interesting. And, I think, surprising.

Daniel Jones and those fumbles

There are some who probably think I made too much of a fuss over the fumble by Daniel Jones in the Giants’ scrimmage on Friday night.

That’s OK. It was a nice play by Lorenzo Carter and perhaps in that setting with a red jersey on Jones wasn’t anticipating Carter’s swipe at the ball. Besides, I have said myself that everyone has to recognize that some fumbles will happen. All quarterbacks fumble occasionally when large, powerful, fast-moving men crash into them or whack at the ball. That’s a given.

There are, though, two things that concern me. The fundamental issue of ball security and the vague idea of what we call pocket presence.

When Jones fumbled, he was stationary in the pocket. He had two hands on the ball. But, the ball was being held down near his right hip rather than in a higher, sturdier position. If you watched any of the Blue-White Scrimmage Special (more on that below) one thing you did see was Joe Judge chiding Jones for the fumble and the way he was holding the ball.

After an offseason in which so much focus was placed on Jones working to improve his ball security it concerned me to see the ball not protected as well as it could have been.

The idea of pocket presence is one that is also often discussed with Jones. Our Mark Schofield has pointed out a number of times that Jones sometimes seems oblivious to the rush, as though he doesn’t feel it or sense it coming.

That is something quarterbacks have to be able to do. A slight step forward or a subtle slide to the side can be the difference sometimes between getting a pass away and not getting it away. I have had the pocket presence discussion with Schofield, Emory Hunt and others I respect. I just don’t know that it is something that can be developed. Jones isn’t a quarterback newbie. He’s a second-year NFL player, but he’s been playing the position — facing a pass rush — since at least high school.

If he lacks a true pocket presence, a true instinct or feel for oncoming danger now I think it’s fair to wonder if that will ever change in any significant way.

Don’t get this twisted. I am bullish on Jones’ future as the Giants’ quarterback. There is much to like, much to make you believe he can be the guy to lead the Giants for the next decade or so.

I don’t know exactly what I was expecting, but I was certainly disappointed by what I got from the televised version of the Giants Blue-White Scrimmage.

If I hadn’t seen the scrimmage first-hand myself, and was a fan excited about a chance to learn something from a first real glimpse of the team, I would have been disappointed.

These, though, are things I worry about.