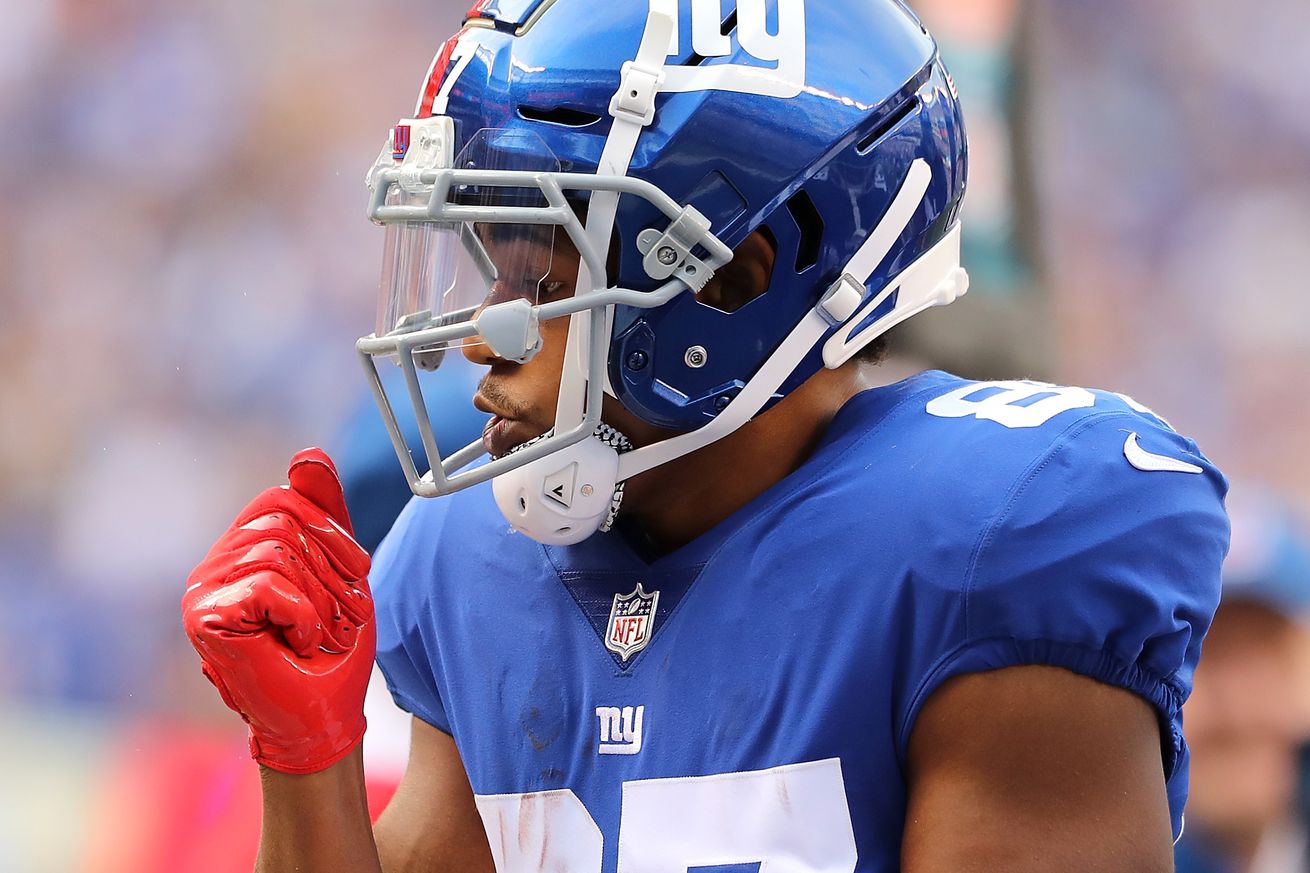 Happy Sunday, New York Giants fans! It finally feels like spring outside, the NFL Draft is approaching and your Giants begin their offseason program on Monday. With those things in mind, let’s offer a few thoughts as we impatiently wait for the draft.

About the Sterling Shepard signing

The Giants’ signing of Shepard to a four-year, $41 million extension — which the team should make official in the coming days as the offseason program gets underway — is one I very much approve of.

Since GM Dave Gettleman and coach Pat Shurmur took over the Giants have been undergoing a process of figuring out which players they want to go forward with, and which ones they preferred to move on without. Without belaboring those choices, it is apparent that the Giants have removed some talented players from their roster.

It is apparent they are trying to shape their roster not only around good players who fit the style they want to play, but also around good people. Shepard checks all of those boxes. Good player. Good teammate. Good locker room guy. The kind of player an organization wants to give a second contract to, wants to become a part of their core.

Matt Waldman of The Rookie Scouting Portfolio put it this way while appearing on the ‘Valentine’s Views’ podcast a few days ago:

“I think it shows they’re looking for someone they want to build this receiving corps around and they feel like he’s the type of worker, the type of route runner, the consistency factor in his game is good enough that you want to lock him up for a while. And I get that.”

In all honestly, I’m not concerned with the contract or with his fit next to Golden Tate.

The contract, at an apparent annual value of $10.25 million, put him 20th in the league among wide receivers, per Spotrac. I’m not going to complain about that being exorbitant for a quality 26-year-old receiver just entering his prime.

I am also not going to obsess about his fit with Tate. As Waldman pointed out during our show, while Tate was used heavily in the slot by the Detroit Lions and Philadelphia Eagles, he was highly productive playing on the outside for the Seattle Seahawks early in his career. Players move around, and I have confidence that Shurmur will find ways to create good matchups for both players.

The New England Patriots have been the dominant franchise in the NFL for nearly two decades. They have had staying power in an era designed perhaps not for total parity, but designed not to allow for extended dynasties.

Yes, Tom Brady and Bill Belechick have been at the center of it all. The Patriot way of constructing a roster has remained consistent throughout that time, though, and I have often wondered why NFL teams have not learned more from it.

New England doesn’t overpay for players. They will take two or three good ones at lesser cost instead of one great, or potentially great, one at an exorbitant cost. They believe in finding smart players who can do multiple things, not just collecting athletes who test well. They horde draft picks by trading down or by allowing other teams to overpay for their veteran players and happily accepting the compensatory pick they get in return.

Think about some of the moves the Giants have made since Gettleman became GM, and there are hints of the New England model in some of them. Tate, Shepard and a bevy of other low-cost veterans at receiver instead of Beckham. The younger and less expensive Jabrill Peppers instead of Landon Collins. Moving on from many high-priced veterans, albeit while taking on more dead money than the Giants would like. Trying to instill a business-like, team-first culture.

The ultimate success or failure of Gettleman’s time as GM is going to be determined by whether or not he can replace Eli Manning with a guy who can be a top-tier quarterback capable of championship-level performance. Still, when you study what he has done so far it isn’t hard to see some New England influence in what he has tried to do.

Would the Giants throw a major curveball in the draft and select Iowa tight end T.J. Hockenson with the sixth overall pick?

Pat Traina asked me to come up with a curveball scenario during an appearance on the ‘Locked on Giants’ podcast last week. I tossed out the idea of pushing the need for defense to the back burner and taking Hockenson.

Talking to me on the ‘Valentine’s Views’ podcast, Matt Waldman of The Rookie Scouting Portfolio said Hockenson would be a good choice for the Giants:

On Friday, our Dan Pizzuta tossed out a mock draft with Hockenson as the choice at No. 6 for the Giants.

Hockenson is the fifth-ranked player on the NFL.com big board. Lance Zierlein writes:

In a draft that feels light on high-end talent, Hockenson is an ascending talent with a chance to become one of the best all-around tight ends in the game. He should continue to fill out his athletic frame, but he’s already a sound in-line blocker with the toughness to sustain and finish. His above-average athleticism and separation burst will help him win against linebackers while his body control and hands give him an advantage over safeties. Hockenson has standout talent and fits any scheme, but he could be coveted early by teams looking to delve more heavily in 12-personnel (two TE packages).

Would the Giants really do this? I wouldn’t bet money on it, but if you are looking for an unexpected scenario this is one to keep in mind.

All of us who write about NFL teams for a living try to use whatever means we can to get some clues about what might or might not happen in the draft. That’s not easy to do, though. As one evaluator told me “No one knows anything. If they say they do, they are lying.”

I am always fascinated by this idea of players rising and falling on draft boards as we get closer and closer. To me, it’s more myth than reality. It is more the media or draft community, which has its own notions of how draft prospects should be valued, beginning to catch up with how NFL teams may value those players. The differences in those perceptions is what likely accounts for rising and falling, not necessarily changing grades on the players themselves.

I like to watch many of the well-connected NFL insiders — Peter King, Albert Bree, Daniel Jeremiah, Mel Kiper, Todd McShay among them — for trends. As many of them begin to coalesce around a single idea, it’s a pretty good guess that there is more behind that than simple opinion.

Just something to keep in mind as you see the rumor mill continue to swirl and final mock drafts begin to be presented.

Something to leave you with

I don’t have much to say about this, except that it might be the funniest Giants-related thing you watch during the buildup to the draft. ‘Kudos’ to Chris for bringing it to my attention.

Four power players in the 2019 NFL Draft. Let’s talk about Josh Rosen, shall we? @PSchrags as Steve Keim @heykayadams as Dave Gettleman@nateburleson as Bruce Allen@KyleBrandt as fashion-forward Bill Belichick pic.twitter.com/UlMEX40TaV