In 1989, the rivalry between the New York Giants and the Philadelphia Eagles was at a fever pitch. The Giants, led by head coach Bill Parcells, had won the Super Bowl three years earlier and were a top contender again after two disappointing seasons.

The Eagles, under head coach Buddy Ryan, had become a force in the NFC, winning the NFC East in 1988, and had designs of repeating when they invaded Giants Stadium on Dec. 3.

The Giants were in first place by a game with a 9-3 record. Philadelphia came in at 8-4. A win would give the Eagles sole possession of first place since they had already beaten the Giants, 21-19, at home in Week 5.

The showdown was on. The Eagles were ready. The Giants were not.

Philadelphia took an early 14-0 lead on two defensive touchdowns. The first was on a strip-sack by Reggie White and the second was when defensive lineman Clyde Simmons snatched a Phil Simms pass out of the air and then rumbled 60 yards to daylight.

The Giants narrowed the score to 14-7 on a 41-yard strike from Simms to Mark Ingram in the first quarter. Simms would get picked off again in the second quarter, which led to a field goal and a 17-7 halftime lead for the Eagles.

The Giants scored the first 10 points in the second half to tie the game at 17. Then this happened, as recounted by Frank Litzky of The New York Times:

Early in the fourth quarter, the Giants almost broke the 17-17 tie when Erik Howard sacked Cunningham and drove him into the Eagles’ end zone. The officials spotted the ball on the 2-yard line, making it fourth down and 33 yards to go for a first down.

Usually, Max Runager would have punted for the Eagles. But Cunningham, an outstanding punter in college, told Coach Buddy Ryan of the Eagles he wanted to punt, and Ryan let him.

It was a good decision. The ball sailed to the Giants’ 39 and bounced to the 7 before an apparently baffled (Dave) Meggett picked it up and returned it 9 yards.

Two plays later, the Giants gave up the ball again. (Mike) Golic sacked Simms and stripped the ball, and Mike Pitts recovered for the Eagles on the Giants’ 7-yard line. Three plays later, from the 2, (running back Keith) Byars squirmed into the end zone for the winning touchdown.

The Giants lost, 24-17, and sank to second place in the division. They wouldn’t lose another game the rest of the season. Not as much could be said for the Eagles, who lost to New Orleans in Week 15 to fall one game behind the 12-4 Giants at 11-5. 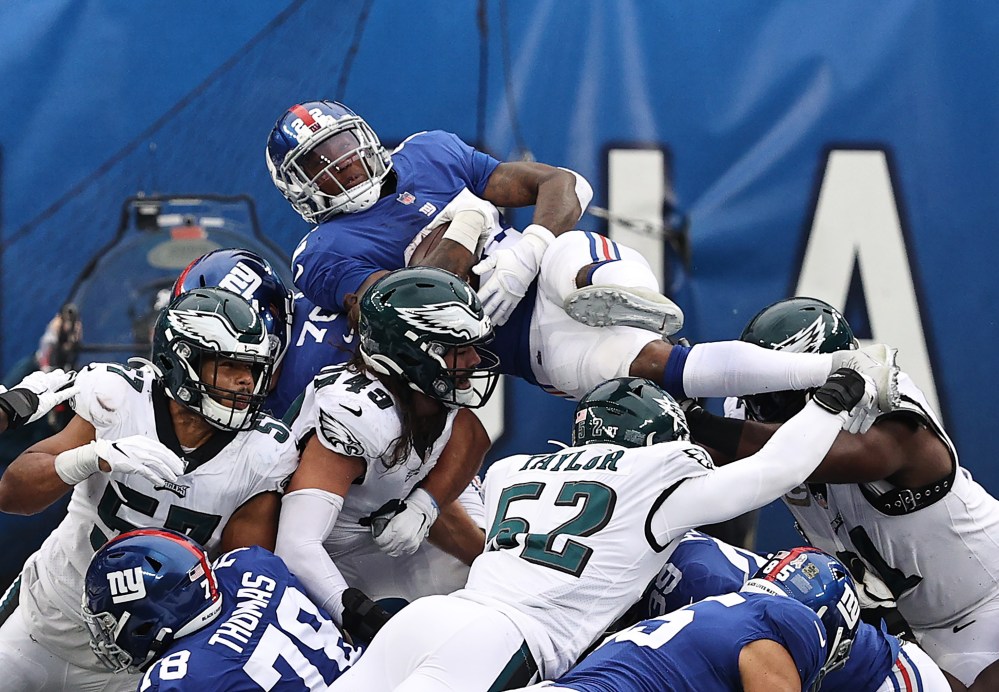