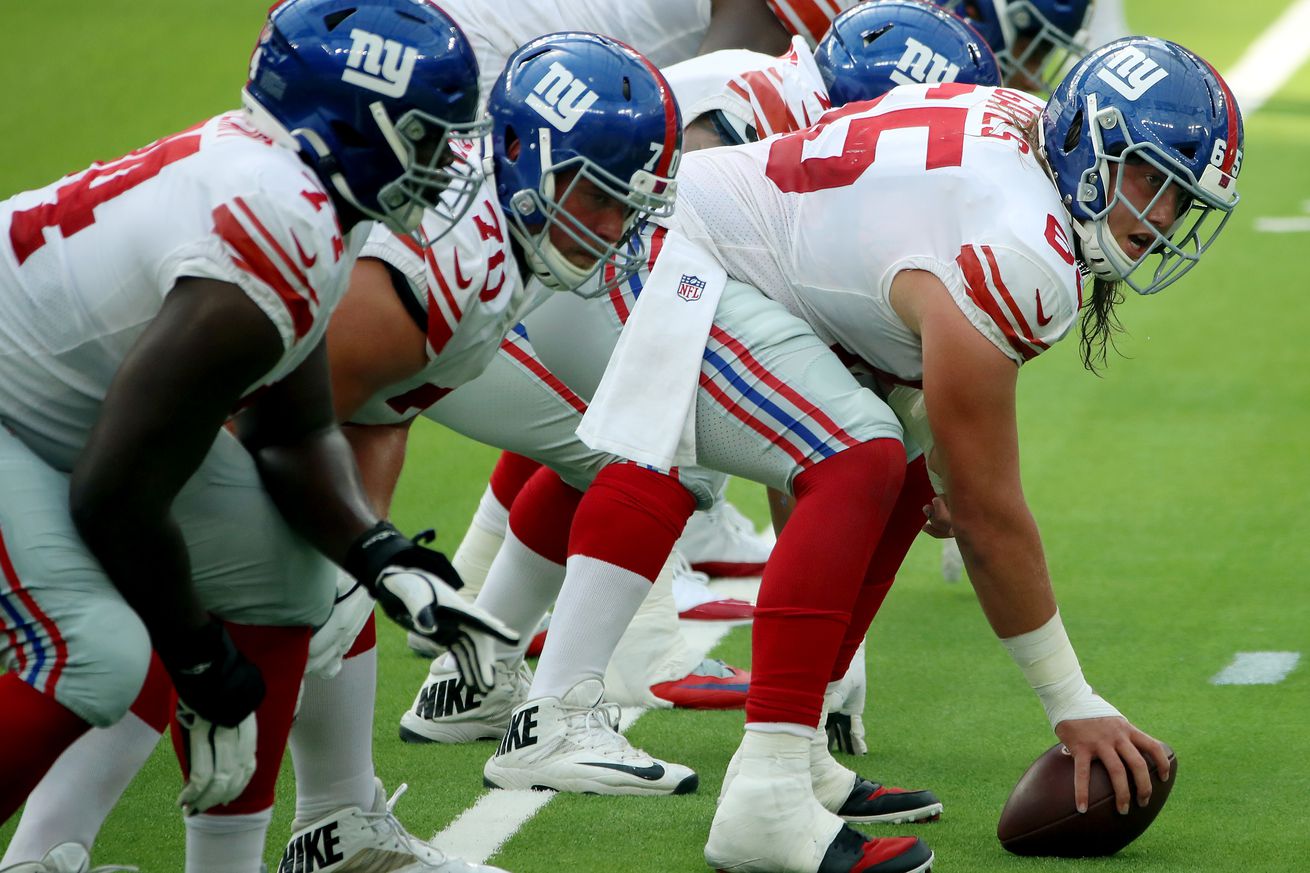 An alphabetical look at Sunday’s game

The 0-4 New York Giants look for their first victory of the Joe Judge era Sunday against the Dallas Cowboys. Here is our alphabetical look at the game.

A is for … Aldon: It’s pretty amazing that 31-year-old edge rusher Aldon Smith, after four years away from football, already has four sacks for Dallas. He had three in Week 3 against the Seattle Seahawks.

B is for … Biadasz: There were plenty of Giants fans who were not happy when the Cowboys traded up to take Wisconsin center Tyler Bidasz with the last pick of the fourth round in the 2020 draft, four picks in front of the center-needy Giants. With starting center Joe Looney out for the Cowboys, Giants fans get a close look Sunday at a player many of them coveted.

C is for … CeeDee: As in CeeDee Lamb, the rookie Dallas wide receiver who would be a bvig help to a struggling offense if he were a Giant.

D is for … Daniel: It could also be for Dak, but this is a Giants site and there is increasing pressure on Daniel Jones to step up his play and remind people why the Giants invested the sixth overall pick on him in the 2019 NFL Draft.

E is for … Explosive: The Giants haven’t had nearly enough of them on offense. The Cowboys seem to be an explosive play waiting to happen on every snap. Giants defensive coordinator Patrick Graham certainly faces a big challenge this Sunday.

F is for … Fake: Joe Judge has talked on multiple occasions about punter Riley Dixon’s ability to run with or throw the ball on fakes. That leads me to believe there will almost certainly come at least one occasion this year where the Giants ask him to execute one. Will this be the week?

G is for Garrett: So much attention has been focused on Jason Garrett this week, we are just as guilty as everyone else. Will the Giants offensive coordinator finally be able to get the team’s offense pointed in the right direction in his return to Dallas?

H is for … Hernandez: The Giants made Will Hernandez the 34th overall pick in the 2018 NFL Draft, the second guard taken behind Quenton Nelson (No. 6 overall to the Indianapolis Colts). Most believed at the time that he was the second-best guard in the class and would be an excellent pro. Hernandez is still struggling to prove that. Per Pro Football Focus, his 14 pressures allowed is the second-most of any guard in the NFL after four games. That puts him on pace to allow 56 pressures, after he allowed a combined 60 his first two seasons. Hernandez has an overall PFF grade of 55.0, 46th of 56 qualifying guards. Yes, he is playing with a rookie to his left and a first-time center to his right, but he has to be better than this.

I is for … Inept: Which is really the only way to describe the NFC East, a 3-12-1 division through four weeks where the first-place team has one victory and the winless Giants still have a legitimate chance to emerge as the division champion.

J is for … Jabrill: Will Jabrill Peppers, questionable with an ankle injury, play Sunday? It sure seems that way.

K is for … Kaden: Giants’ backup tight end Kaden Smith told the team’s official website this week that he can play the piano. Honestly, that is simply something I did not know.

L is for … Lewis: Cornerback Ryan Lewis played well in his first extended action for the Giants last Sunday. It would be a huge lift for the defense if he can play that well consistently.

M is for … McCarthy: Dave Halprin of Blogging the Boys tells us the honeymoon for new Dallas coach Mike McCarthy is “most definitely over.”

N is for …. Number to know: The Giants are fifth in the league in total defense, giving up 328.3 yards per game.

O is for … Out: This actually has nothing to do with the Giants. I just want to give “Kudos” to NFL Executive Vice President of Football Operations Troy Vincent for eloquently stating that the NFL is ready to accept its first openly out active player. In 2020 that should not have to be said, but it does have to said. Good for Vincent.

P is for … Peart: The Giants got rookie right tackle Matt Peart a dozen snaps last week against the Los Angeles Rams and he did OK. He will likely make another cameo at some point on Sunday. Let’s see how he does.

Q is for … Quiet: The quiet of empty stadiums is going to be shattered on Sunday when the Giants play a game in front of fans for the first time this season. AT&T Stadium in Dallas in likely to be about one quarter full.

R is for … Roundtable: If you haven’t listened to our ‘BBV Roundtable’ podcast assessing the state of the Giants, I have to ask why not. Also, I’ll be nice and offer you another chance.

S is for … Scoring: That is the purpose of having the ball. Less that 12 points per game and no touchdown in the last two weeks by the Giants is not going to cut it.

U is for … Upset: Seems like yours truly is the only one on the BBV staff crazy enough to pick the Giants to win on Sunday.

V is for … Vander Esch: Extraordinary Dallas linebacker Leighton Vander Esch is out with a broken collarbone. That’s a break for the Giants.

W is for … Woods: Xavier Woods, starting safety for Dallas, created a firestorm during the week with this remark:

“Our effort’s been good. I mean on certain plays some guys, me included, there may be a lack, but overall the effort is there.

“We’re in the NFL. You don’t expect guys full speed for 70 plays. That’s not possible. But you’re going to push all you can.”

X is for … Ximines: Second-year edge defender Oshane Ximines has been placed on injured reserve due to a shoulder injury. Maybe that opens snaps for Markus Golden.

Y is for … Why is the entire country being subjected to this game? Giants-Cowboys is in the national 4:25 p.m. ET slot Sunday. Big markets, bad teams. To be honest, if I’m a person who doesn’t have a vested interest in either of these teams, I’m finding something better to do than watch this game.

Z is for … Zeke: Dallas running back Ezekiel Elliott is averaging a career-low 3.9 yards per carry. Let’s hope Sunday isn’t the day he breaks out with a huge game. A makeshift Dallas line isn’t going to help.