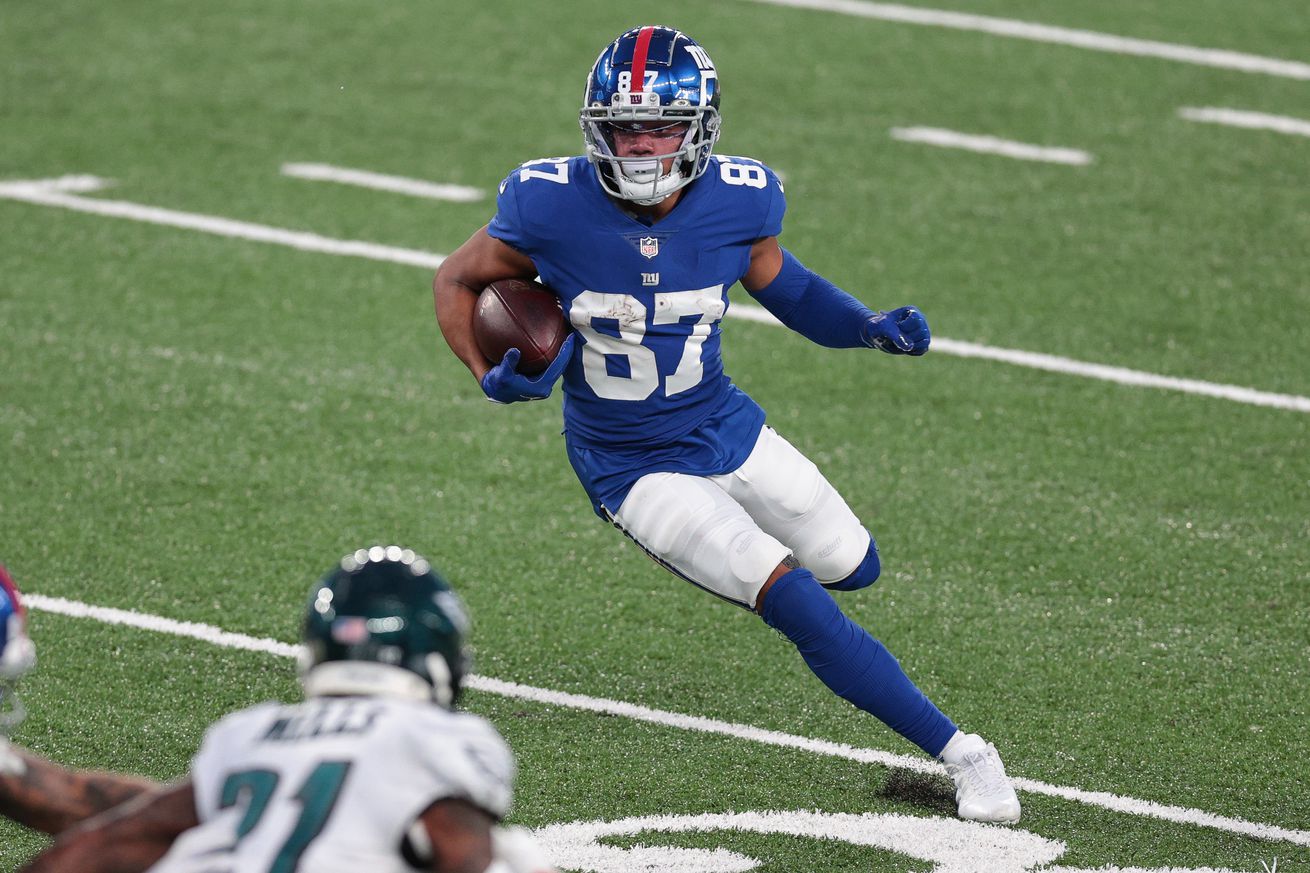 Looking at the numbers from the Giants game against Philly

The New York Giants will be going into their bye week with a 3-7 record after beating the Philadelphia Eagles 27-17 and picking up their second win in two weeks. The Giants — and Giants fans — are riding high after beating Philadelphia for the first time since 2016.

What can the numbers from the game tell us about the Giants’ win?

The Giants played a total of 71 snaps on offense, and despite speculation that the return of Will Hernandez would lead the Giants to an offensive line rotation, Andrew Thomas, Shane Lemieux, and Nick Gates played all 71 of the offensive snaps. We once again saw Matt Peart played 10 total snaps, his lowest total since he began rotating onto the field at right tackle, where he played 8 snaps (Cam Fleming played 63 of 71 snaps).

Hernandez did get onto the field when Kevin Zeitler was knocked out of the game with a concussion after 59 snaps.

Gallman has clearly emerged as the Giants’ starting running back following his strong performances in weeks 9 and 10. Running backs Alfred Morris (15) and Dion Lewis (14) both played about the same number of snaps.

The Giants played 67 total snaps on the defensive side of the ball, and an impressive five defenders played all of the Giants’ defensive snaps. Cornerbacks James Bradberry and Isaac Yiadom, safeties Jabrill Peppers and Logan Ryan, and LB Blake Martinez all stayed on the field for the entire game.

The Eagles played a bad game, pretty much from start to finish, and the Giants were able to capitalize on their mistakes early. The result was a game in which New York was able to seize control and never really let it go.

This was, pretty easily, the best game of Daniel Jones career as a Giant.

It wasn’t a perfectly clean game, but for the second game in a row his mistakes didn’t hurt the team. The ball was put in harm’s way a few times, but thanks to some fantastic adjustments and catches by the Giants’ receivers and fortuitous bounces on tip drills, the Giants didn’t have any turnovers.

Jones finished with an efficient performance in the box score, completing 21 of 28 pass attempts for 244 yards (8.7 per attempt), as well as 64 yards and a touchdown on 9 rushing attempts. Where Jones padded his completion percentage with quick throws of negligible value in other games, he attacked a weak Eagles’ secondary to the tune of an average 8.3 intended air yard and 8.5 converted air yards (per nflnextgenstats).

That 2.6 rushing EPA was also shared by Wayne Gallman Jr. who has emerged as the Giants’ best and most efficient backfield option. Gallman only averaged 2.9 yards per carry (53 yards on 18 carries) by the end of the game, but he picked up chunk yardage throughout the first three quarters and his average was impacted by his two short touchdown carries. Gallman once again found the majority of his success running between the tackles, with 15 of his carries, as well as both touchdowns, coming on inside runs.

The Giants receivers were generally able to get open and showed reliable hands when the ball got to them. Sterling Shepard caught all six of his targets, while Evan Engram’s lone incompletion was a fantastic 1-handed grab which the throw lead out of bounds.

If there is one area of concern for the Giants, it remains their pass protection. The Giants gave up 3 sacks, and (as of this writing) trail only the Eagles in sacks allowed on the season, as well as 8 quarterback hits. All told that’s 11 hits or sacks on 36 total dropbacks, or just over a 30 percent pressure rate.

By the end of the game the Eagles were getting easy penetration on almost every play. And by the fourth quarter, the Giants’ blocking had degraded to the point where even their running lanes had evaporated.

It is worth noting that this about coincides with the Giants being forced to shuffle their offensive line due to Kevin Zeitler’s concussion. However, the Giants had pass protection issues from the first snap of the game, which was a 5-yard sack by Derek Barnett.