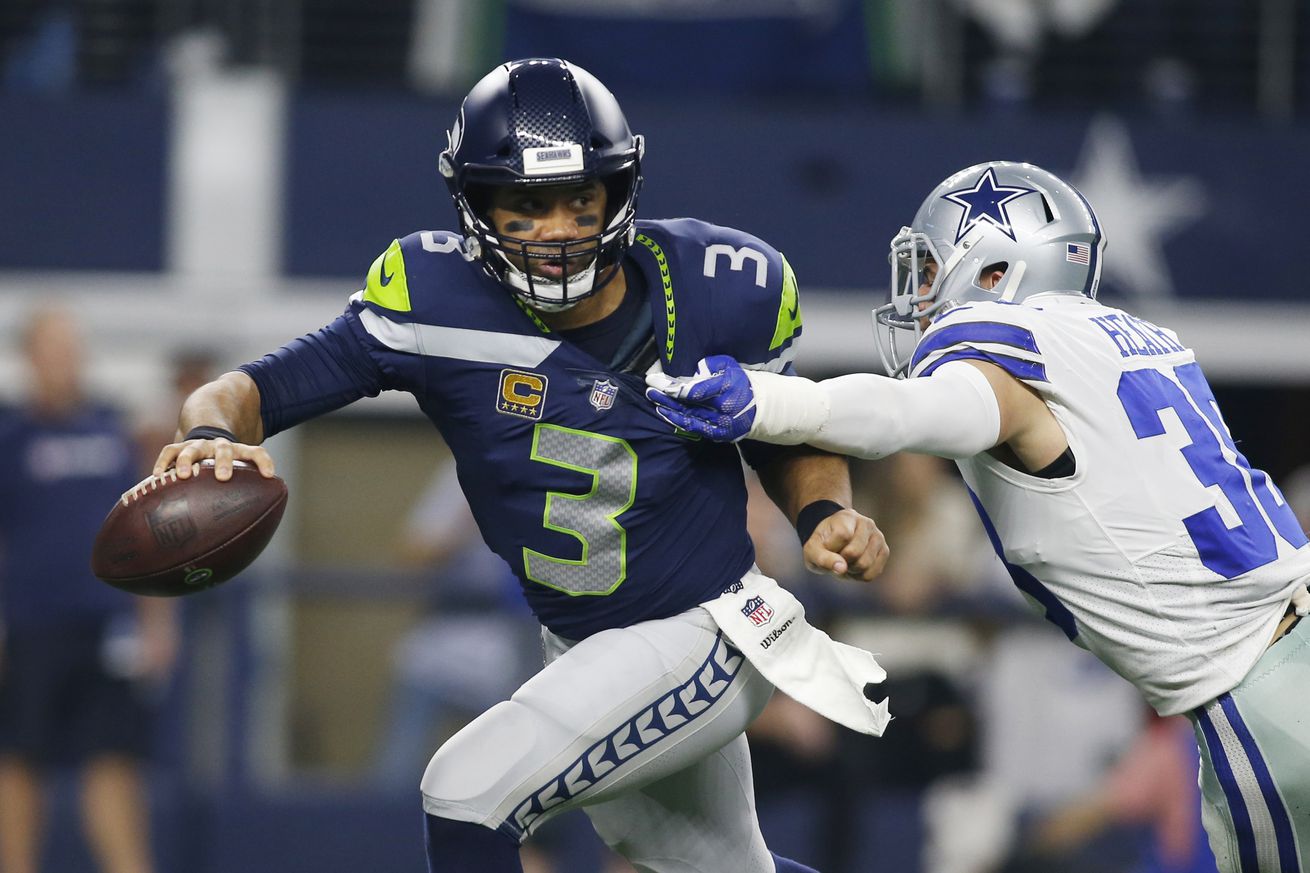 For New York Giants fans, the words from Tyrann Mathieu were like fresh meat thrown into a shark tank. They caused a feeding frenzy.

Meaning, of course, that Seattle Seahawks quarterback Russell Wilson — at least according to Mathieu — wants to play for the Giants.

As Ralph Vacchiano of SNY correctly noted that scenario is “probably not ever” going to happen.

Wilson when he was asked about the Giants rumors by Fallon on The Tonight Show back in March.

”I’m not sure if the Seahawks are going to let me get away,” he said.

He’s right. They’re not. Because they’re not dumb or crazy. And on a planet where there are barely 32 people talented enough to play quarterback at a high level in the NFL, and only a fraction of those exceptional enough to lead their team to a Super Bowl, teams know it would be absolutely insane to let a quarterback like Wilson get away.

That won’t stop the speculation. It won’t stop fans from dreaming, however far-fetched the idea. Vacchiano referred to it as “silly.”

I certainly understand the Wilson chatter. Giants fans are tired of watching the organization put a bad product on the field. They are even more exhausted by the constant discussion of when and how the Giants will move on from Eli Manning, not to mention why they haven’t done so already.

In the midst of the frenzy on Sunday, Chris Trapasso of CBS Sports tossed out a Wilson to the Giants trade idea that, to me, illustrates the folly of such a thing actually happening.

If Russell Wilson really wants New York, the Giants have an amazing opportunity to get their Eli successor.

I like Trapasso and I have had him as a guest on the ‘Valentine’s Views’ podcast. The Giants, though, would be making a huge mistake to give up that much for Wilson.

The Giants would get their quarterback, but what else would they have? They would, essentially, be giving away the premium portions of their next two drafts. How would they add the defensive play makers they acknowledge desperately needing? Where is the right tackle going to come from? A center? A receiver?

Oh, and trade Engram to boot? The guy who could benefit more than any other Giant from Odell Beckham Jr. being a Cleveland Brown, and who could be the second-best offensive player on the team behind Saquon Barkley? How do you replace what he does if you give up nearly all of your premium draft assets for the next two years?

Sure, you’re getting your quarterback if you make that deal. You are, though, probably sentencing him to the same fate that has befallen Manning in recent years. Almost certainly surrounding him with a cast of characters that won’t be good enough to win with.

Making a mega-move like that for a Wilson would be a sexy, splashy move. It would at least temporarily generate some excitement. Without the ability to add top-shelf talent around him, and stripping away some of what you already have to make it happen, would it really make the Giants better, though?

Wilson, 30, is in the last year of his deal with the Seahawks. The whole situation could come to a head on Monday as Wilson’s reps have given Seattle a deadline of today to reach a new deal. Read the entirety of King’s Wilson discussion in his ‘Football Morning in America’ column. The part that is directly applicable to the Giants is this:

I don’t know which way it’ll go, but I don’t think it’s time to shred the “3” jerseys yet. Gut feeling: At the very least Wilson plays in Seattle three more years. And a lot can happen in those three years.

Seattle could, after this season, use the franchise tag on Wilson for 2020 and 2021. So, as Wilson indicted above, the Seahawks do have control over him if they choose to exercise it.

Albert Breer of Sports Illustrated also breaks down the Wilson situation and says “We know Wilson will be the Seahawks’ quarterback in 2019.”

What about the money?

Wilson carries a $17 million base salary this season. Part of any deal to the Giants would have to include a new long-term deal that would cost the Giants far more than that per year.

What about Manning? Really, what about the money already committed to Manning for 2019? The Giants have already paid him a $5 million roster bonus. Cutting him would add another $11.2 million in dead money to the bloated $33.879 million the Giants are already carrying.

Doesn’t it make more sense long term to try and follow the path the Philadelphia Eagles took with Carson Wentz, the Kansas Chiefs with Patrick Mahomes, the Los Angeles Rams with Jared Goff? The Chicago Bears with Mitchell Trubisky?

That path, of course, is to continue to build the roster. To find a quality young quarterback and take advantage of the team-friendly rookie contract he will be on to add as much talent as you can around him.

That, at least, is what makes sense to me. Of course, I acknowledge the success of that hinges on finding the right young quarterback.

Wilson in a Giants uniform? A nice dream, and I absolutely understand why the idea is exciting to some. It doesn’t, however, seem practical. Or likely.