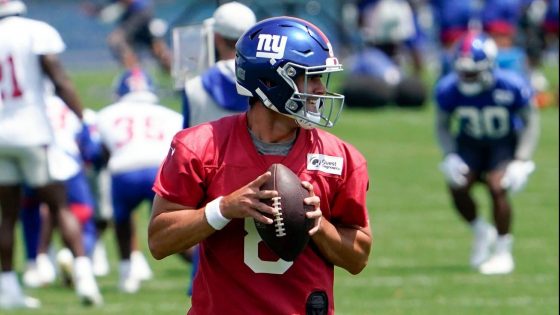 Daniel Jones and the team that drafted him over two years ago are on the hot seat — improvements must be made.

It’s difficult to say the focus is entirely on Daniel Jones in 2021.

Because that’s not altogether true.

He must develop, surely, but there are various areas the Giants must improve in outside of the quarterback position — the offensive line needs to surpass its mediocre-at-best status and the receiver room must step up with the new bodies it employs. Not to mention, the offensive play-calling at the hands of coordinator Jason Garrett needs to evolve (the Giants were 31st in both total yards and points last year).

The grand total of the pressure isn’t on Jones to lead this team back to the postseason. Fans wish to see the entire squad develop, making Phil Simms‘ recent take all the more interesting.

“If the Giants go 8-9 and Daniel Jones plays well and you can see that he’s the guy, Giants fans will be happy,” Simms told Steven Taranto of CBS Sports. “But if they go 8-9 and he doesn’t play well, then we’re gonna have that debate. ‘Oh, should they draft a quarterback, should they do this,’ or whatever. So it’s really a fine line there. But I think if he plays well, that will make a lot of people feel good regardless of the record. Now I’m not saying if they go 4-13 that people are gonna say, ‘Well, the quarterback played well, we really feel good about the organization,’ but I think you understand what I’m trying to say.

“It’s not Super Bowl. They’re not gonna win the Super Bowl, I feel pretty confident in saying that. But if they show really good progress, which I think they need to — and of course I’m saying that about the quarterback too, which he’s entirely, without question capable of doing. And now that they’ve surrounded him…You’ve got a guy that’s promising and could be a great tight end. The receiving corps, Saquon Barkley, fixing the offensive line. All these things lends itself to it should get done.”

Wait, excuse me? So if the team is average even after the moves made the last two offseasons, the fans “will be happy?” Just as long as the quarterback “plays well?”

The team, not just Daniel Jones, has struggled

Giants fans are impatient, that’s for sure, but it’s not entirely because Jones hasn’t fulfilled the expectations of a No. 6 overall draft pick. A significant component of their frustrations involves the fact the team hasn’t portrayed signs of consistent winning in years.

The 2021 campaign will mark the fifth season removed from the Giants’ most recent playoff appearance in January 2017 (the infamous “boat picture” game in Green Bay).

The only time the Giants were close to a postseason appearance during this horrid span was this past January, when one could argue they were a Jalen Hurts-Nate Sudfeld quarterback switch away from playoff football.

Don’t forget though, they still won just six games. They arguably were only in the mix that late in the year because of Cowboys quarterback Dak Prescott’s season-ending ankle injury in Week 5 (Dallas lost seven of its final 11 games when a healthy signal-caller could’ve helped the team run away with the division).

Regardless of how close the Giants may have been to reaching the playoffs last season, constant on-field success hasn’t been located in quite some time — that isn’t all on the quarterback.

Fans are hoping Jones develops into a top-tier signal-caller; the organization is banking on it.

But do not think fans would be satisfied with an average record just as long as Jones improves.

The fanbase is as anxious as ever, which is saying a whole lot considering this market is the impatience capital of America. Amid the moves made both this year and last, the fanbase sees no legitimate and valid excuse for continued losing.

Jones could have another year in which his touchdown-to-interception ratio isn’t ideal and he doesn’t find a resolution to his fumbling issue. He could also have a year in which he throws for around 4,000 yards, 30-plus touchdowns, and earns his inaugural Pro Bowl nod.

Either way, these fans wish for a double-digit win total — following these last two productive offseasons, they likely won’t expect anything less, such as an 8-9 mark.