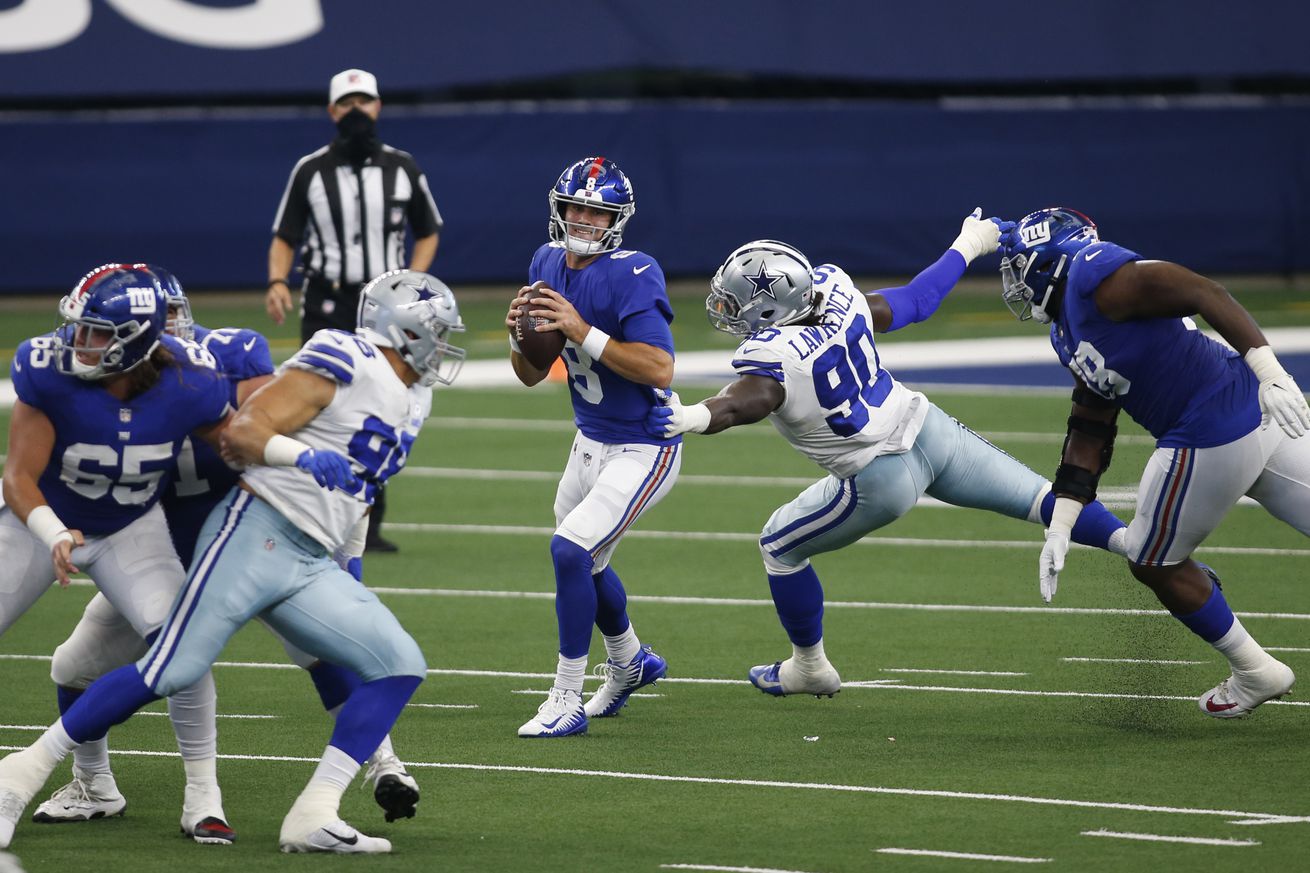 It’s time for some grades

Watch games and your eyes generally tell you the story of who played well and who didn’t. Pro Football Focus grades generally help us figure out if we saw what we thought. So, let’s see what those grades tell us about the performances of a variety of New York Giants players in Sunday’s 37-34 loss to the Dallas Cowboys.

If you watched, you saw how poorly Thomas fared in pass protection. He gave up one sack and, while it was the only time he got Daniel Jones hit, it led to a sack/fumble that cost the Giants 7 points. Thomas also surrendered eight — yes, eight — pressures and had a pass-blocking grade of a ridiculously bad 31.1.

The only tackle in the NFL other than Thomas and Fleming to grade below 53.0 was George Fant of the New York Jets (42.5).

The move to center is not going well for Gates. He graded at 42.6 on Sunday, which is right in line with his 43.3 overall grade for the season. Among 31 qualifying center, only rookie Lloyd Cushenberry of the Denver Broncos (36.8) has been worse.

The run blocking was actually good

There were places for Devonta Freeman and Wayne Gallman to run Sunday, and the PFF scores reflected that.

Darius Slayton had an elite day

Eight catches in 11 targets for 129 yards should tell you that. An elite PFF grade backs it up.

Darius Slayton had an elite performance against the Cowboys.

Early candidate for PFF’s week 5 team of the week

Tae Crowder played, but not well

It was good to see Crowder, Mr. Irrelevant in the 2020 draft, has worked his way into the lineup at inside linebacker in place of Devante Downs. Crowder got 49 snaps, 74 percent of the time the defense was on the field.

Crowder, though, graded at a poor 28.0. Let’s hope things get better from here.

Was it the Big Blue View jinx? After our Nick Falato broke down a solid Lewis’ performance in Week 4, Lewis didn’t fare as well against the Rams. Lewis was victimized by Michael Galluyp on the play that set up the cowboys’ game-winning field goal. He ended the day with a 33.8 grade and a 116.7 passer rating against, surrendering three catches on four targets for 63 yards.

In ‘Kudos & Wet Willies, Golden landed with a ‘Kwillie.” His PFF numbers tell you why. He had a half-sack, a quarterback hit and two pressures that led to a pretty good 73.7 pass rushing grade. He missed two tackles, had a face mask penalty and compiled only a 48.2 run defense score.