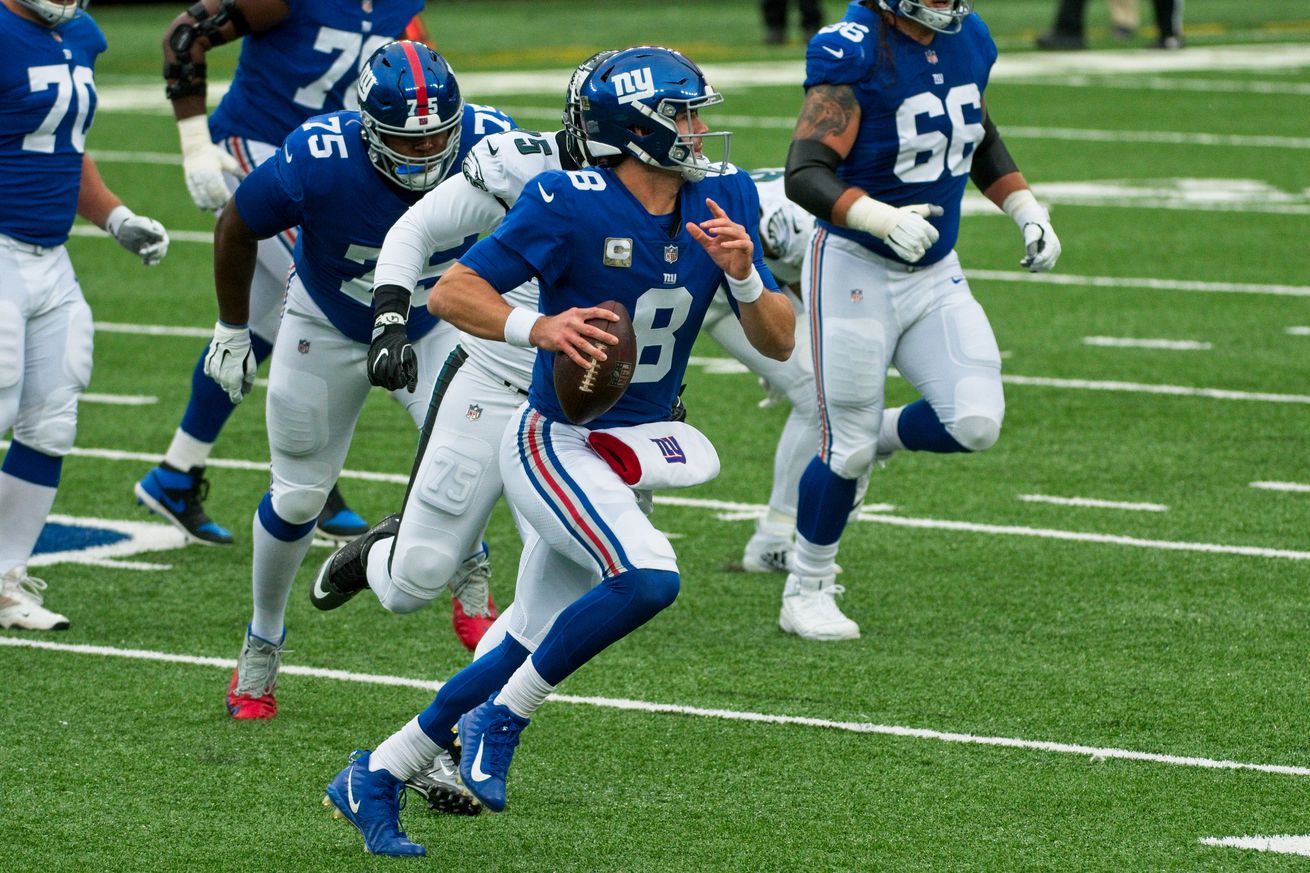 New York has an aggregated power ranking of No. 23 heading into Week 11

The New York Giants defeated the Philadelphia Eagles, 27-17, Sunday for their second straight victory. It was also their second consecutive game without a turnover.

Aggregating seven rankings from around the Internet, the Giants come out to an average ranking of No. 23 in the 32-team NFL entering Week 11. This is the best ranking the Giants have received all season and marks a five-spot jump from last week when they were ranked No. 28.

With Sunday’s win over Philly, the Giants are a half-game behind the Eagles in the NFC East and poised to compete for the division title with a 3-7 record. New York has a bye this week and will start up again in Week 11 against the Cincinnati Bengals.

Let’s check out what outlets around the league are saying about the Giants heading into Week 11 of the season:

They have at least two sacks in their first 10 games for the first time in eight decades. Maybe more impressive, 15 defenders have registered in the sack department, though none has more than five.

When Daniel Jones doesn’t turn it over, they have a real chance to win games. The defense is getting better by the week.

It’s entirely possible that the Giants are the NFC East’s best team. That’s not saying very much at all. But the Giants and their fans will probably take it at this point. QB Daniel Jones was reliable with his no-turnover performance in the victory over the Eagles.

Joe Judge’s squad has won three of five, including Sunday’s 10-point victory over Philadelphia, to place the Giants oddly but firmly in contention in the NFC East. Daniel Jones and the Big Blue offense haven’t committed a turnover in either of their past two games, and they just might pull this off if that trend continues.

Let’s go back to the Giants’ first meeting with Philadelphia, when Engram let a win slip through his hands. The Giants had an 11-point lead with just under five minutes left. After the Eagles made it a one-score contest, the Giants had a chance to put the game away. All Engram had to do was catch a perfectly lofted Daniel Jones pass down the left sideline with just over two minutes remaining. If he made the catch, the Giants would be 4-1 in the NFC East, with sweeps of Philadelphia and Washington, and they’d be 4-6 overall and in prime position to win the division with a cushion over the 2-6-1 Eagles.

After taking care of the Eagles on Sunday, the G-Men are within striking distance of first place. Not only that, but the Giants are playing the best football in the division. They’ve won two straight after a 1-7 start, and they gave the Tampa Bay Buccaneers all they could handle in a Week 8 loss.

Quarterback Daniel Jones has upped his accuracy and cut down on the turnovers that plagued him earlier in the season. A Giants defense that has been quietly solid over the past month gave up less than 200 passing yards and didn’t allow the Eagles to convert a third-down attempt.

The Giants can think about what have been in several close losses before they finished of late, twice against Washington and now against the Eagles. The defense is overachieving with key linchpin talent for Joe Judge and the offense is finding its balanced beat far removed from losing Saquon Barkley.