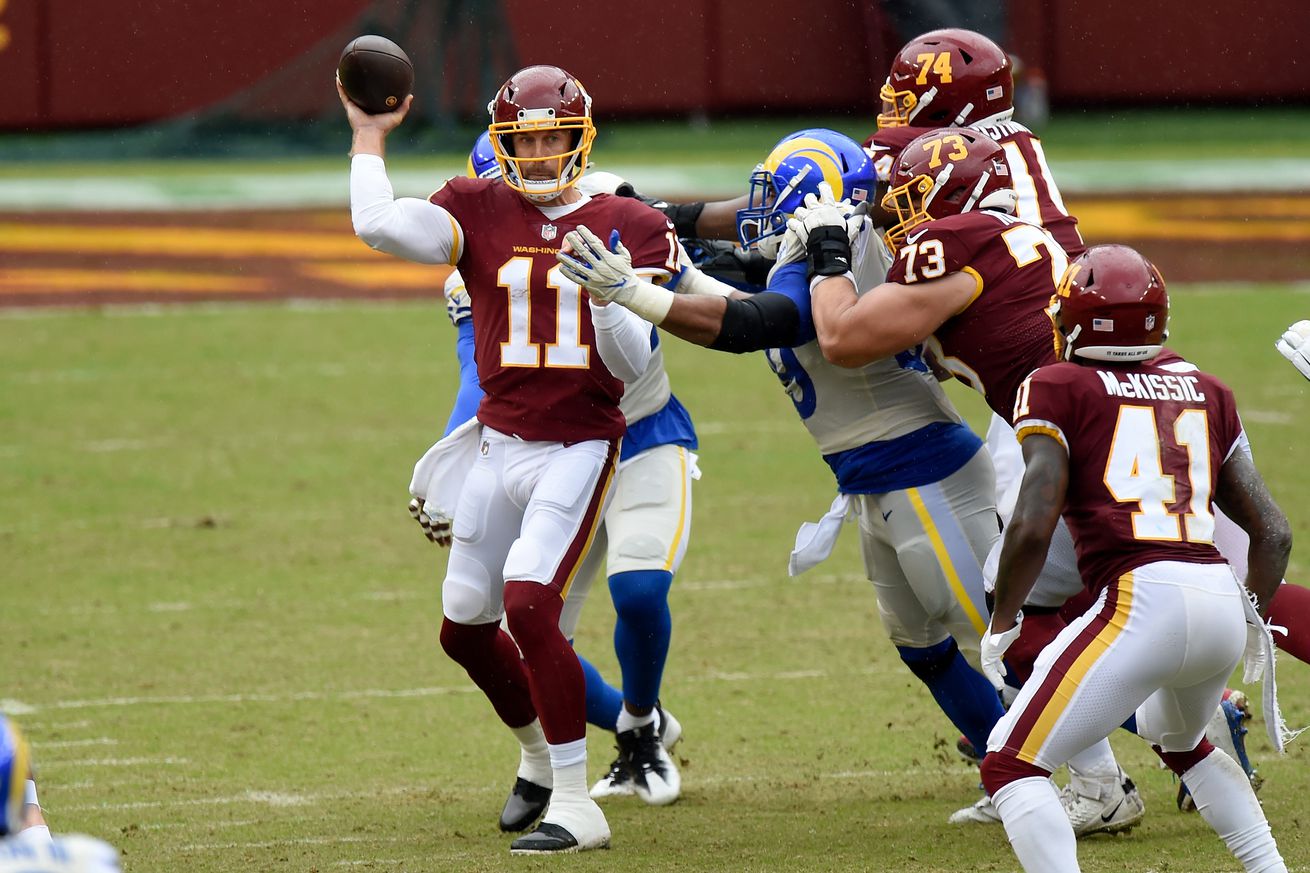 Here’s what’s happening around the division this week

There was something eerily poetic about what happened to the quarterbacks in the NFC East last Sunday. It was exhilarating one moment, and devastating the next.

First, it was the sight of No. 11 Alex Smith running out onto FedExField when Kyle Allen went down with an arm injury in the team’s game against the Los Angeles Rams.

The football world took a collective breath at the sight of Smith under center. It was his first time on a football field since November 18. He has since undergone 18 surgeries to repair a gruesome leg injury that was once life-threatening. When Smith returned to training camp this season, it was easy to simultaneously feel both respect and skepticism. Smith had fought his way back, defying odds and expectations. But even when external doctors and then team doctors cleared Smith to play football, it was difficult to imagine him actually doing so.

But he proved us all wrong.

The story of Alex Smith’s return to the field after 693 days is absolutely incredible. (via @thecheckdown)@WashingtonNFL | #WashingtonFootball pic.twitter.com/ooWWK4Ethc

It was a surreal, captivating moment that was much larger than any game. Add in the fact that Smith was also sacked six times due to an abysmal performance by the Washington offensive line, and the story becomes more inspiring.

But just hours later, as the New York Giants were playing the Dallas Cowboys in a key division matchup, Dak Prescott went down and his ankle twisted in a seemingly impossible direction. The cart came on to the field. Jason Garrett came over from the Giants sideline to check on his former quarterback. Players from both teams expressed their support as Prescott was driven off the field with tears streaming down his face.

Prescott has already undergone surgery for what turned out to be a dislocated and fractured ankle. His 2020 season is over. When considering the fact that Prescott was also playing on the franchise tag after both sides were unable to reach a deal this offseason, the news is more difficult to bear. Prescott will receive his guaranteed money this season, but what about next year? It’s very likely that the Cowboys use a franchise tag on him again, but there is no way to know how Prescott will perform after this injury.

The return of Smith and injury to Prescott highlight football’s impermanence. Yet, Smith’s comeback assures us that Prescott’s return is not questionable, but inevitable.

Let’s check out the other headlines around the division this week.

Though the NFC East is not leading the league in many categories at this point, it has not suffered from the virus outbreaks that have plagued other divisions.

The Eagles had their first experience with the coronavirus since head coach Doug Pederson tested positive back in training camp. Right guard Matt Pryor is on the reserve/COVID-19 list. According to NFL Inside Tom Pelissero, Pryor did not test positive for the virus, but he did come into contact with someone who did.

Pryor and Johnson are just two of seven players that the Eagles have ruled out for Sunday’s game against the Baltimore Ravens. The full list includes, DeSean Jackson, Alshon Jeffrey, Avonte Maddox, Duke Riley and Marcus Epps.

Though these injuries are largely not new for the Eagles, the impact continues to be frustrating especially considering that the team has just one win in five weeks of play.

Jackson will be missing his third straight game. He has played in just 185 out of 1,584 possible snaps (11.7 percent) since the Eagles traded for him. Not only could the Eagles have placed him on IR to free up a roster spot if they knew he would be out out this long, but they also gave the wide receiver a three-year, $27 million contract worth $13 million guaranteed.

Similarly, the Eagles have used a roster spot on Jeffrey week after week when they could have started him on the PUP list. The wait for his NFL debut continues.

The absence of Jackson and Jeffrey will allow other young receivers to get an opportunity to play, including Travis Fulgham, John Hightower and Greg Ward. If the Eagles can find some depth wherever they can get it, that would certainly help improve their chances moving forward.

With the loss of Prescott, attention shifts from the emotional impact of his injury to the logistics of game preparation. Andy Dalton will now be the team’s starter.

Considering Dalton only played about 20 minutes of the game against the Giants after Prescott left, we are working with a small sample size. He botched an exchange with center Tyler Biadasz, which resulted in and easy touchdown for the Giants. But he also made two superb throws at the end of the game to set up the Cowboys’ game-winning field goal.

During his time with the Cincinnati Bengals, Dalton got to the playoffs in each of his first five seasons, only to lose in the opening round.

The reality is that though the Cowboys are a different team without Prescott at quarterback, they don’t need him to win in the lowly NFC East. Dallas is leading the division with a 2-3 record and is still favored to come out on top despite the injury to Prescott. Five weeks into the season, Dallas has as many wins as the rest of its division opponents combined.

To improve matters, the Cowboys have the second-easiest remaining schedule in the NFL. Of course, a large reason for that is because Dallas still has five divisional games left. But overall, the Cowboys’ 11 remaining opponents have a combined record of 19-32-3. This translates to a strength of schedule of .380.

The competition was never fierce in the NFC East, but the Cowboys seem poised to do just fine even without their franchise quarterback.

Speaking of franchise quarterbacks, the Football Team recently benched what many believed to be their organizational QB for the foreseeable future. Four weeks into the regular season, head coach Ron Rivera benched former first round pick Dwayne Haskins Jr. (after he turned in his best performance of the season), for Kyle Allen.

Not only was Haskins sidelined, but he was demoted to third-string behind Alex Smith.

Despite Allen suffering an arm injury last week, he is poised to start for Washington against the Giants this week.

Haskins, for his part, was suffering from an illness for most of the week and missed two practices. He returned to the team facility Friday. Rivera said that the sickness was not coronavirus related and instead had to do with gastrointestinal issues. Haskins woke up feeling sick Sunday and did not attend the team’s game against the Rams.

Rumors have inevitably begun to circulate about Haskins’ future in Washington. According to ESPN’s John Keim, no team has called Washington about Haskins yet and Haskins has not requested a trade. Rivera has continued to stress Haskins’ development, but it remains unclear exactly how the Football team plans to use him moving forward.

Washington’s quarterback situation as a whole is murky. Allen turned in a small sample size last week before leaving the game with an injury, finishing 9-for-13 for 74 yards and one touchdown run. During his 12 starts with the Carolina Panthers in his sophomore season, Allen threw just one more touchdown (17) than he did interceptions and led the team to a 5-7 record. With just 14 career starts under his belt, Allen’s talent is still up for debate but his experience level is not.

Allen is certainly happy to know though that Washington activated Brandon Scherff off IR and he will get the start at right guard Sunday. After the Football Team surrendered eight sacks last week, they need all the help they can get on the offensive line.