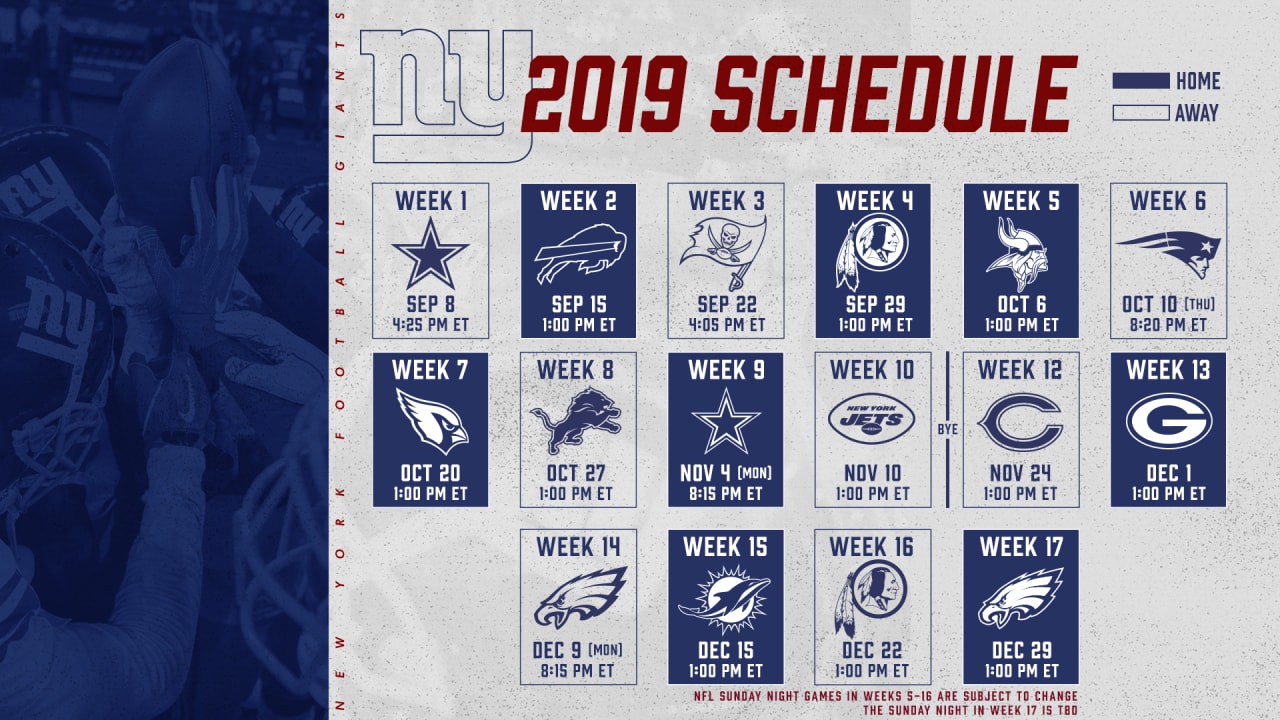 The following Sunday, Nov. 24, the Giants will visit the Chicago Bears in Soldier Field at 1 p.m.

The season’s final month will begin with a home game against the Green Bay Packers on Sunday, Dec. 1 at 1 o’clock. That will be followed by the Giants’ second Monday night game, in Philadelphia on Dec. 9.

The Giants will host the Miami Dolphins on Dec. 15 at 1 p.m. before concluding their season with two games against division opponents. They will face the Redskins in Washington on Sunday, Dec. 22 before hosting the Eagles in the finale in MetLife on Dec. 29, also scheduled for 1 o’clock.

Said Shurmur, “We play three division games in the final month, which is going to be important in determining how the season goes.”

The Giants also announced the dates and times of their preseason games.

The four-game schedule will begin with the annual MetLife Bowl vs. the Jets on Thursday, Aug. 8 at 7 p.m. The Giants will be the home team. It will be just their third opener in 51 preseason meetings with the Jets, and the first since 2010.

On Friday, Aug. 16, the Giants will host the defending NFC North champion Chicago Bears at 7:30 p.m.

The Giants will play on the road for the first time on Thursday, Aug. 22, when they face the Cincinnati Bengals in Paul Brown Stadium at 7 p.m.

On Thursday, Aug. 29, the Giants will play the New England Patriots in the preseason finale for the 15th consecutive year. Kickoff in Gillette Stadium is scheduled for 7:30 p.m.

They will play three of their preseason opponents – the Jets, Bears and Patriots – in the regular season.

“Flexible scheduling” will be used in Weeks 12-17 (the Giants will be in Chicago for the first of those weeks). Under flex scheduling, game times can be changed, and games currently scheduled to be played on Sunday afternoon can be moved to Sunday night on NBC. Flexible scheduling will not be applied to games that are played on Thursday or Monday nights.

Some highlights from the Giants’ 2019 schedule:

*The Giants do not play road games on consecutive weeks. They are visitors in back-to-back games, but the first of those contests is against the Jets, and the bye week is between the two games. They play consecutive home games just once, in Weeks 4-5 against Washington and Minnesota.

*Seven of the Giants’ eight home games are currently scheduled for 1 p.m. kickoffs. The exception is the Nov. 4 Monday night game vs. Dallas.

*In 2019, the NFC East will play the NFC North and the AFC East. Last year, each of those divisions had one playoff team, though the latter featured the defending Super Bowl champion Patriots. The Bears were the NFC North champions.

*The Giants will play six games against 2018 playoff teams: Philadelphia and Dallas (twice apiece), plus Chicago and New England.

*The Giants will play their final regular-season game at home for the third consecutive season and the eighth time in nine years.

*The Giants are currently not scheduled to play any Sunday night games.

*The Giants are 4-5 in Thursday night games since 2008, including 2-4 on the road. The Giants will face an AFC team on Thursday night for the first time since they lost in Denver on Thanksgiving night 10 years ago.