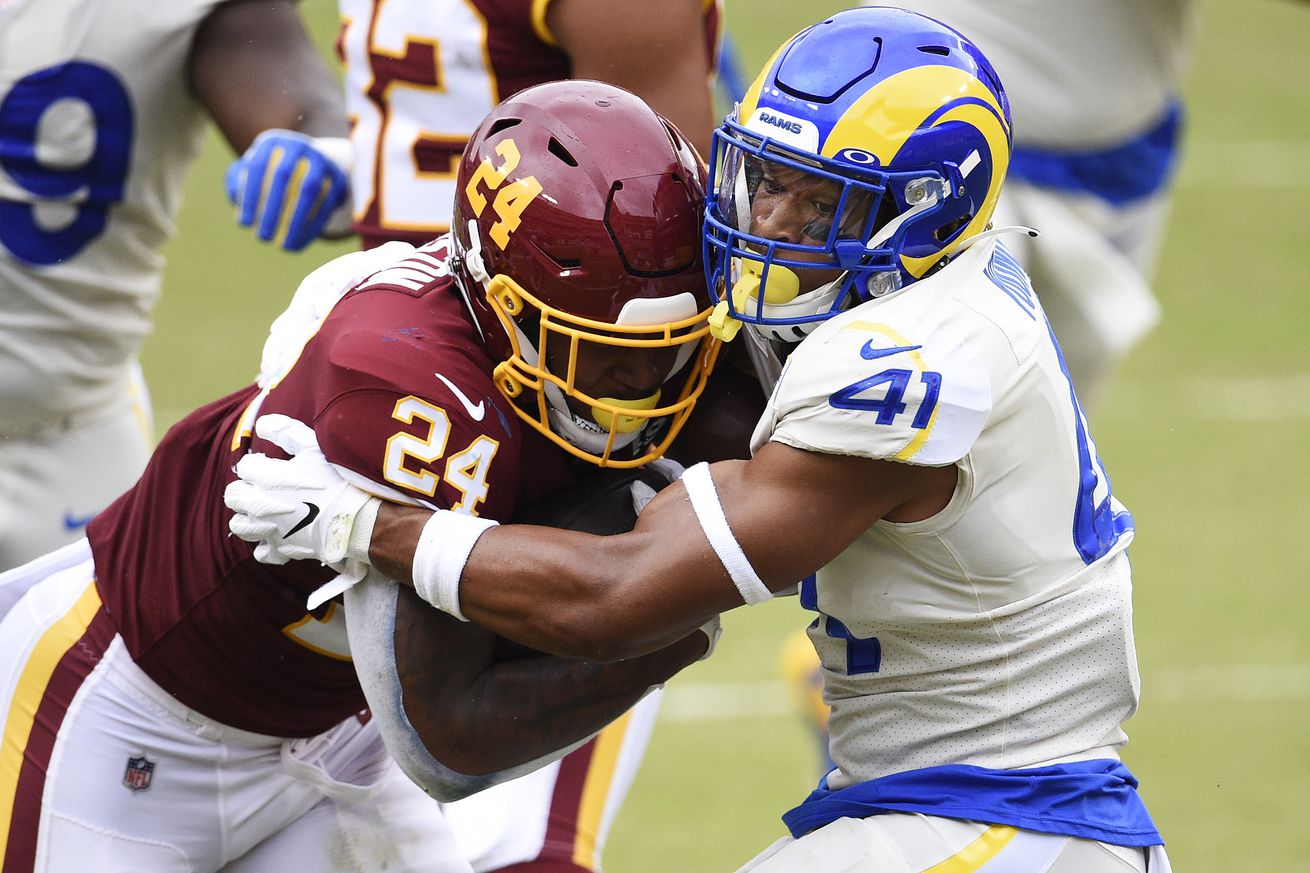 Let’s look at how the giants’ defense matches up

The 0-5 Giants will host the 1-4 Washington Football Team Sunday in an Week 6 NFC East showdown. By most metrics, both teams are bottom five NFL teams; the Giants have struggled to finish drives on offense, and the Football Team’s offense is just as bad. Despite the resilient and uplifting storyline about Alex Smith seeing NFL action again, the Football Team will roll with Kyle Allen in Week 6.

Washington is coming off a home game against the Rams where it had a total of 108 offensive yards. Second year quarterback Dwayne Haskins seems to have fallen out of favor with the Ron Rivera coaching staff, and it remains to be seen if he’ll dress against the Giants.

The poor statistics for Washington don’t necessarily reflect the current state of the team. Kyle Allen actually led a touchdown drive last week before leaving the game to be checked for a potential head injury. Coach Rivera made a decision to keep Alex Smith on the field, even though Allen was healthy, and the offense couldn’t muster anything against Aaron Donald and the Rams defense.

Allen knows offensive coordinator Scott Turner’s system from their time together in Carolina. Allen was hurt towards the end of the second quarter in week 5. He had 9 completions on 13 attempts for 74 yards, and a rushing touchdown. Outside of a 10-play, 73-yard drive, Allen couldn’t sustain anything more than a five-play drive before leaving the game

The skill position players for the Football Team are modest, but they have two very talented young players: rookie running back Antonio Gibson and second-year wide receiver Terry McLaurin. Gibson has 55 rushing attempts for 213 yards (3.3 yards per carry), along with three scores on the ground. The rookie out of Memphis is more known as a pass catching option out of the backfield; he has 15 catches on 17 targets for 122 yards. Gibson is very good in space, and Washington attempts to utilize different types of screens to get him rolling with blockers in front:

Turner will also split him out wide and throw wide receiver screens to him, since he did a lot of that in college.

J.D. McKissic is another running back who will be utilized in a similar manner. McKissic has more receptions on the season than Gibson, and he’s a very good athlete as well. Both of these players can be dangerous, so defensive coordinator Patrick Graham needs to ensure the rallying Giants’ defense continues to flow to the football when they’re playing soft zone in the short to intermediate parts of the field.

As far as receivers go, McLaurin is the main guy and he was just shut down by Jalen Ramsey and the Rams. McLaurin should see a lot of James Bradberry, which would put a lot of pressure on Washington’s Dontrell Inman, Antonio Gandy-Golden, and Isaiah Wright. The vast majority of snaps, McLaurin lines up outside and he’ll line up about 15 percent of the time in the slot.

McLaurin has seen 46 targets and caught 29 of them for 413 yards and one touchdown. The next receiver who has the most catches is Dontrell Inman with 12, and he happens to have two touchdowns. The wide receiver corps for Washington is among the most unproven in the league. In third down with Allen at quarterback last week, the Football Team ran five wide with McLaurin and McKissic in the slot. If they wanted a six-man protection, they would keep McKissic in to block at and have gigantic tight end Logan Thomas tight in a two-point stance; their goal is to create mismatches with either size or speed; Thomas with size, McLaurin with speed.

On this play, McKissic is motioned out to the boundary, and a mismatch is created with McLaurin in the slot against linebacker Troy Reeder (51). Similar to the Giants, there’s going to be a lot of quick passing concepts, some play action rollouts, and a lot of running back involvement with the passing attack. Outside of McLaurin the receiving options are lackluster, and they haven’t done a good job getting Logan Thomas involved.

Washington’s offensive line is beat up. Their star guard Brandon Scheriff is on I.R. The unit gave up 8 sacks against the Rams and left guard Wes Martin gave up 3 sacks, along with 5 pressures; Aaron Donald isn’t an easy person to block. The Giants should win the upfront matchup against this offensive line, especially with Leonard Williams, Dalvin Tomlinson, and Dexter Lawrence. With the injuries to Oshane Ximines and Lorenzo Carter, the Giants are going to struggle to generate pass rush from just Markus Golden, Kyler Fackrell, and maybe Cam Brown and/or Carter Coughlin.

This is a very winnable game for the New York Giants. Patrick Graham needs to stop Terry McLaurin with James Bradberry and continue to occupy the middle of the field with their zone coverage switches. This will force Kyle Allen to dump the ball off to players like McKissic and Gibson. If that does transpire, it’s on the Giants to rally towards the football and make sound open field tackles to prevent yards after the catch. The Giants are looking for their first win in the Joe Judge era, and I feel they’ll receive it at home against Washington.