The Giants have finalized a four-year, $41MM extension with wide receiver Sterling Shepard, a source tells Mike Garafolo of NFL.com (on Twitter). Prior to the extension, Shepard was set to hit the open market after the 2019 season. 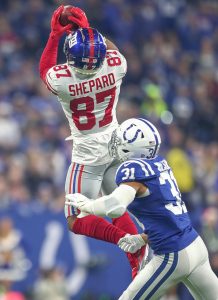 Shepard, the team’s longest-tenured receiver, is now the club’s highest-paid player at the position. It’s a larger than expected deal for Shepard, especially since his skill set mirrors that of new acquisition Golden Tate.

By the same token, the Giants will be relying on Shepard even more now that Odell Beckham is out of the picture. He’ll look to build off of a career year in 2018 when he hauled in 66 receptions for 872 yards and four touchdowns. The 26-year-old spent most of the year in the slot, though he also lined up outside towards the end of the year while OBJ was sidelined.

The former 2016 second-round pick and Tate are set to headline the Giants’ WR depth chart with support from the recently re-signed Russell Shepard, Corey Coleman, Bennie Fowler, Cody Latimer, and others.